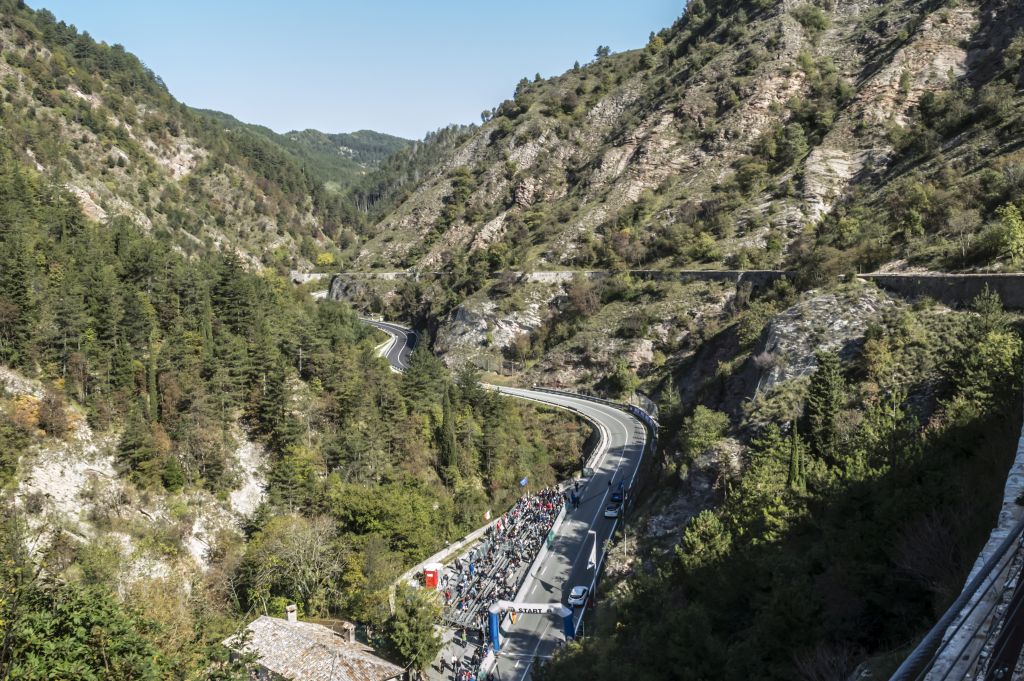 What a terrific motorsport festival at the FIA Hill Climb Masters in Gubbio, Italy! For the crown of the Hill Climb, 170 race cars from 21 nations traveled to the Umbrian town at the foot of Monte Ingino in the Apennines. 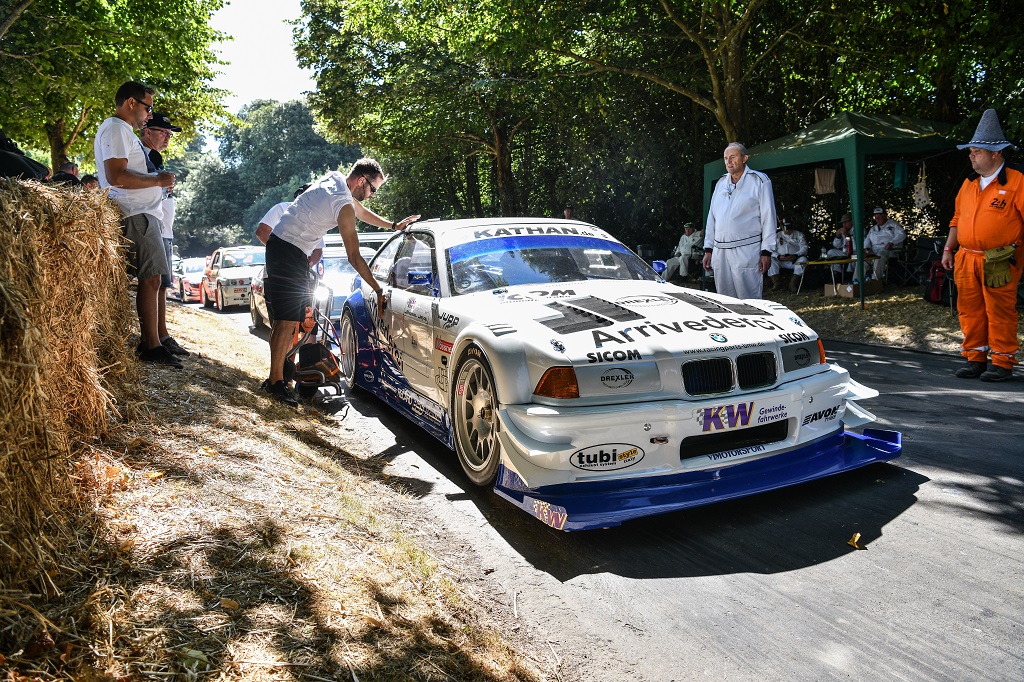 To the delight of numerous fans, under the varied field of participants was also the legendary “Georg Plasa BMW 320 Judd V8”! After the spectacular appearance at the Goodwood Festival of Speed in the summer of 2018, no further use of the “Never-Forget-Tribute-To-Georg-Plasa-KW-Team” was planned.

But Jörg Weidinger’s daring exploits in the garden of Charles Gordon-Lennox, 11th Duke of Richmond in Goodwood, not only caused waves from a sporting point of view. The legacy of Georg Plasa lives on and was again on everyone’s lips with his spectacular performance in the UK. 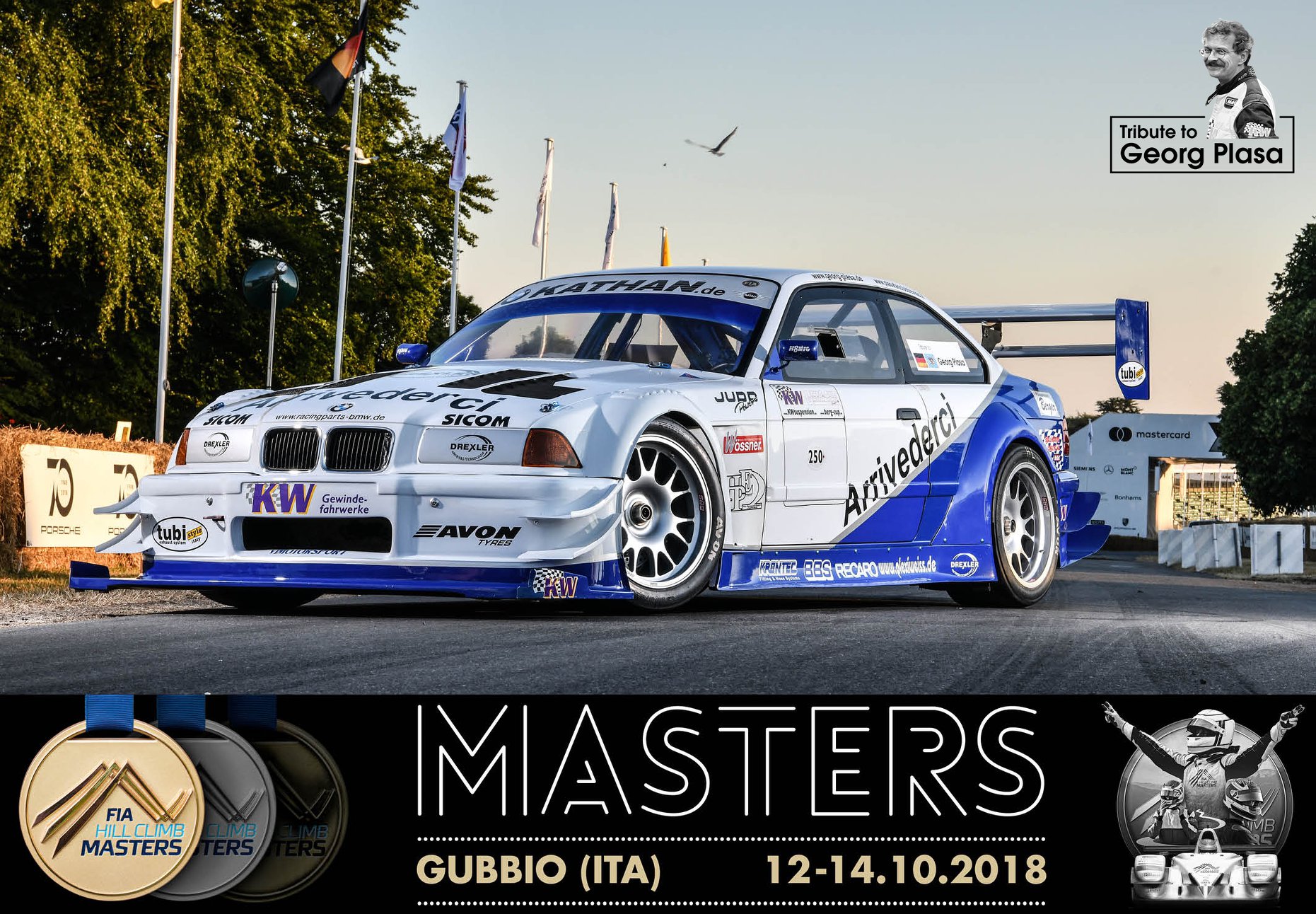 At the beginning of September, the team received an official invitation from the FIA to the Hill Climb Masters in Italy. We just could not say no to that. Who could? Above all, this was the opportunity for us to show the BMW 320 Judd V8, which had long become an icon of hill climb racing, in front of an Italian backdrop. If you have heard of Georg Plasa, you know that the German racer had a fatal accident in his BMW 134 Judd during a hillclimb race in 2011. Klaus Wohlfarth, founder and CEO of KW automotive, was a close friend of Georg and his death was a heavy stroke of fate for him, just like for the family of Georg, friends and the entire European mountain racing community.

For all of you who don´t really know about the myth of Georg Plasa, we try to put into words why Georg was so special. But first of all, words simply cannot do justice. He was too much of a devil in the cockpit and a kind-hearted person in the paddock and off the race track, with an open ear for fans and fellow racers.

Georg Plasa lived for hill climb and was someone who never thought just of his own team or of himself as a driver. Much more he stood up for the interests and needs of the hill climb sports community. In addition, Georg was a real pioneer in motorsport and especially for the down-to-earth hill climbsports. In the late nineties, the Munich-born racer began to raise the level of development of hillclimb racing cars in the touring car class to a technical level that many previously considered impossible. 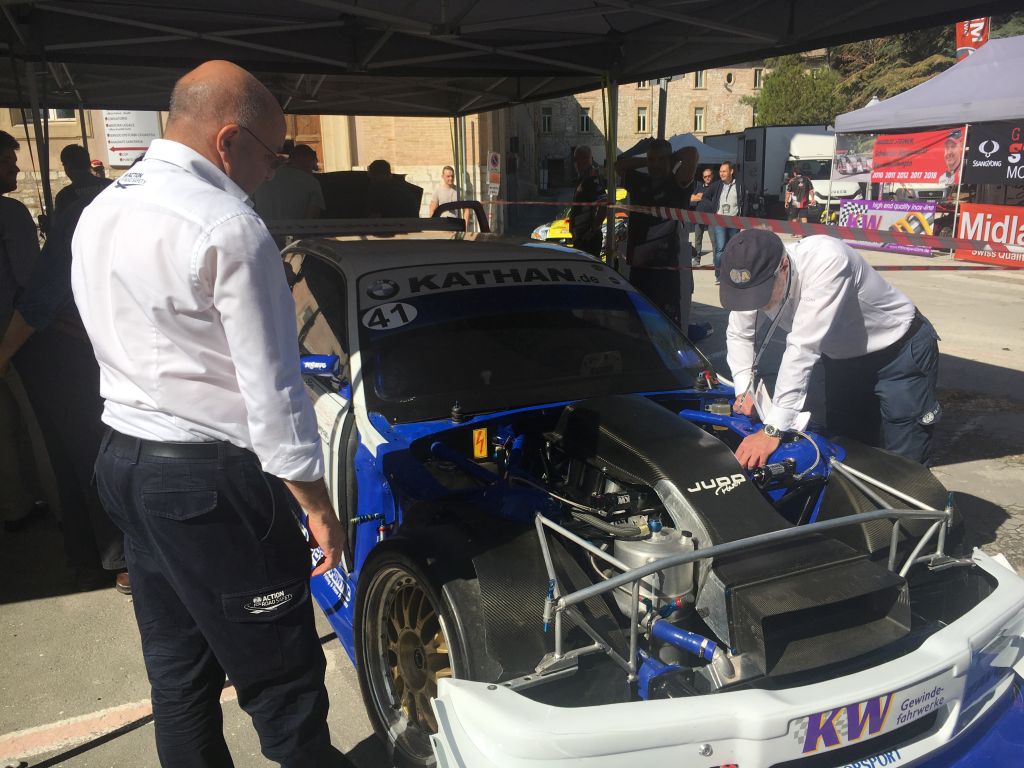 When racing-ABS, traction control, sequential gearboxes, drive shafts made of carbon fiber slowly gained acceptance in touring car racing, he began to use this advanced technology in his BMW E36 in amateur sports. Georg was also the first on the hill, who used a 3,4-liter Judd KV675-V8 from the prototype motor sport. Georg always shared his tips and experiences with the hillclimb racing family, so in his eyes, the entire sport community could benefit from it and the hillclimb world remained competitive with each other. A unique guy with his heart in the right place. 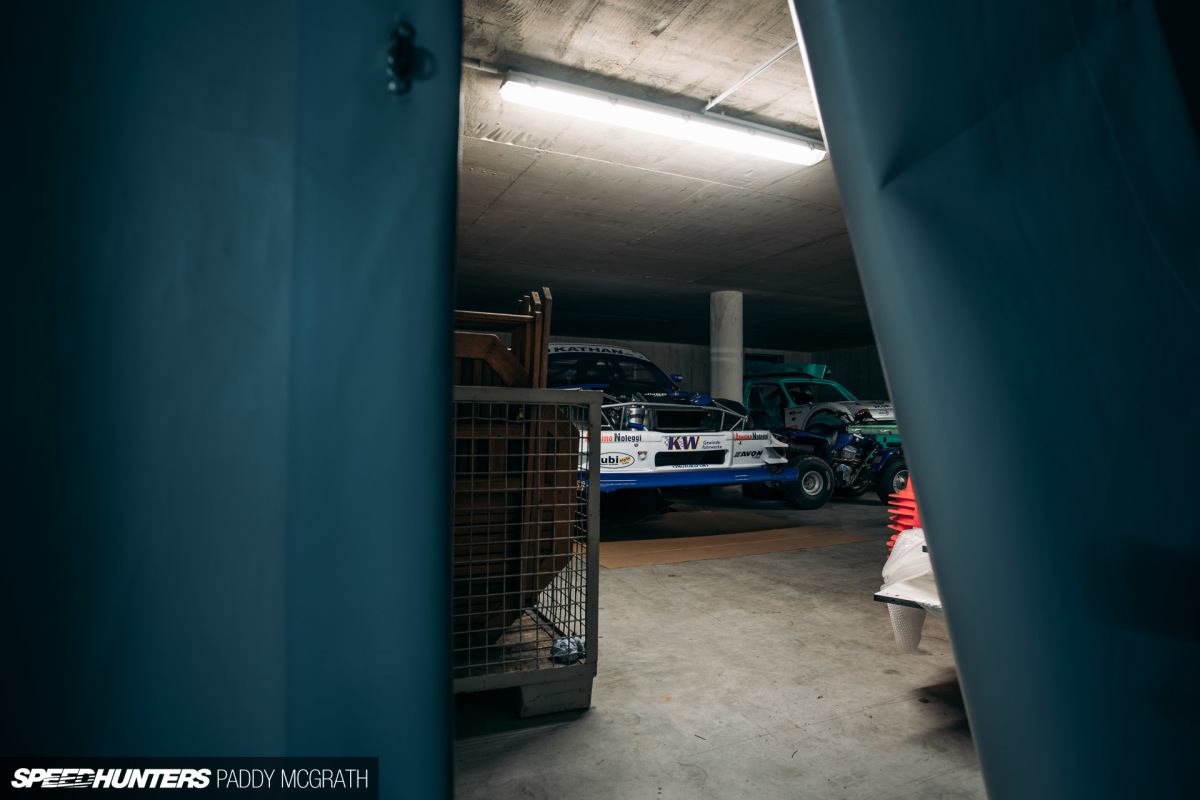 Klaus Wohlfarth decided to keep Georg’s old 320 as a motorsports memory and to rebuild it someday, so that his memory would not fade away after his death. He was worried that someone would use Georg’s former BMW 320 Judd V8 only as a parts donor. But that’s different story which you can find on our KW automotive Blog. Enough of reminiscing, after all, Georg was always looking forward and so it was an honor for Klaus and Jürgen Wohlfarth to comply with the request of the FIA to travel to Italy along with the “Never-Forget-Tribute-To-George-Plasa-KW-Team”. 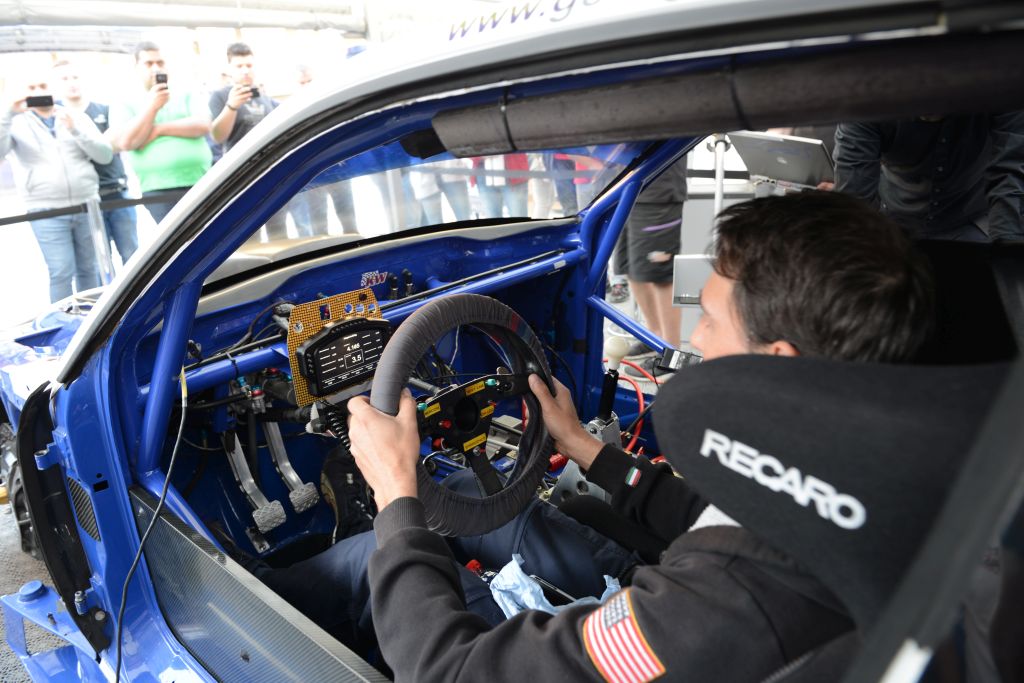 The great thing about it, even former veterans from Georg Plasa’s ex-team and friends like Martin Burmeister, Andreas Weber as well as hill climbing colleague Jörg Weidinger immediately confirmed to come as well. In addition to the memory of Georg and the friendship with him, we all have a great love for motorsport and especially for hill climbing – a passion that the organizers of the FIA Hill Climb Master probably did not expect. 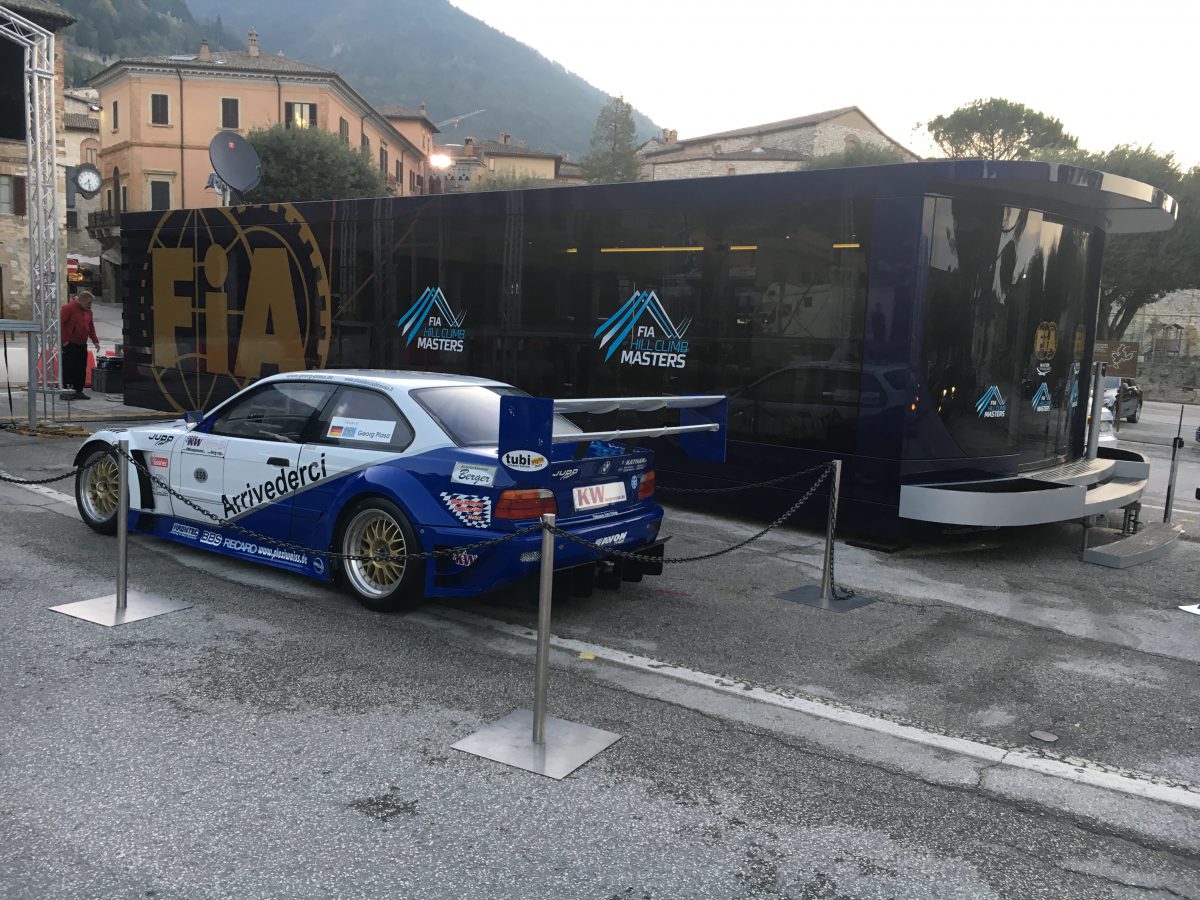 So often in motorsport, it usually comes differently than planned. The FIA representatives of the Hill Climb Master simply assumed that we will just “park” the BMW in the city center as a crowd puller and that´s it. After all, Georg was one of the most popular racers in the Italian motorsport community, Italy was in a way almost his adopted home. During the first telephone call to plan the appearance in Gubbio with concrete actions, team manager Oliver Scherbaum surprised FIA contact person Vincent Caro with his question in which class the BMW in Gubbio would start. After a long silence at the other end of the line and Vincent asked for some time to think about it. 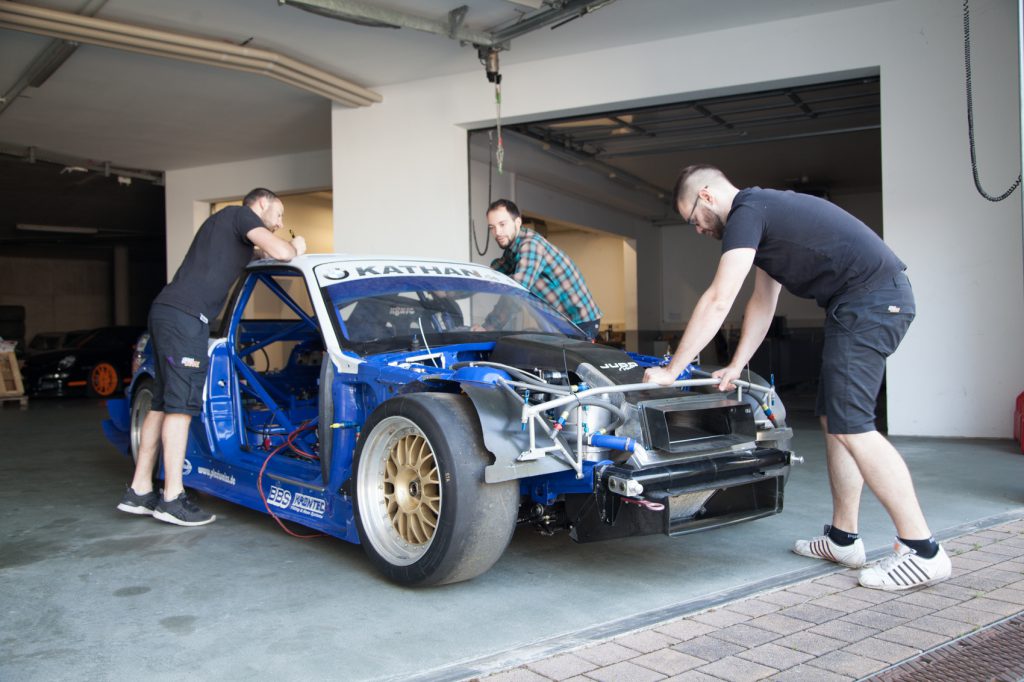 A few days later we received the green light for our sportsmanship in the form of a wild card. Mille grazie! The BMW 320 Judd V8 comes back to Italy – goose bumps. The anticipation of Gubbio was a little clouded by our “technocrats”. Many parts of the race car had to go into revision, as Jörg was only able to drive with “half throttle” and drove on the track at Goodwood without racing ABS and traction control. In addition, there was still other spare parts that was not ordered and work on the BMW could only happen after the end of a working day. Who cares! In the end with so much work to complete the night shifts turned into days shifts to get the car finished, after all “Bella Italia” was calling! 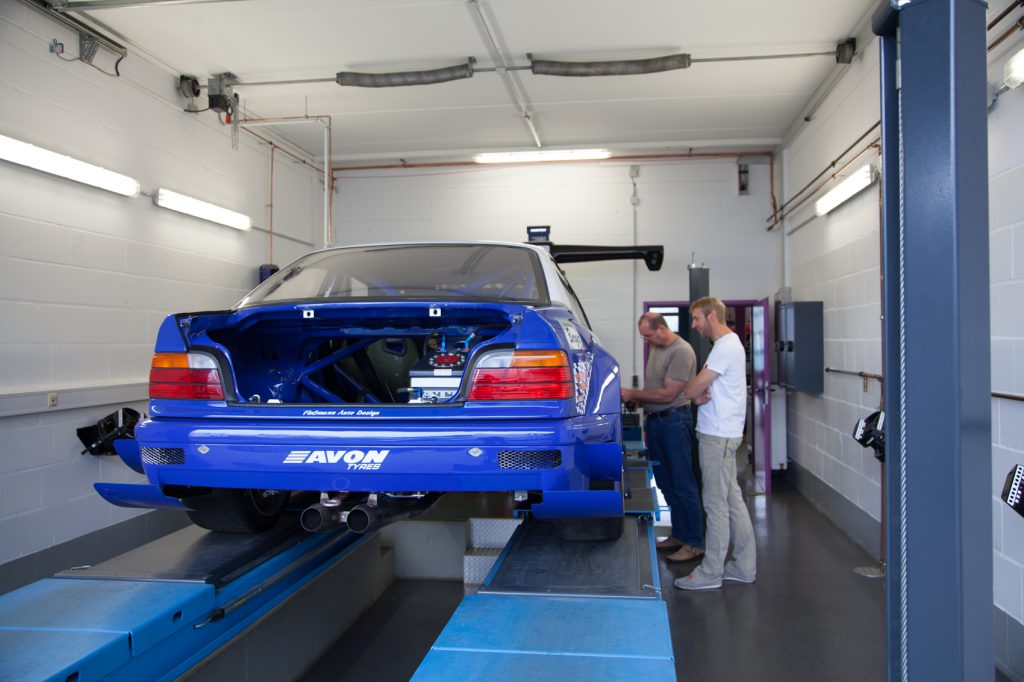 Despite all this, we were only able to prepare the BMW 320 Judd V8 on the day of departure in a way that we could once again return to Boxberg on the Bosch Test area to check the latest work. After the successful testing, the KW truck finally headed for Umbria in the early evening. Not even 200 km later on the highway. A bang. Did a broken tire really want to stop us? After this unplanned stopover, our KW truck arrived a little later than planned in Gubbio. But still in time.

When we were building up the canopy of our truck in front of the historic backdrop in the old town of Gubbio, the first fans strolled along the paddock. Many racers, who used to fight hot duels with Georg to reach the best times, could hardly wait to finally see the BMW 320 Judd V8 live again. 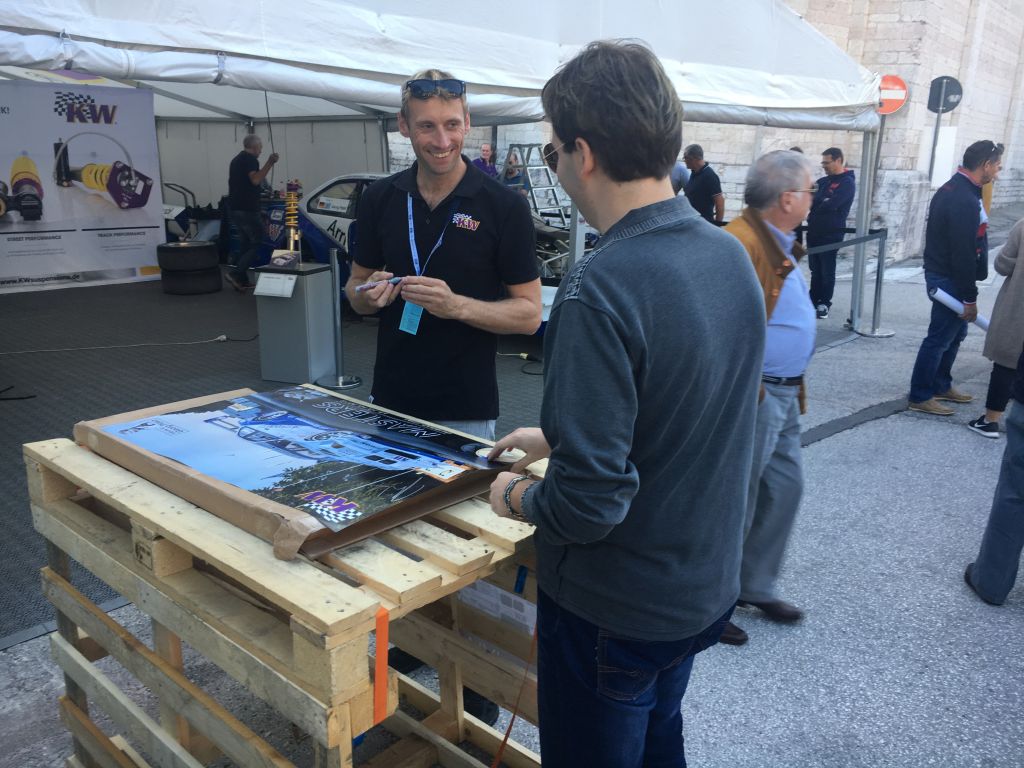 A fest for the heart and full of melancholy, during the petrol talks we remembered the legendary times with Georg on the mountains. Even Reto Meisel, a friend, companion, and one of George’s toughest opponents on the hill, also had a lump in his throat when he saw the BMW 320 Judd V8 up close. Unfortunately, we didn´t manage to get a group picture with Georg’s BMW and Reto’s Mercedes SLK Judd V8. 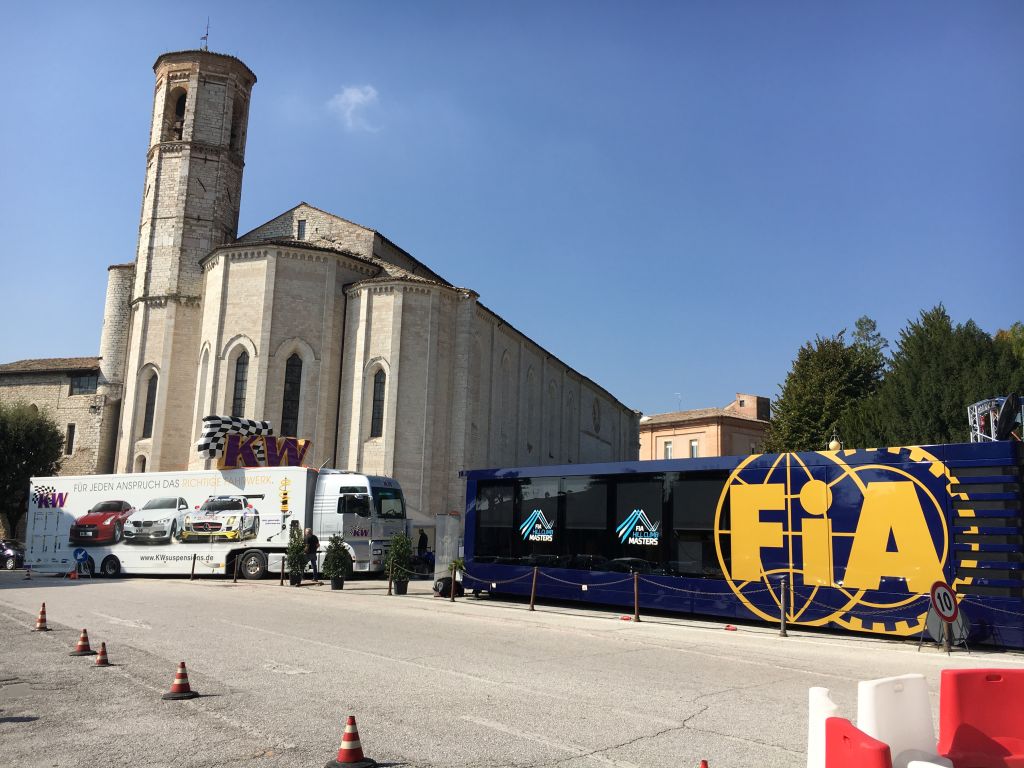 After the first track inspection and the final preparations for Saturday, the BMW was heading to the start at the crack of dawn. The start is 556 meters above sea level. Hill climbing races have been held in Gubbio since 1966, and in 2018 a new course layout celebrated premiere for the FIA Hill Climb Masters. It was a very emotional feeling to stand with the Judd in the pre-start and not just to park in the paddock. 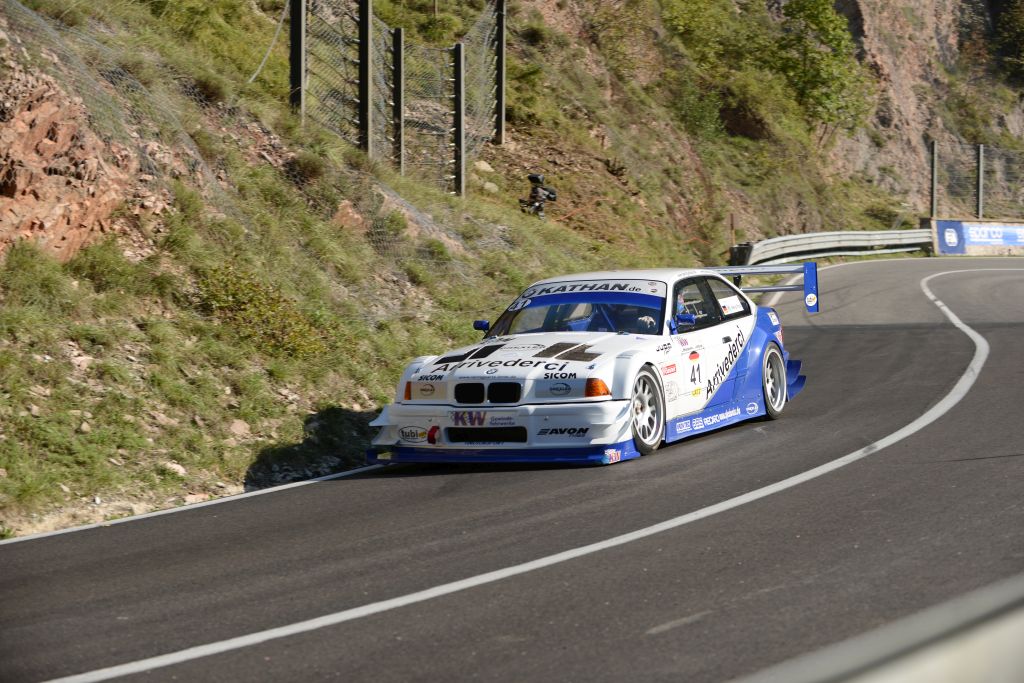 At a total of 3,3 kilometers, the new course winds with a succession of almost exclusively fast corners and almost no intervening straights as well as four hairpin turns and many of full throttle turns to the finish.

The drivers must overcome a 221 meters height with an average gradient of 6,1 percent – the ideal territory for the BMW 320 Judd V8 of the “Never-Forget-Tribute-To-Georg-Plasa-KW-Team”. 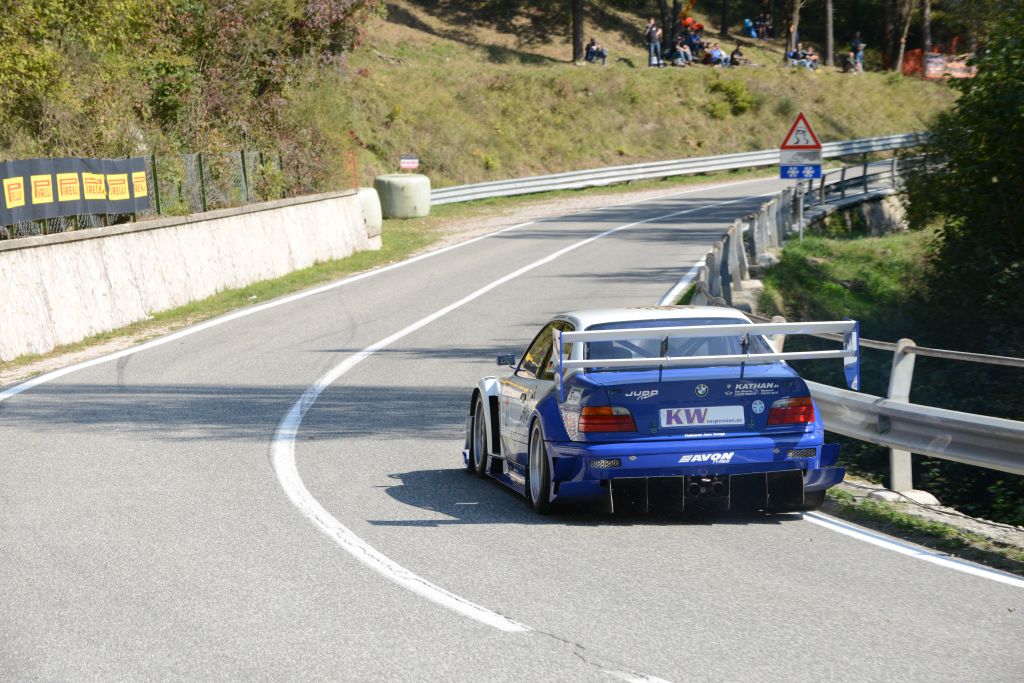 Driver Jörg liked the new track layout right away, setting strong times during the practice session. With a time of 1,31.93 minutes, the BMW left the second practice as the fastest touring car of the entire field from the day – and all that with still many teething problems on the vehicle! Georg’s race car based on a 28-year-old chassis was actually able to compete with the current crème de la crème of the FIA Hill Climb Masters – unbelievable. 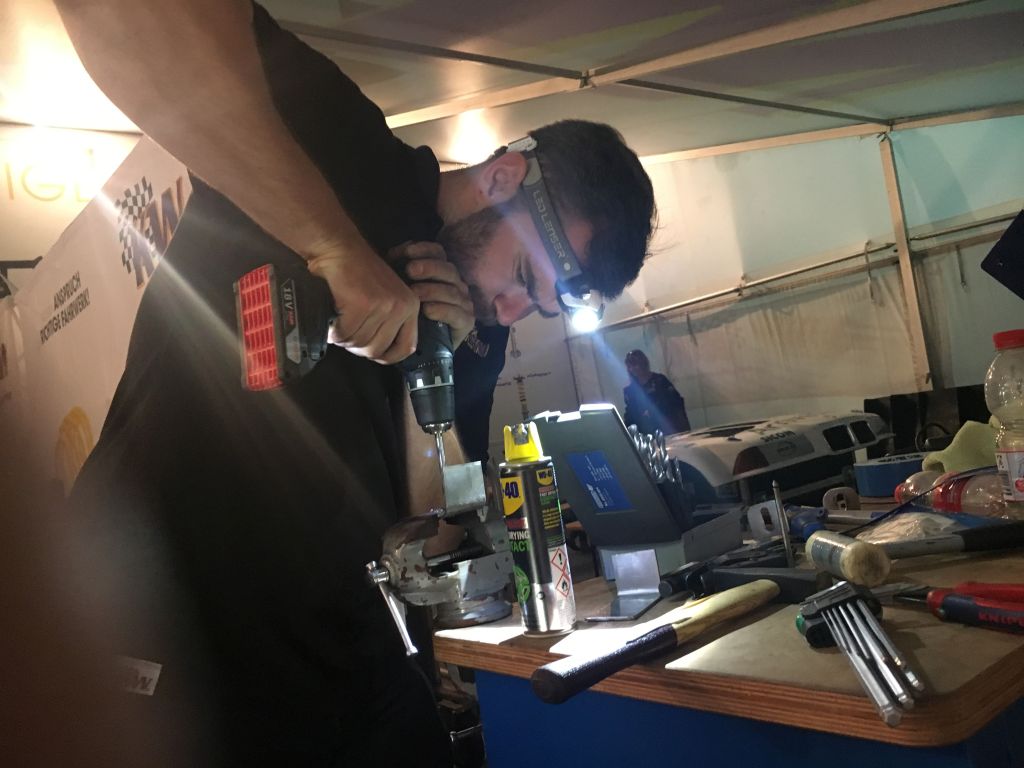 In the night from Saturday to Sunday there was a lot of activity in our mobile paddock. The technical crew with Martin Burmeister, Andreas Weber, Matthias Ovelhey, Felix Hälsig and Bernd Leykauf prepared the BMW for the race Sunday, and it got very late. 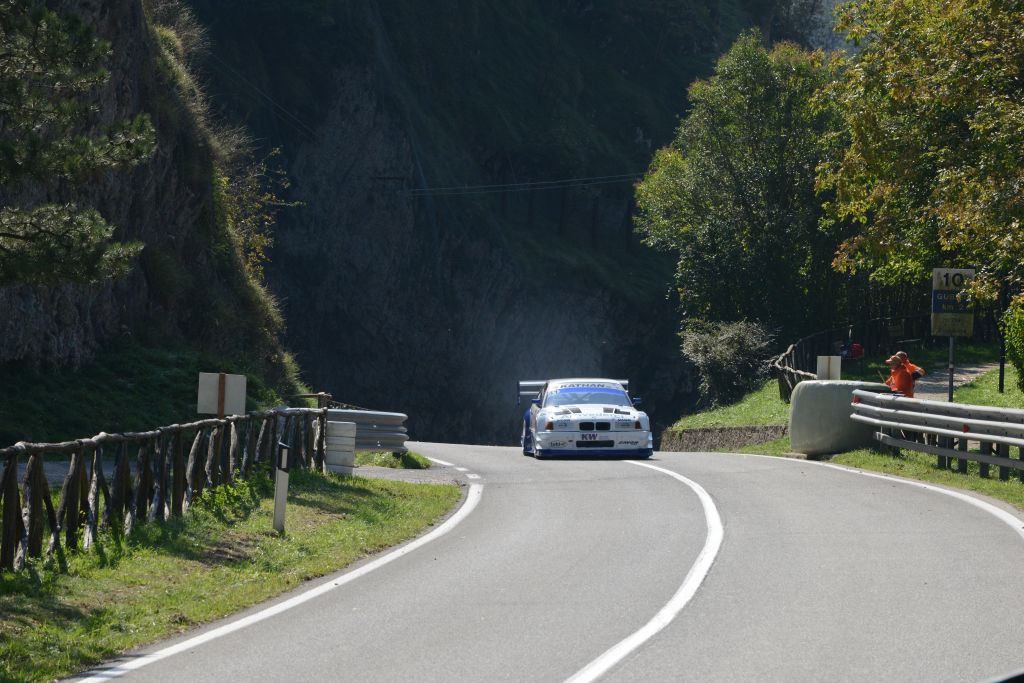 The next morning. It got serious, the first race was coming up and the tension increased to the immeasurable. The traffic light switched to green and with its unique sound, amplified by the echo of the mountains, the Judd started. Now at last, it was almost like in the past. The 320 on the mountain. In Italy. Indescribable. We were already thinking about how fast we will be today, and how Georg would watch us from above, with a grin on his face! 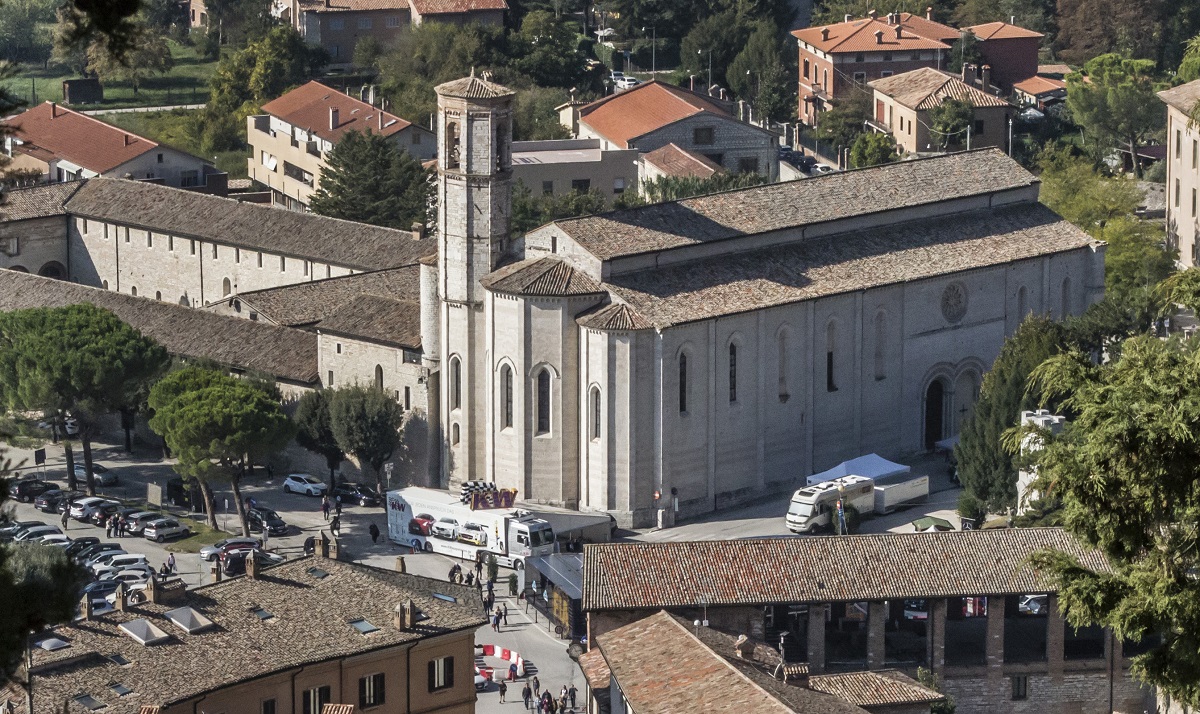 But unfortunately it did not work out so good. Jörg and the BMW tormented themselves with extreme wheelspin up the mountain. Our colleagues at the start saw sparks under the car but did not suspect anything bad. Right after Jörg turned into the first turn, our start crew saw and heard nothing anymore. They had no radio, neither did we down in the city center at the KW truck. Nobody knew what was going on. And so we had no choice but to wait. 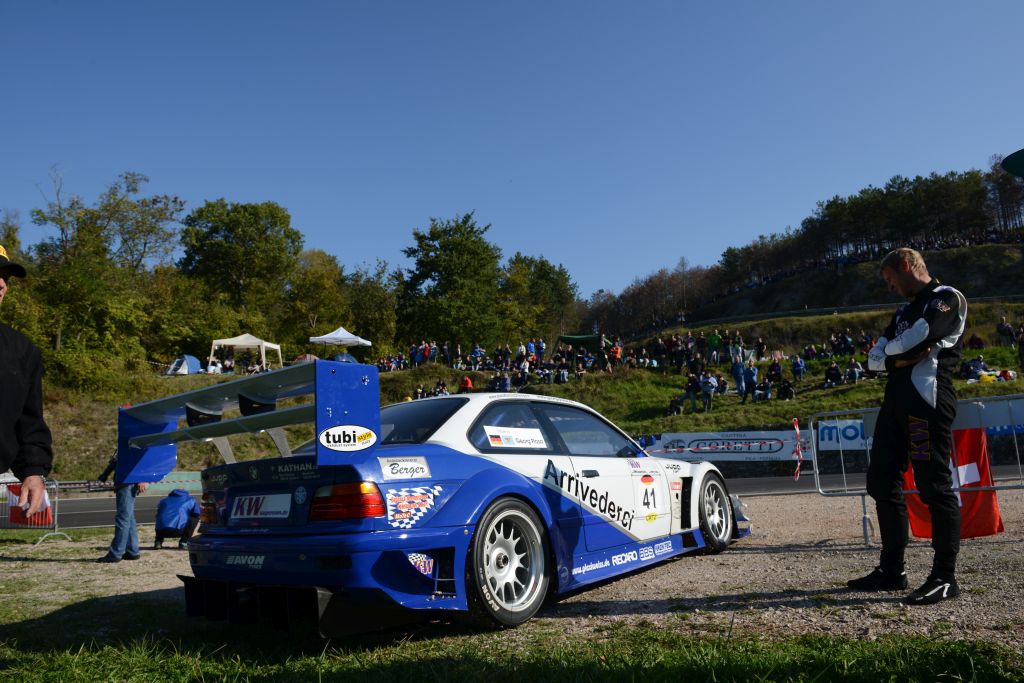 Suddenly, one of the spectators at our truck, who was following the livestream on his smartphone, shouted out the bad news; nothing works anymore and the BMW is standing still. Nothing. Failure. 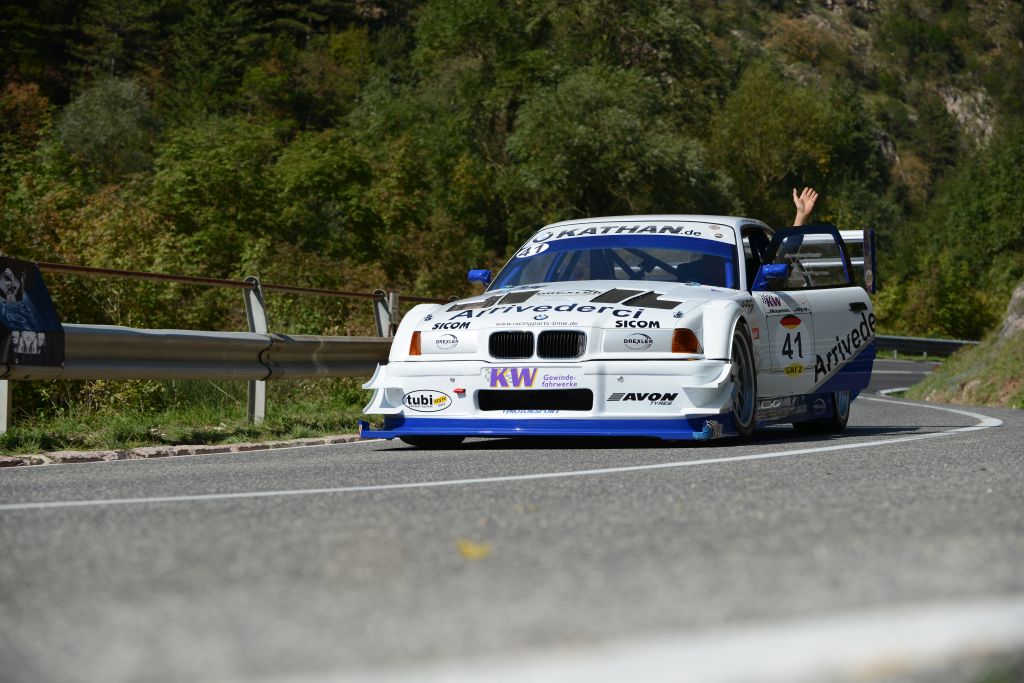 But that’s just part of the sport. A second run was planned for Sunday. After a sheer infinity, the BMW and Jörg arrived at the KW Truck in the city center, about two kilometers from the starting line. 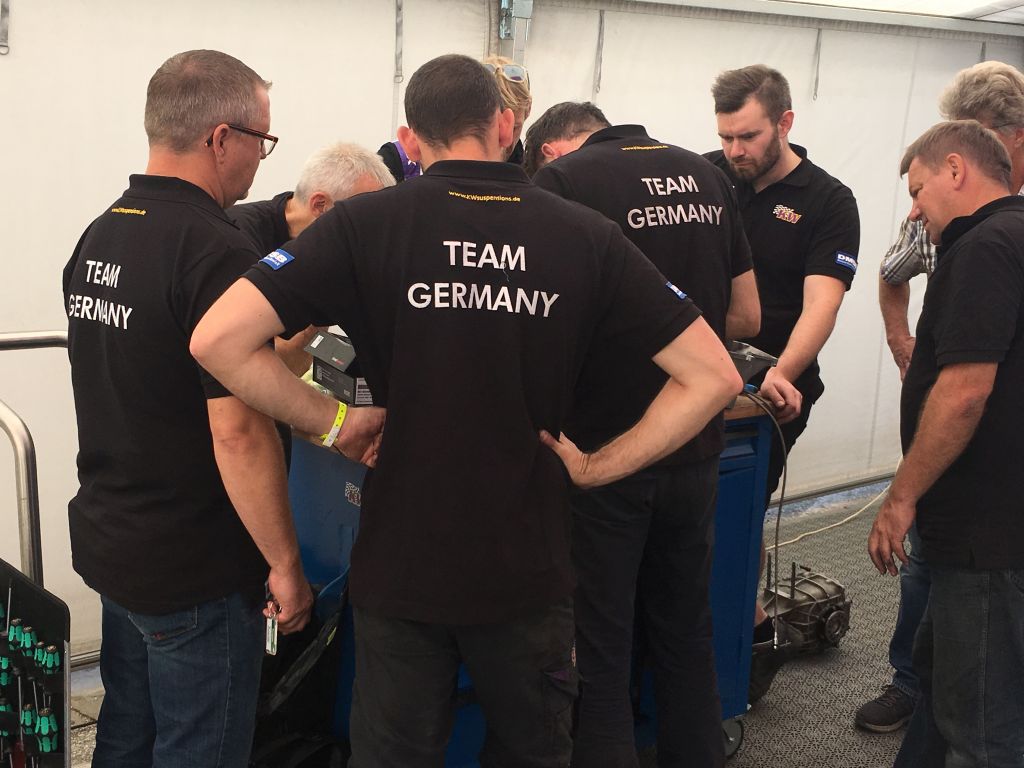 The crew disappeared into the bowels of the BMW and feverishly sought a solution to be able to “patch up” the race car in time for the second race. The faces of Andreas Weber and Martin Burmeister said it all. Nothing to do. Out. Over. No assault on the summit Too bad. But that’s motor racing. 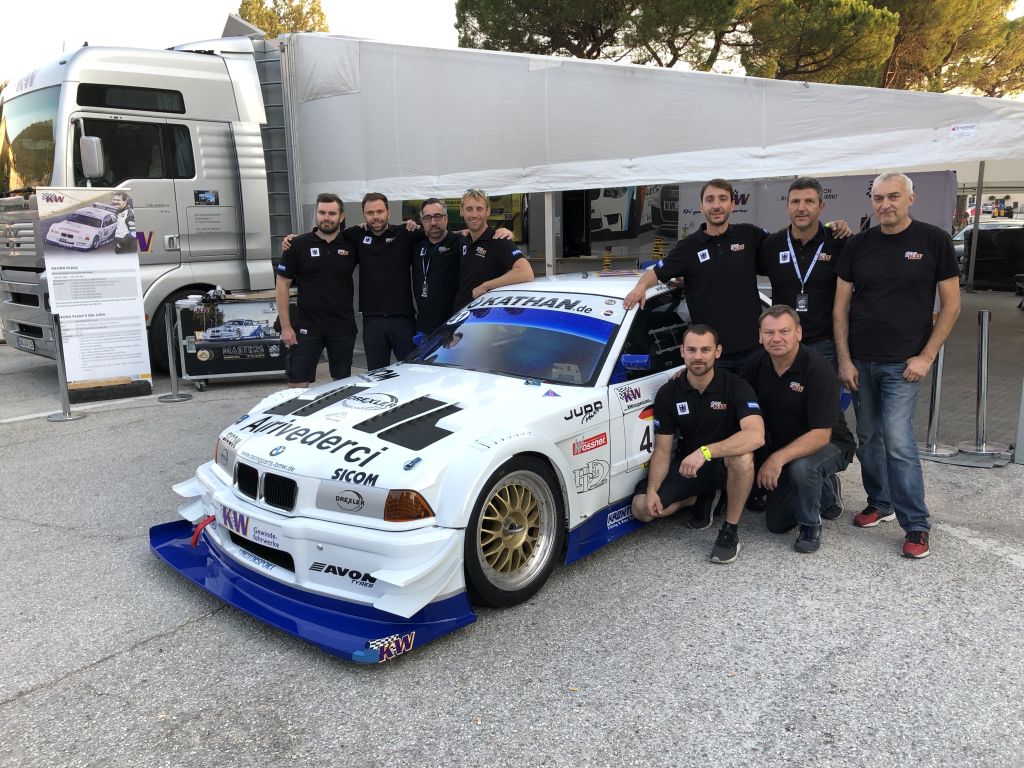 We congratulate the winners Lucio Perggini, Christian Merli, Roger Schnellmann, Will Hall and Team Luxemburg for winning the Nations Cups. Even that we unfortunately failed early in Gubbio and the disappointment was huge, we have advertised real fighting spirit.

A huge thank you to all fans and a big compliment to the organizer, we will be back. Never forget.