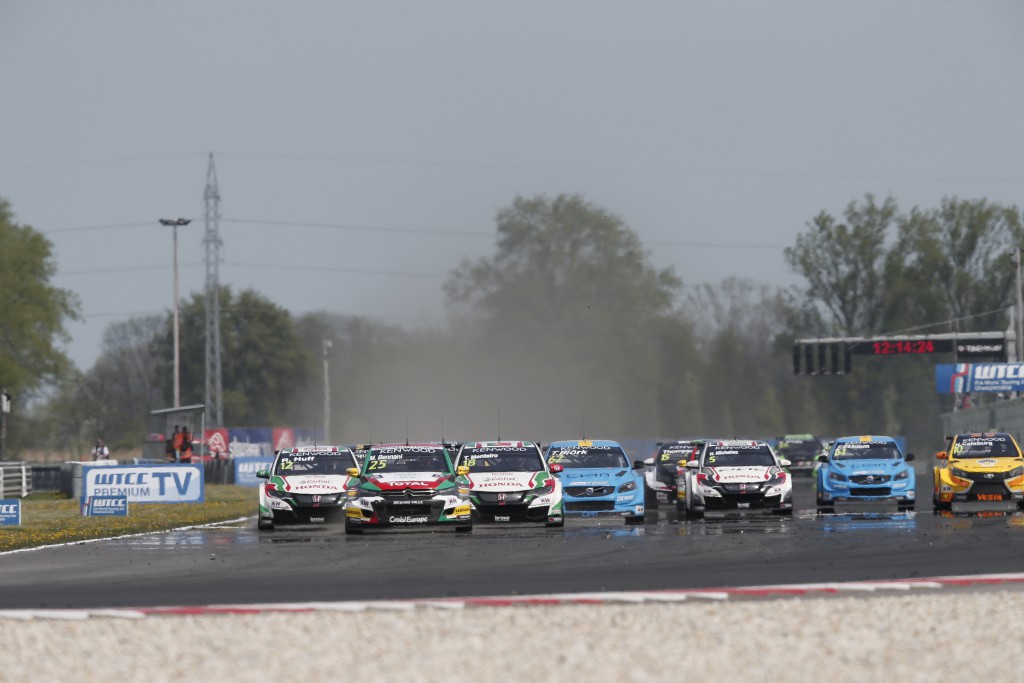 Tiago Monteiro is the new leader of the FIA World Touring Car Championship following two dramatic races at the Slovakia Ring today. Driving for the factory Honda team, Monteiro hunted down and passed Mehdi Bennani for victory two laps from home in the Opening Race with team-mate Rob Huff taking third. The Portuguese was then embroiled in a thrilling battle for honours in the Main Race, finishing 0.700s behind Argentine world champion José María López, who had nursed a mechanical problem on his Citroën from lap three. 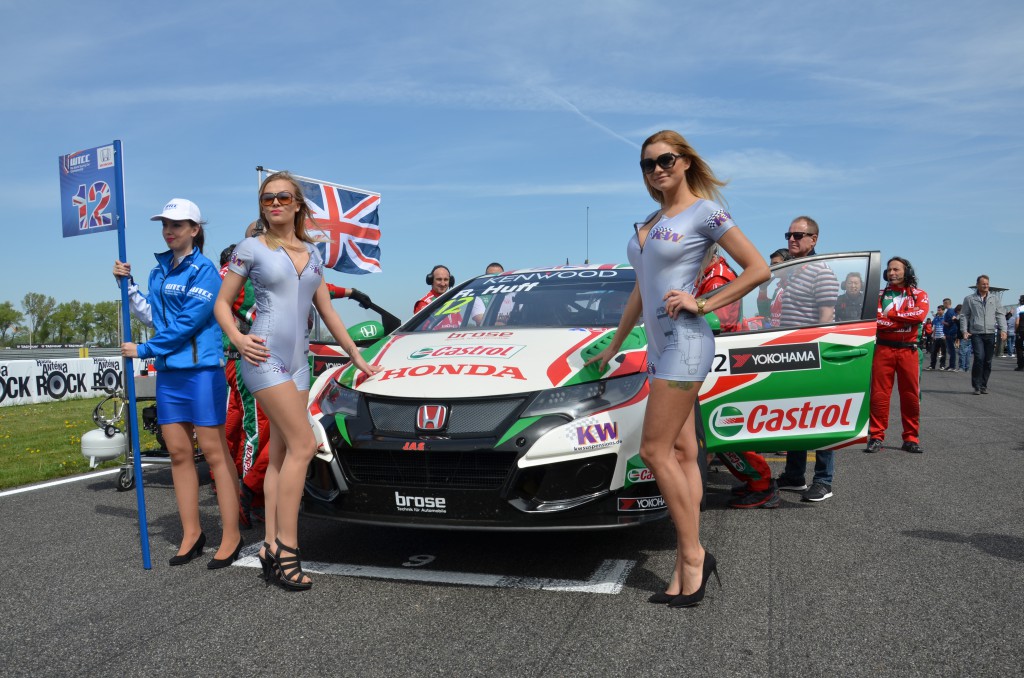 Hugo Valente started from the reverse-grid pole position for the second consecutive Opening Race, but once again was slow starting as Bennani took the lead ahead of Monteiro.

Valente meanwhile tried to fend off Rob Huff, but contact was made and the LADA driver fell down the order. From there, Monteiro and Huff pursued Bennani, who was always going to struggle with tyre wear as the race went on due to the 80 kilograms of compensation weight the Citroëns are carrying. 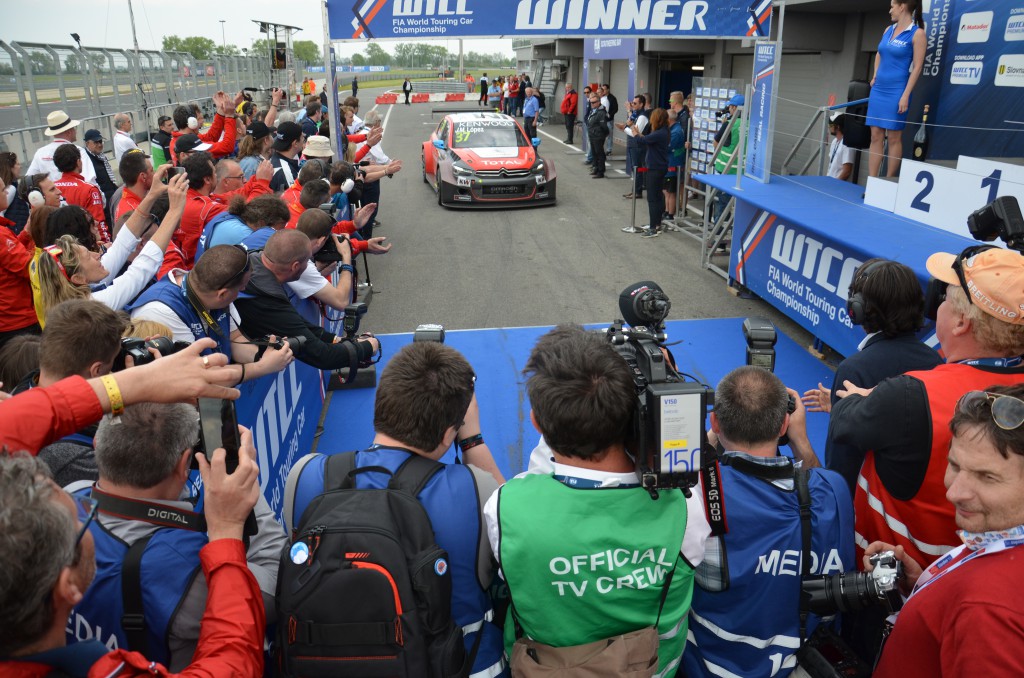 Eventually on lap 9 of 11, Monteiro found a way past at Turn 8 and opened up a margin of 2.5 seconds as he raced to the chequered flag. Huff was unable to follow his team-mate through and had to make do with third, half a second behind WTCC Trophy winner Bennani.

Gabriele Tarquini soaked up race-long attention from Citroën pair José María López and Yvan Muller to finish fourth. López lost fifth to Muller when he ran wide on lap two, but reclaimed the position with a determined move on lap seven. As López looked for a way by Tarquini on the last lap, Norbert Michelisz came around the outside of López and even challenged the reigning world champion, allowing Tarquini to escape. Thed Björk finished eighth, with his Polestar Cyan Racing team-mate Fredrik Ekblom P10 in another Volvo behind Tom Chilton. Valente ended up 12th behind fellow LADA driver Nicky Catsburg, who also found trouble on the first lap. There was a troubled end to Ferenc Ficza’s first WTCC race, his Zengő Motorsport Honda Civic catching fire in a gravel trap three laps from home. 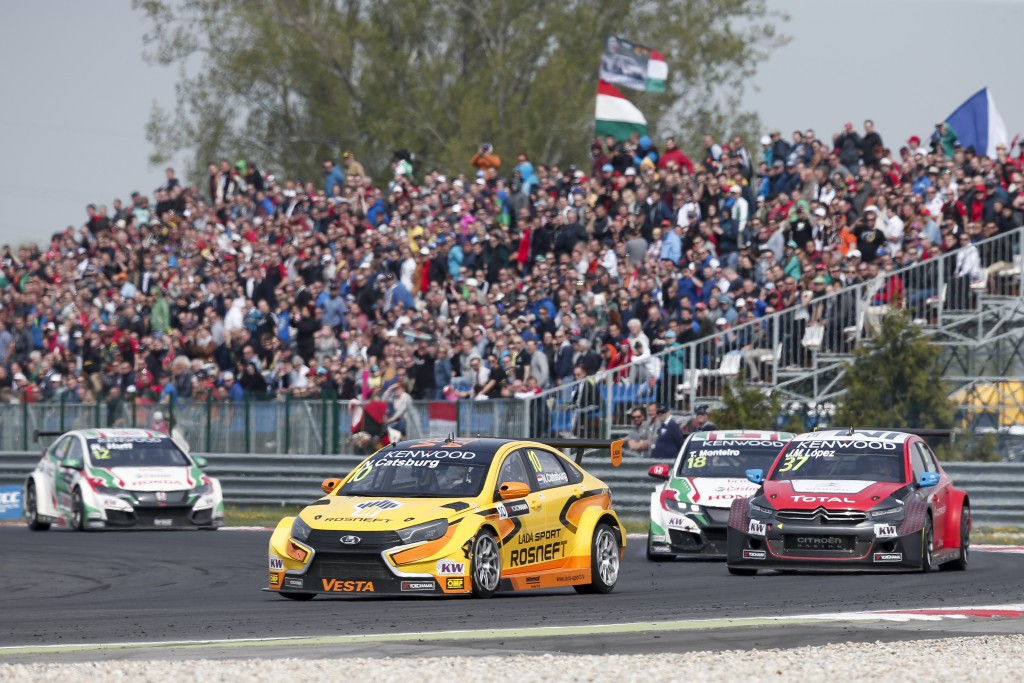 Nicky Catsburg led for seven laps but with excessive tyre wear hampering his LADA, the Dutchman slipped to third. Bennani won the WTCC Trophy twice, while Thed Björk scored the best finish so far for the Volvo S60 Polestar in fourth in the Main Race. However, the Swede was excluded from the results of both races due to the metal in the air restrictor of the engine expanding too much after the second race. 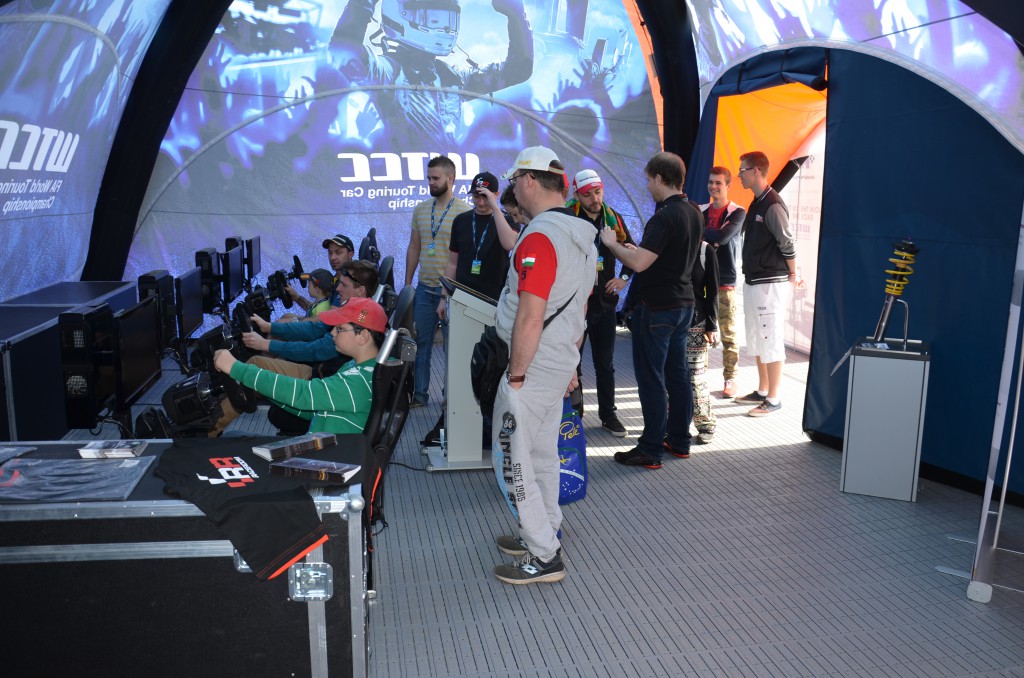 Although this did not give Björk a performance advantage during the races, WTCC regulations state that the air restrictor must pass the technical inspection no matter the temperature or situation.

José María López repassed Nicky Catsburg with one lap remaining to win an enthralling Main Race. López had shot from third to first at the start, demoting Catsburg and Citroën team-mate Yvan Muller, who was then relegated to third by Catsburg at Turn 2 after contact at the first corner. After initially building a lead, López then began to struggle with a problem on his car, and Catsburg took top spot away from him out of Turn 1 on lap four. 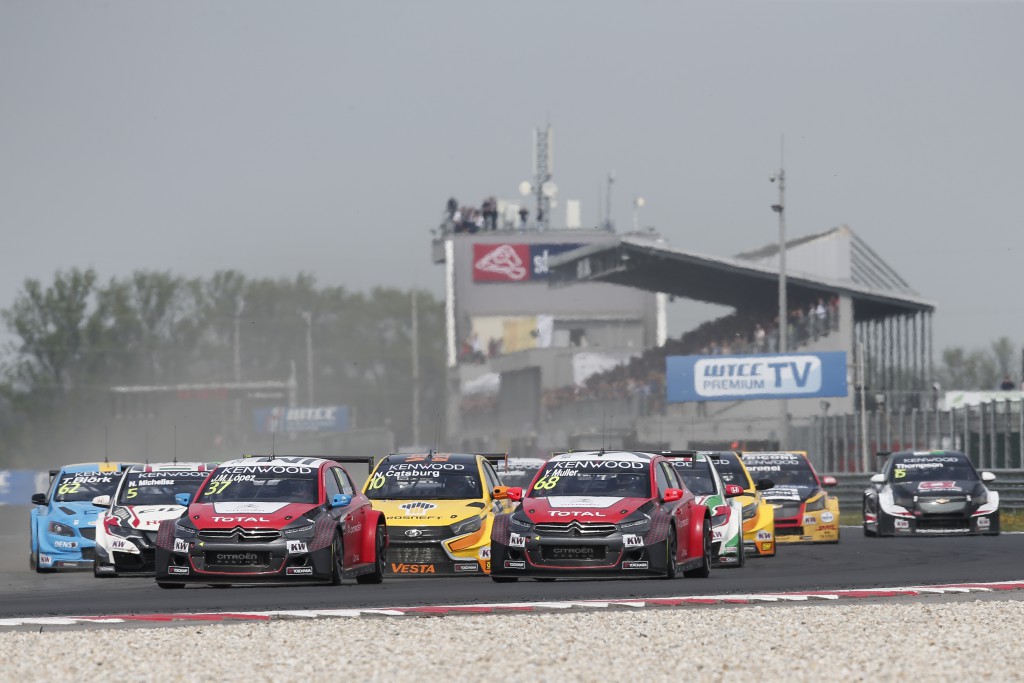 Having only missed out on the fastest time in qualifying by four hundredths of a second, Catsburg was on course to take the first WTCC win for the LADA Vesta but came under attack from López again on the penultimate lap. López got inside Catsburg at the long right-hander at the end of the lap and was 0.02 seconds ahead at the start of the final lap, making the lead his for good at Turn 1. Catsburg also fell behind Tiago Monteiro, who followed up his Opening Race victory with a second place. Norbert Michelisz challenged Catsburg’s third place but lost out to Thed Björk, who scored the best result yet for the Volvo S60 Polestar TC1 in fourth, as a puncture slowed Hungarian Michelisz.

Muller finished sixth after falling back due to contact with Rob Huff, whose race ended in a gravel trap with two laps to go with a puncture. Mehdi Bennani beat his team-mate Tom Chilton to another WTCC Trophy win in seventh, with Fredrik Ekblom ninth and Tom Coronel completing the top 10. After finishing P16 in the Opening Race, WTCC returnee James took P12 in the Main Race for ALL-INKL.COM Münnich Motorsport. 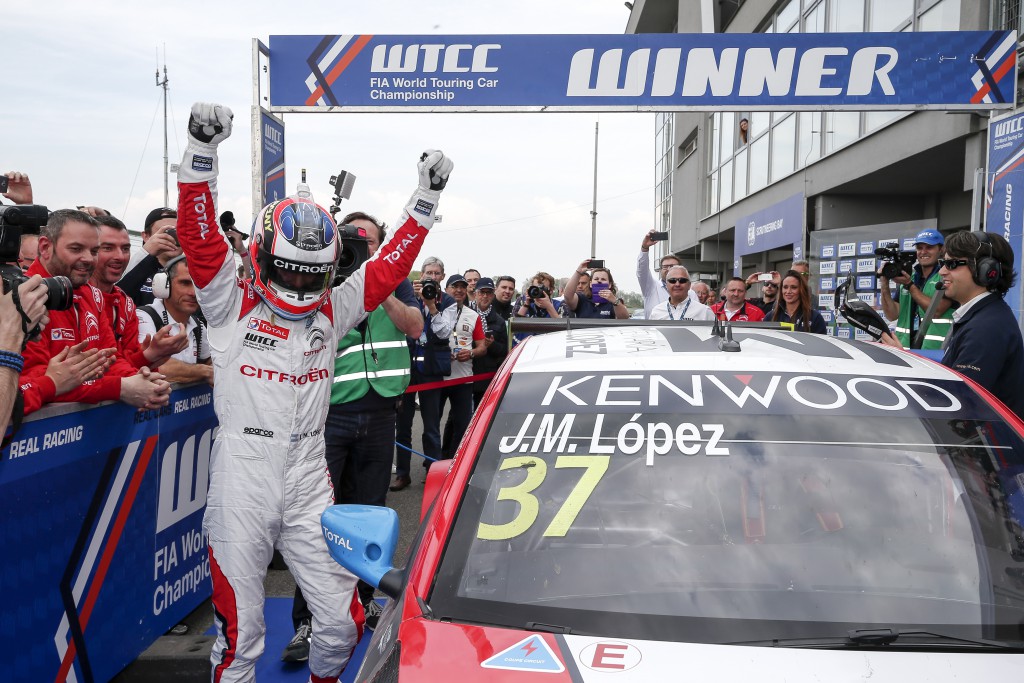 “Everything was going normal then it was lap three in Turn 9, a big vibration, a noise of metal started to come from the left-rear. At that point, immediately I said on the radio something’s broken, it’s over. In the straight the noise was gone and then it came back in the last corner and I had the LADA next to me, and again a big noise. We went onto the straight and he passed me. I just kept going, every single lap, every single metre, every single corner I was turning to the right, I was thinking it’s over. I tried to calm down and come back into concentration. I was asking how many laps to go, I just wanted to finish. And then I saw Nicky was suffering from the tyres and my car, taking off this little problem, it was quick, so I say ‘OK, I go for it’ and if it has to break it will break. I passed him and managed to win. It’s a gift. Just to finish the race is a gift. Winning is amazing”, José María López (Main Race winner). 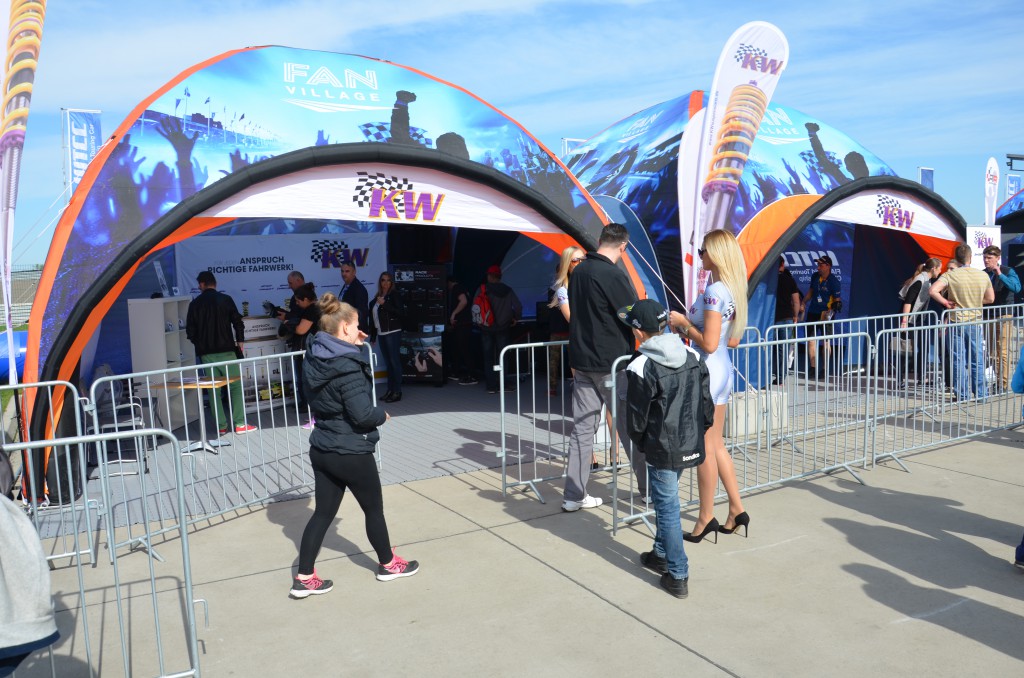 A total of 44,300 spectators visited the Slovakia Ring over the weekend, an eight per cent increase over 2015 with 36,200 present on race day.