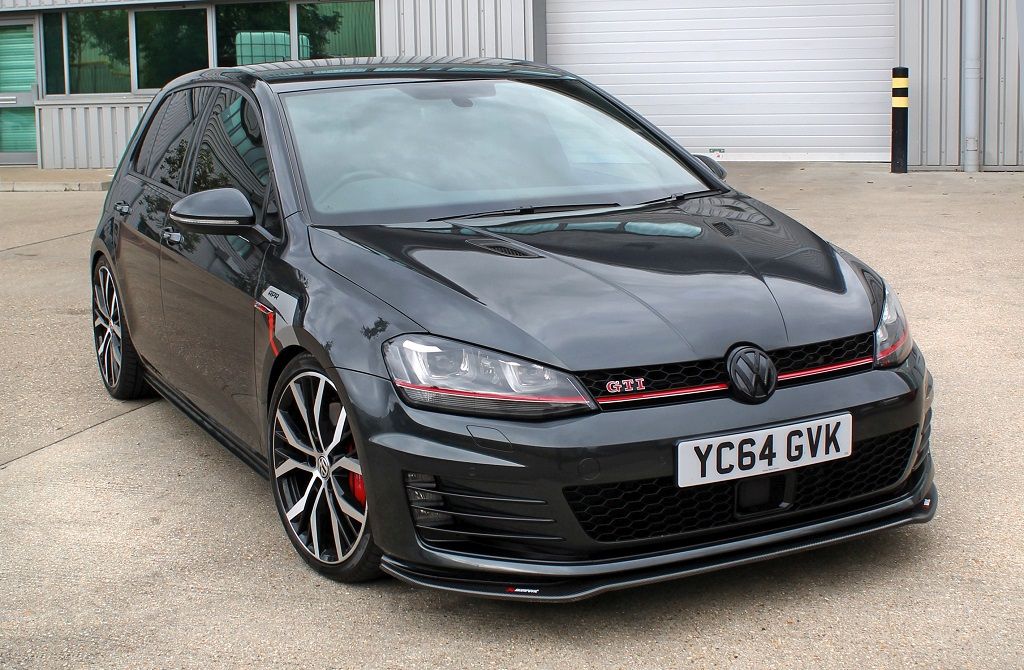 Like many VW enthusiasts, Craig Normington’s history with the marque began at an early age, with his parents having owned a Mk 2 Golf and a Mk 3 Golf which he learned to drive in. He have continued to own VWs ever since. 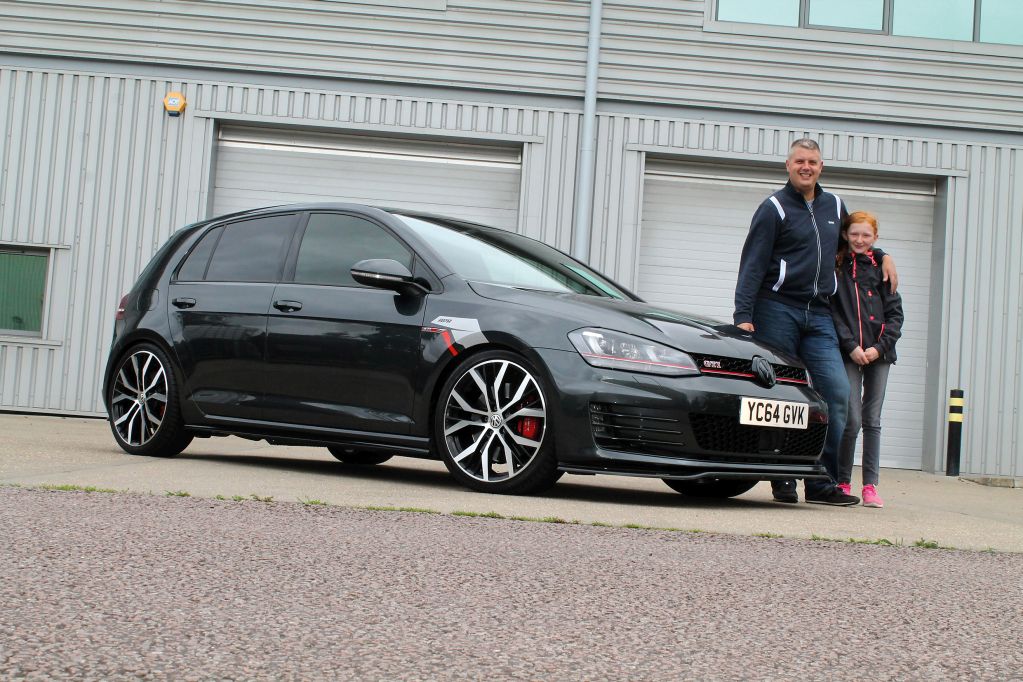 „In my opinion, being a bit ‘old school’, the flagship car for VW is for me and always will be the GTI.“ At the end of 2015, Craig bought an ex-demo Mk 7 Golf GTI with Performance pack and almost immediately began to modify it. „This time, I wanted to change the way I modified cars, something more subtle, something I could go to clients in every day, but that still had the fun factor when I wanted it. It would be bit more understated than the previous car, but still have the ability to turn heads. I wanted a car I could keep for years to come, with the reliability of a car from the factory, but the ability to give me plenty of performance and driving pleasure when I wanted it, along with the capability for a bit of track use.“ 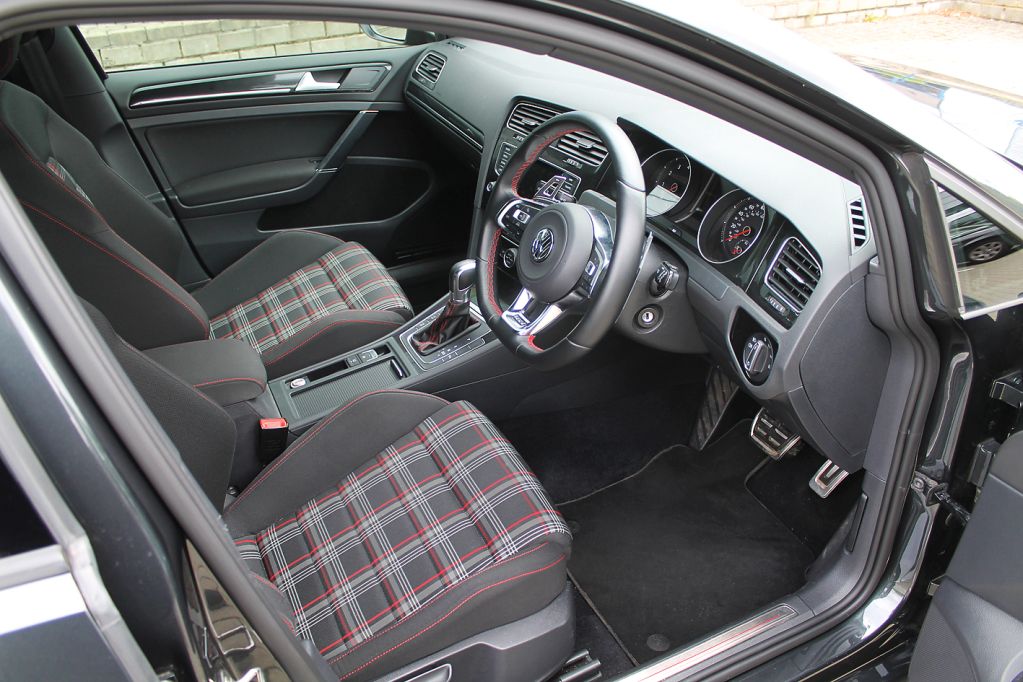 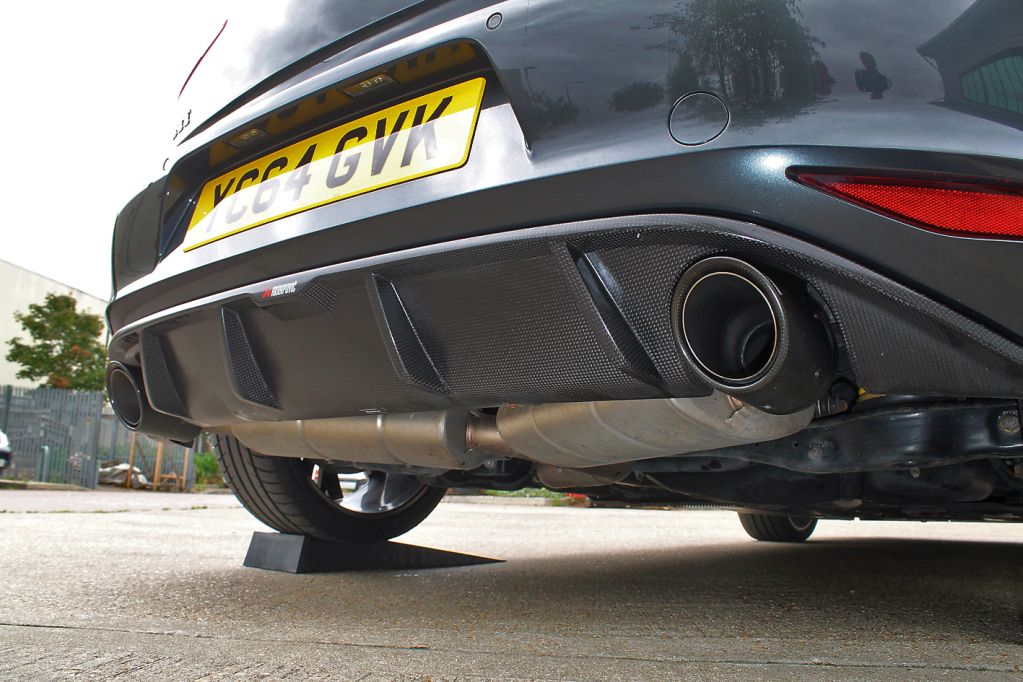 „The Akrapovic turbo-back system is far from cheap, but it is clearly very well made, fits perfectly and has the ideal characteristics. I could drive to work, without the drone at low speeds, but when you open the taps the car sounds awesome and every bit like a sports car should! As well as the exhaust system, the car also has the Akrapovic carbon-fibre rear diffuser, which looks great and adds a nice subtle touch to the styling.“ 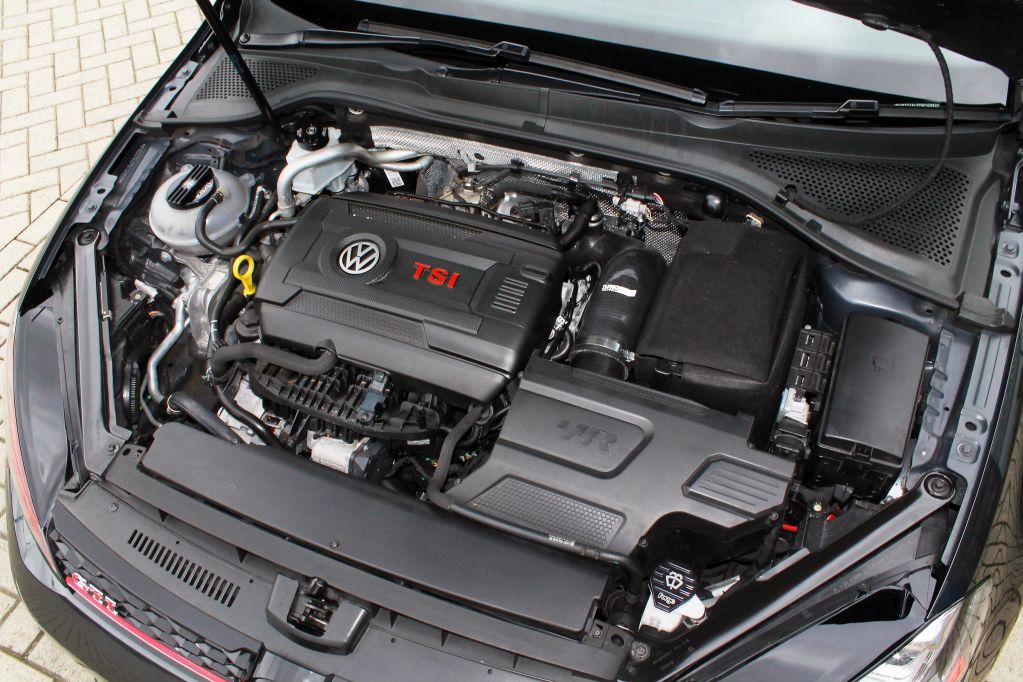 With the Golf R turbo upgrade and an APR re-map tweak pushed the bhp and torque figures above 400 and gave me the extra performance I needed. The car is now very fast indeed, but can be used every day and even though it is only front-wheel drive it is still able to put the power down cleanly, largely due to the very good electronicallycontrolled differential that comes with the Performance pack and the re-map which provides the power progressively. The DSG transmission has also had an APR re-map to complement the engine re-map, to ensure that the two work well together. 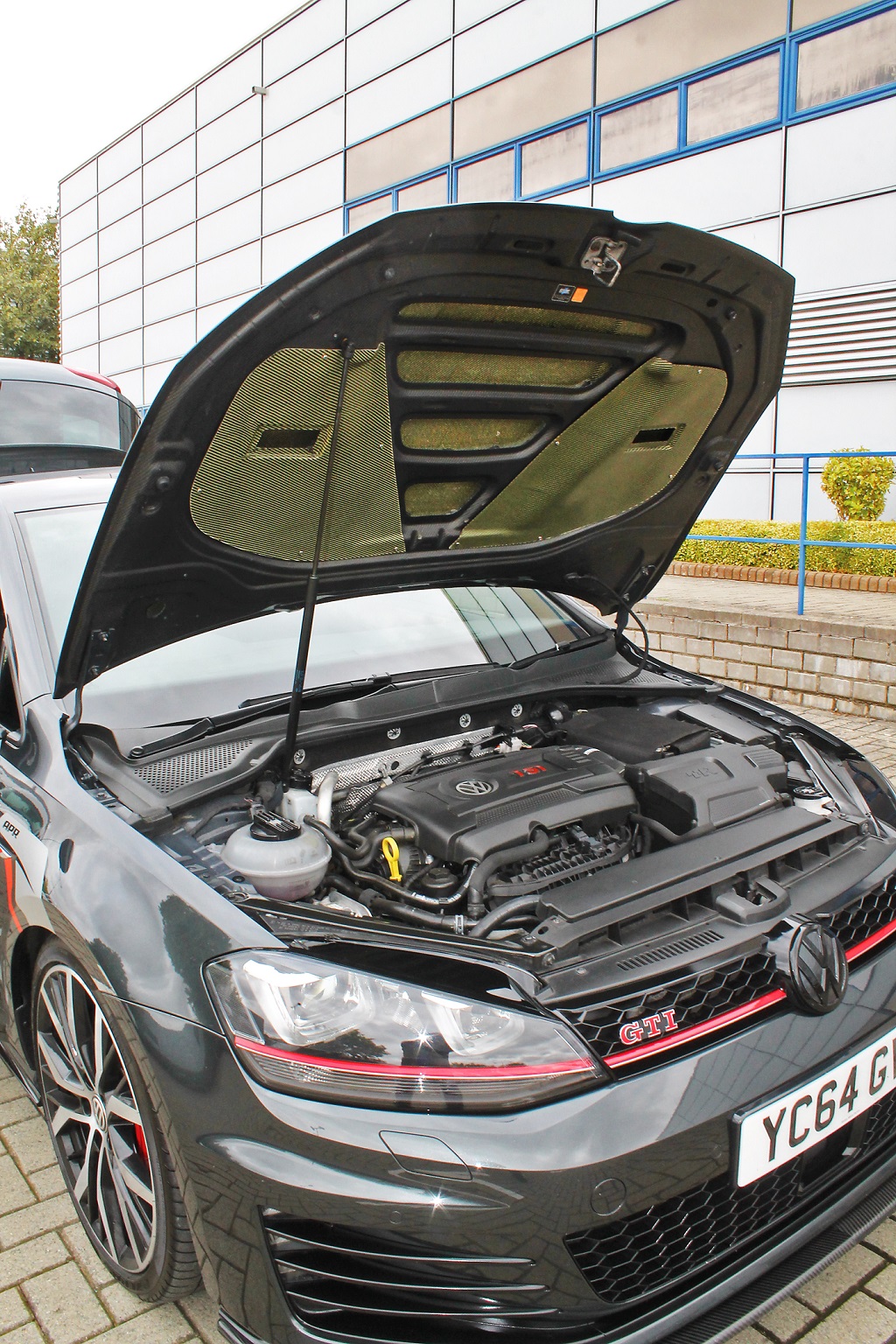 Now it was time for Craig to start improving upon the relatively tame looks of the GTI as it comes from the factory, but without becoming too overt. „I found a carbonfibre vented bonnet which I imported from Hong Kong to help with the looks, the bulge in the middle of the bonnet lifting the whole front end of the car to make it look more aggressive. It also has discreet vents to help with the cooling of the engine. 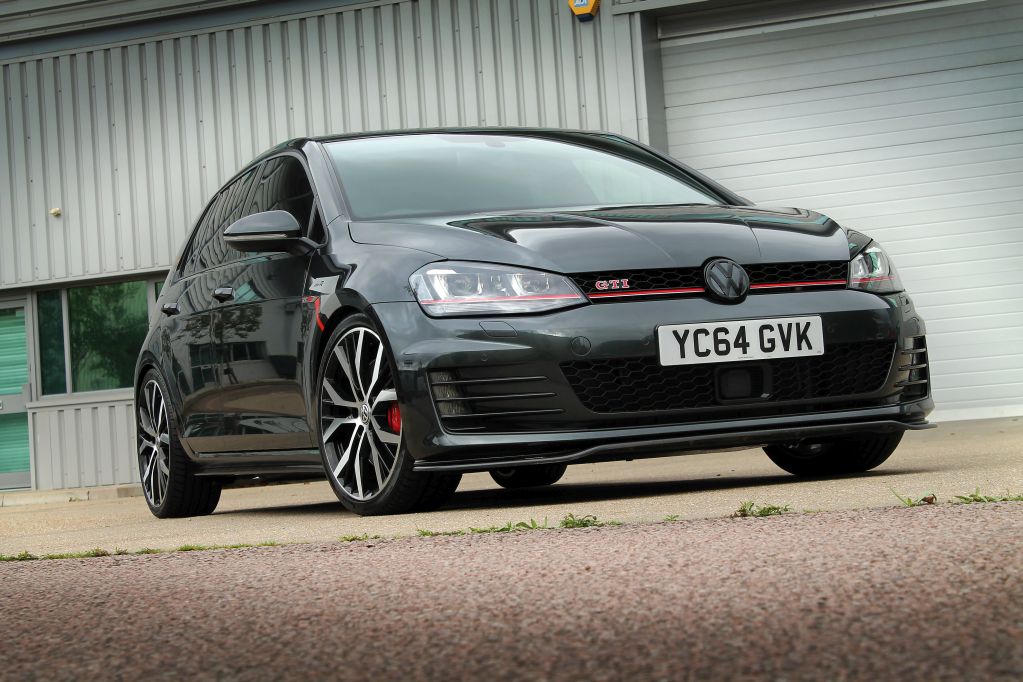 The bonnet was then painted the same colour as the car, apart from the vents, which I left as carbon-fibre, with the paintwork carried out by Craig Renton at CPR Body Repairs in Shelf, Halifax. Next came a carbon-fibre front splitter, the black plastics around the car were painted gloss black and the VW logos were painted the same colour as the car to allow the whole front end of the car to look like it was one piece. „A couple of other small modifications and the car started to look how I wanted it to. The bodywork has since had full paint correction and ceramic glass coating to all surfaces, carried out by Bespoke Detailing Solutions in Brighouse near Halifax.“ 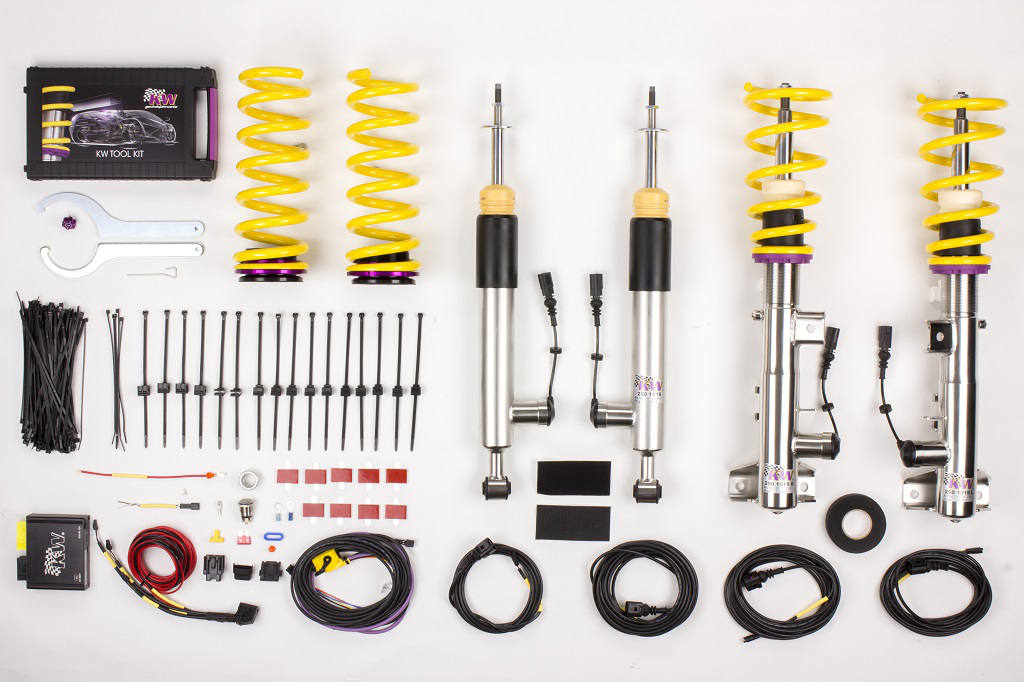 „Now that I had the extra power, I needed to upgrade the suspension to be able to cope with the additional speeds when braking and cornering. After a lot of research and seeking advice, I opted for the KW automotive DDC ECU suspension with aftermarket adaptive damping.”

“This is a height-adjustable coilover kit, but it also has electronic adjustment of the damping rates, rather like the factoryfitted DCC suspension option.” 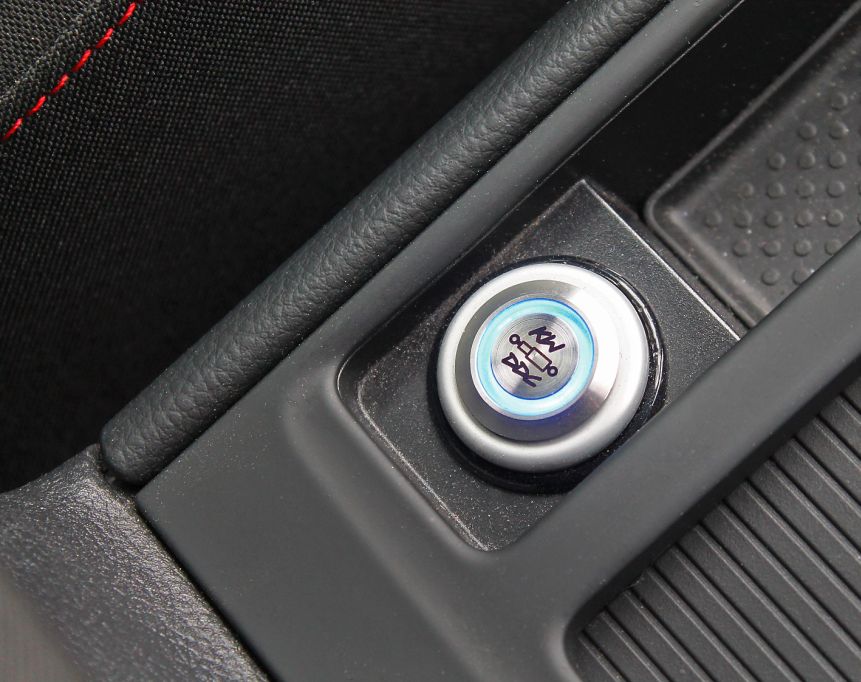 “The Comfort, Sport and Sport+ options for the damping rates give me the options and the flexibility I wanted for the car, allowing me to drive in comfort for everyday use but with the Sport and Sport+ settings selected at the touch of the button on the centre console for when I want to enjoy some dynamic driving.” 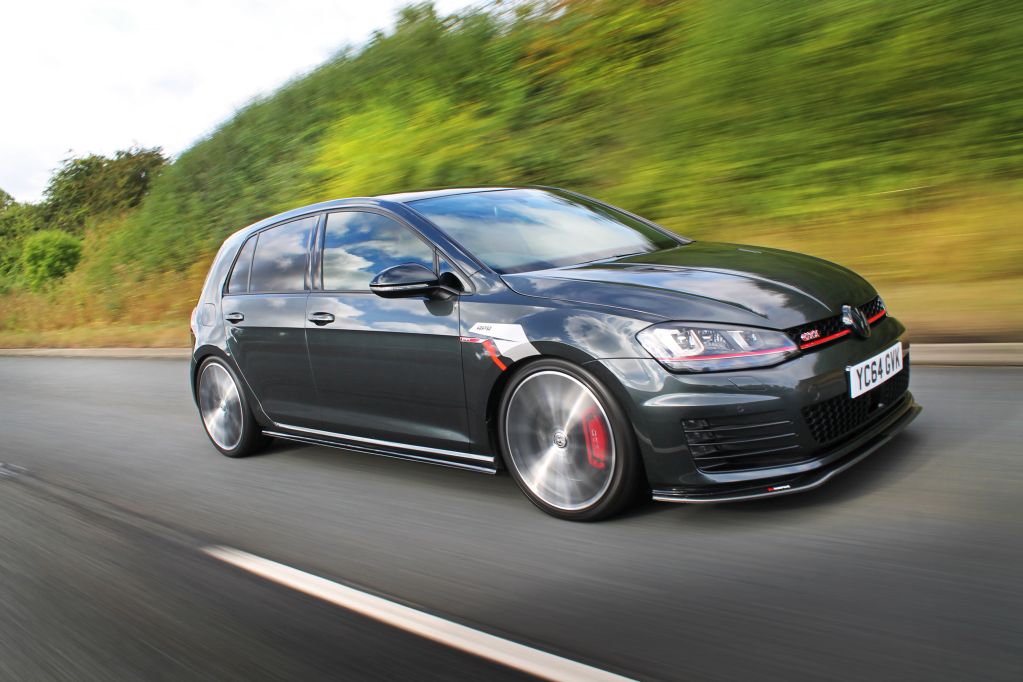 The adjustable ride height meant that I could get the car sitting exactly how I wanted it to, and now with wheel spacers fitted to push out the wheels, which were hiding under the arches as standard, the car was starting to look more complete. Retaining the standard wheels keeps the whole car looking more conservative and for the moment the original factory-fit Pirelli P-Zero tyres perform perfectly, although I suspect they won’t last quite as long as normal with all the extra power and performance to cope with!“ 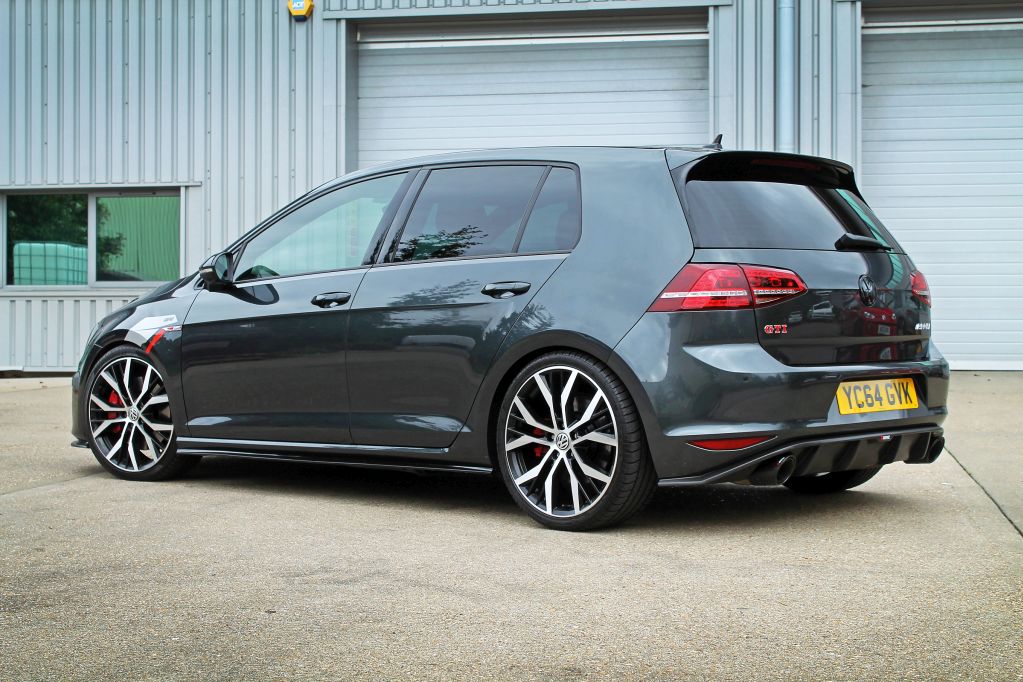 „Moving forward, there are still some bits I want to do to the car to finish it off. I have been to a few shows and meets and I thoroughly enjoyed seeing what it could do down the quarter-mile drag strip at GTI International 2016, at Shakespeare County Raceway in July. It was the first time I had ever done any quarter-mile sprinting and I loved it and will certainly be taking the car down the strip again to gain a bit more practice and get the best out of the car.“ 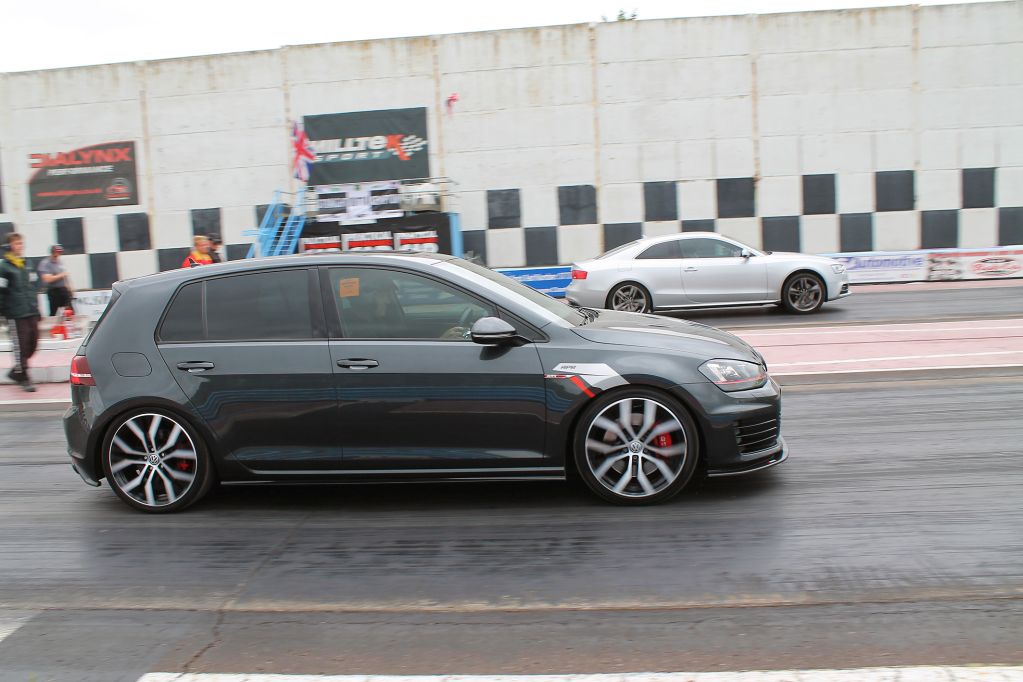 „I did half a dozen runs on the Saturday and clocked times in the range of 13.324 to 13.641 – I was the third fastest driver in the E class, not bad for a beginner, and I’m sure these times can be improved upon with a bit more experience. It also came runner-up in class 6 in the Show ’n’ Shine on the same day, which was quite a pleasant surprise. ‘Also in my plans for the future are some road trips to Europe, maybe even including the infamous Nurburgring Nordschleife, and I am looking forward to driving the GTI for many years to come.“ 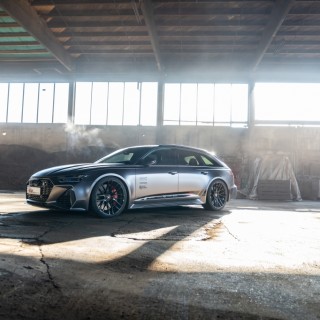 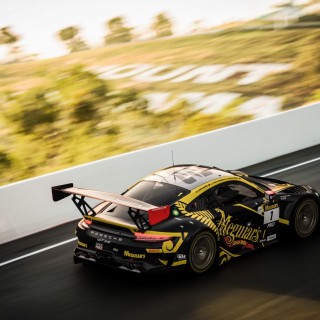