Are you still cruising or already driving? Tuning for the Ford Focus RS, appropriate for the species… 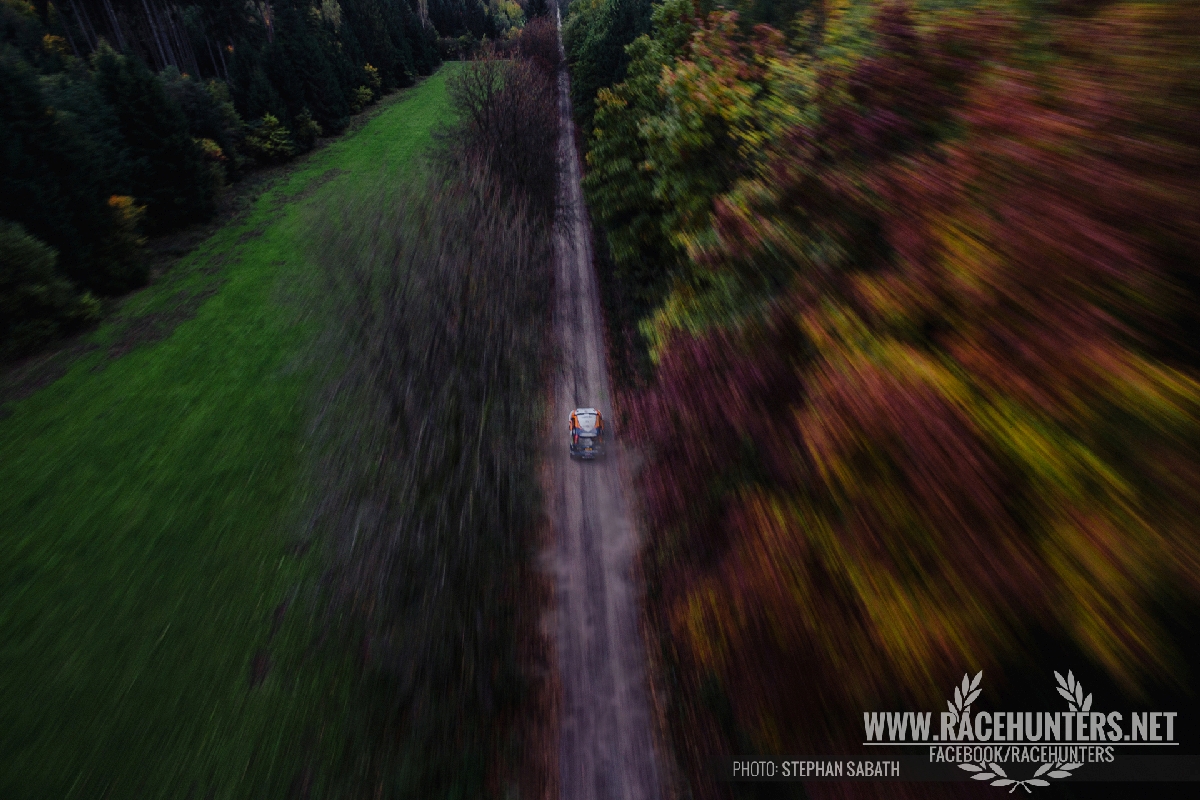 “Hangs inside.” “Three hundred fifty.” “Crest.” “Left.” “Five.” “Full.” “Bridge.” “Right.” “Minus two.” “Opens.” The pace notes a rally copilot is constantly reading from his notebook are the key to a rally teams success, without them the driver may as well be blind. But unfortunately, even the longest forest roads come to an end at some point and go back from gravel to asphalt. How boring, so we better turn around. 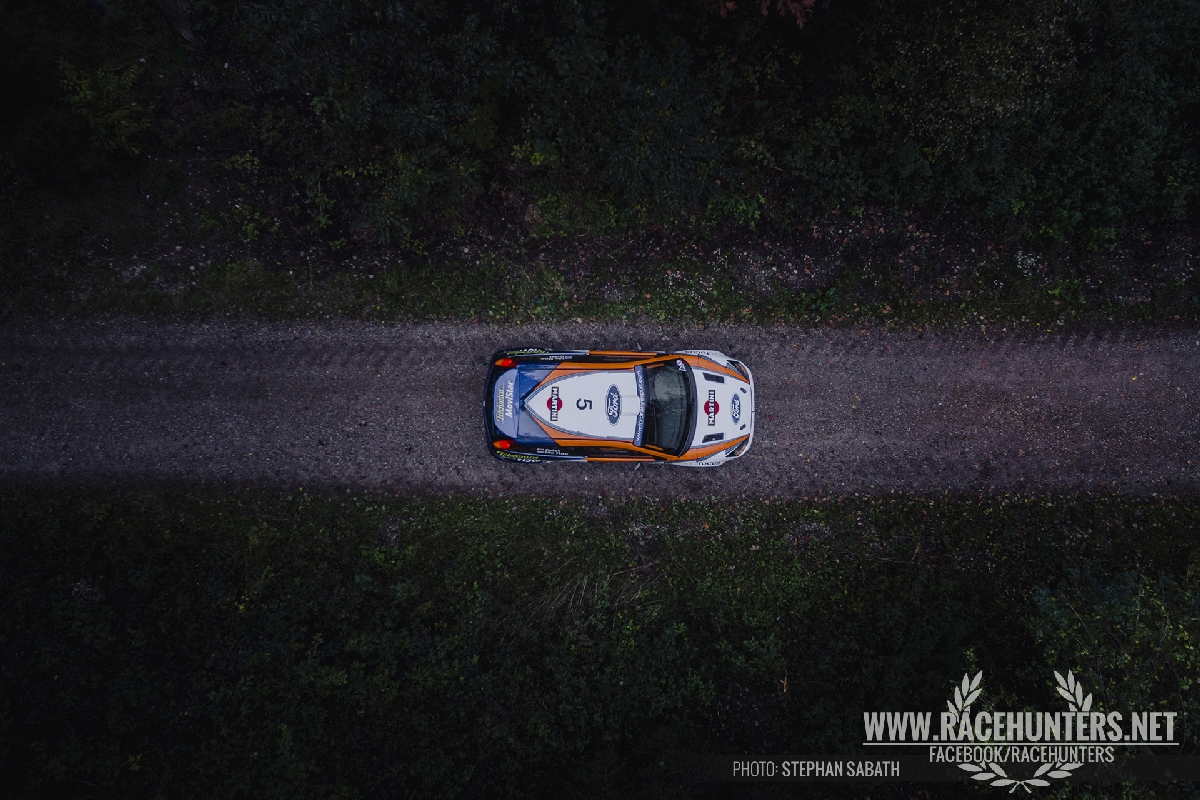 We have to take a closer look at this Focus RS. The Laptime-Performance customer, Sebastian Barth, has built up a RS as a tribute to the WRC Focus from the early millennium years as a real fun device. 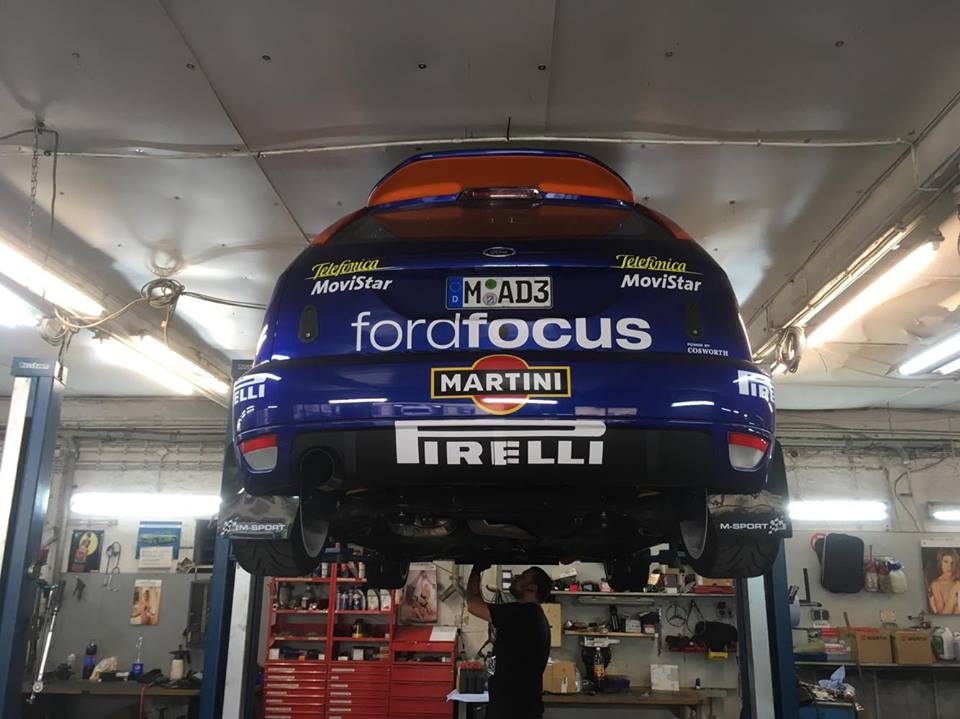 “I bought the Focus RS back then after a test drive”, Sebastian recalls. “The Ford simply had an unfiltered, old-school turbo pleasure and is extremely rare. As far as I know, only 900 cars were registered in Germany at that time and today, according to registration statistics, there are only 280 left.” Over time, the rally enthusiast from Munich (Germany) realized that even in the Focus RS, with its sport suspension and lowering springs, he does not go quite as fast around the corners so he switched to a KW coilover kit. 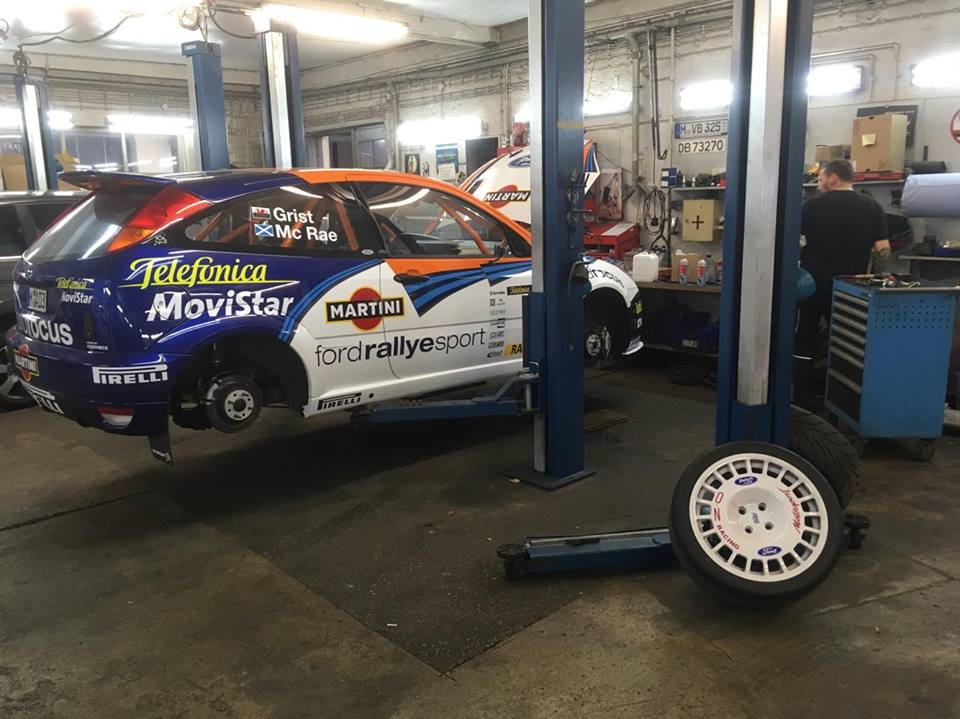 Sebastian decided to get a KW Competition racing suspension that is independently adjustable in compression and rebound damping and includes unibal top mounts on all four suspension struts. In a wise foresight, he replaced the OEM suspension weaknesses such as coupling rods, wishbones, and stabilizers with hardware from Hardrace, Mapco and Prothane. “Of course, I have installed the suspension myself, just like almost 90% of everything else”, continues the former car mechanic. “I drove to Simon from Laptime Performance to adjust the suspension on the wheel load scale and together we have adapted the racing suspension to a super balanced setup.” 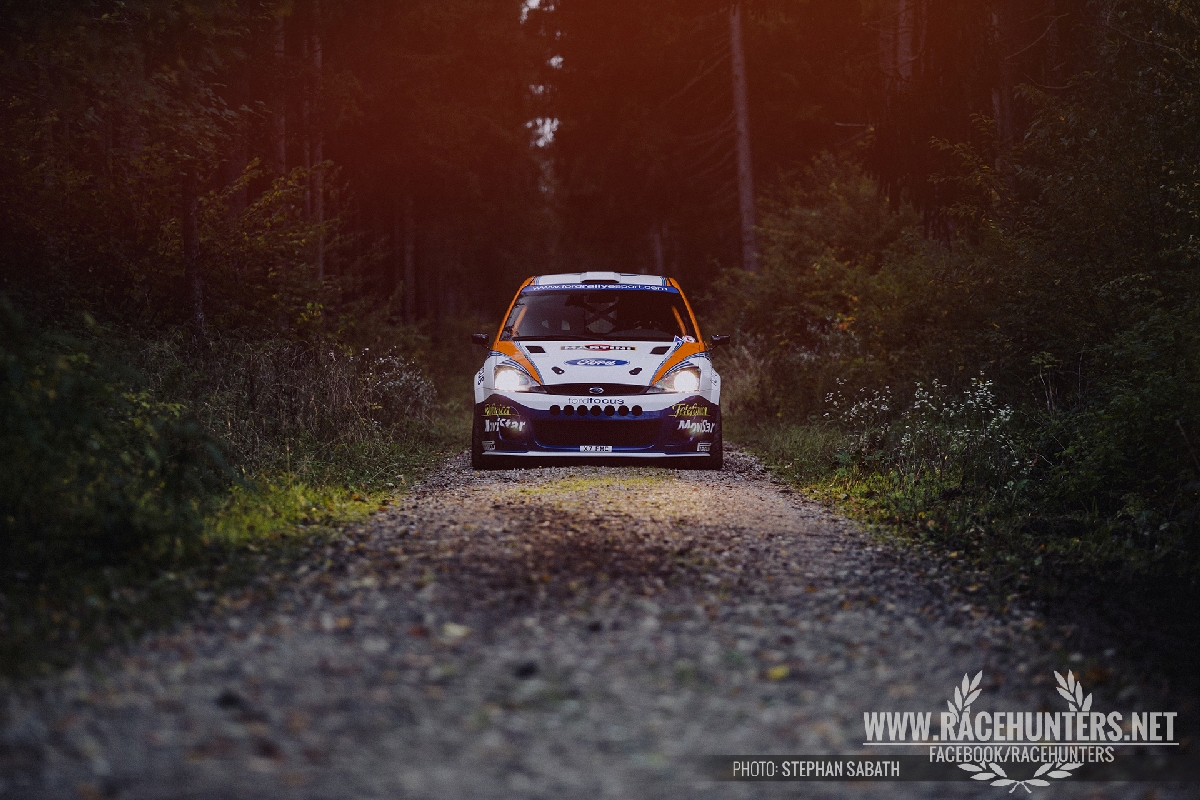 From the first Focus RS with its four-cylinder turbo engine, which was built from October 2002 to November 2003, there were only 4,501 pieces and in the compact class, the RS was simply the best performance car. Sebastian’s RS is even more unique because the car mechanic cleaned the front bumper and made some openings for oil cooler and brake ventilation. The bonnet received WRC scoops and Aerocatch quick releases. 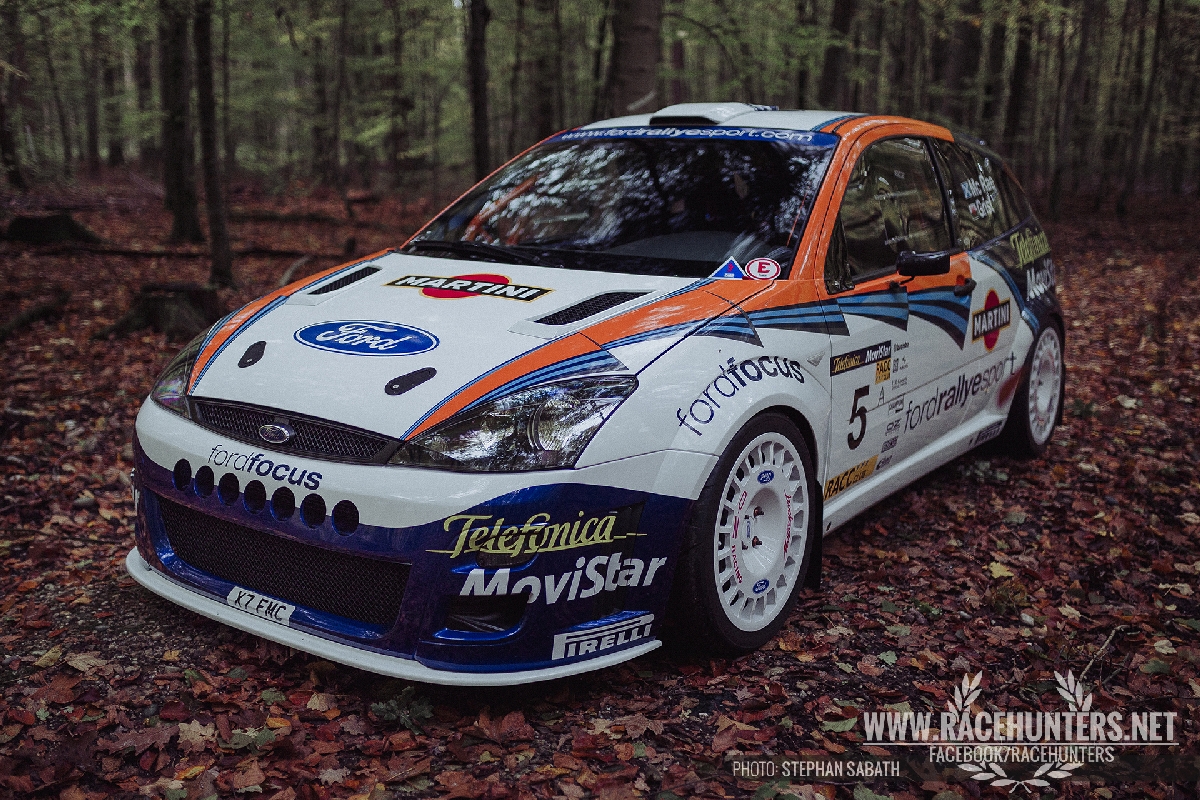 He installed black In.Pro headlights, In.Pro. indicators, Phoenix Autosport cup-lip, SPA Design mirrors made of carbon fiber was a must for a real tribute to a rally RS, also M-Sport mud flaps had to be mounted. Sebastian also found GRP fenders from Phoenix Autosport and even though they still have the standard dimensions, Sebastian gained more space for the wheels by modifying the inner wheel arches. 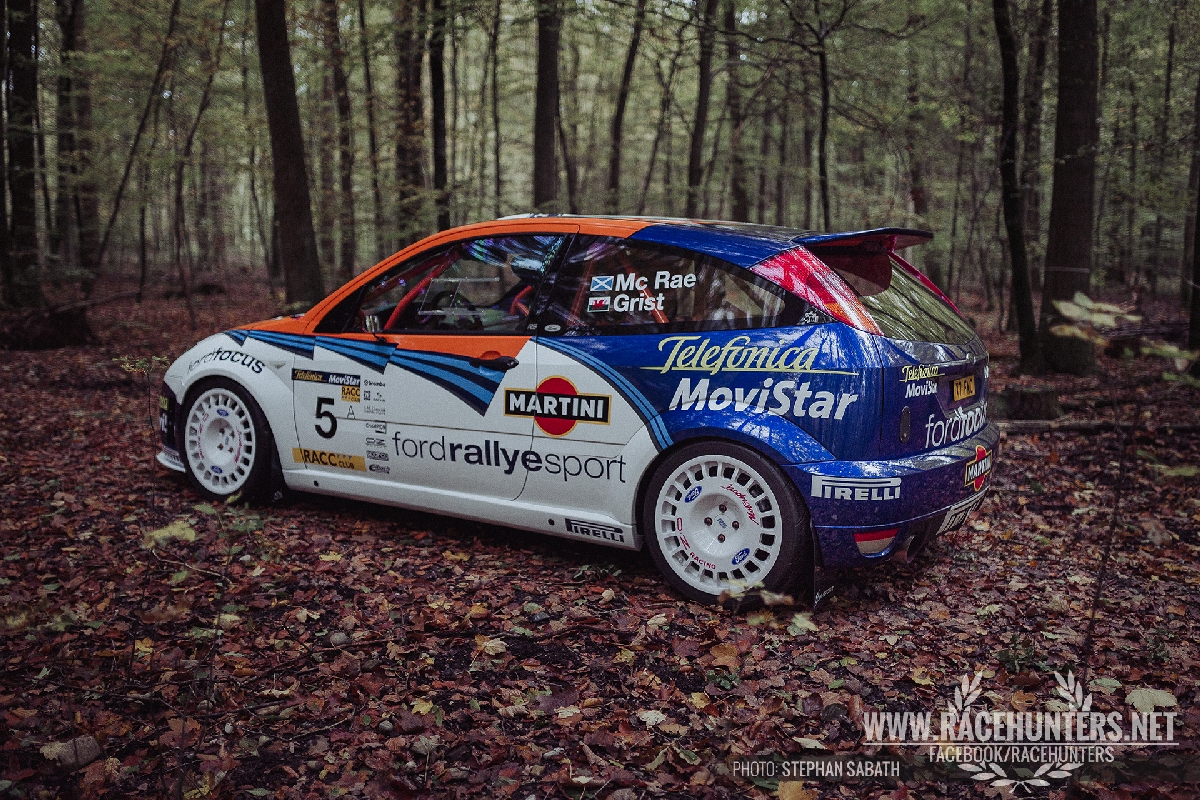 Why all this rally homage? “That’s actually very simple”, Sebastian tells us, whom we met at the Laptime Performance opening day. “I have always been a fan of Colin McRae and I have always had a passion for rally sport.” 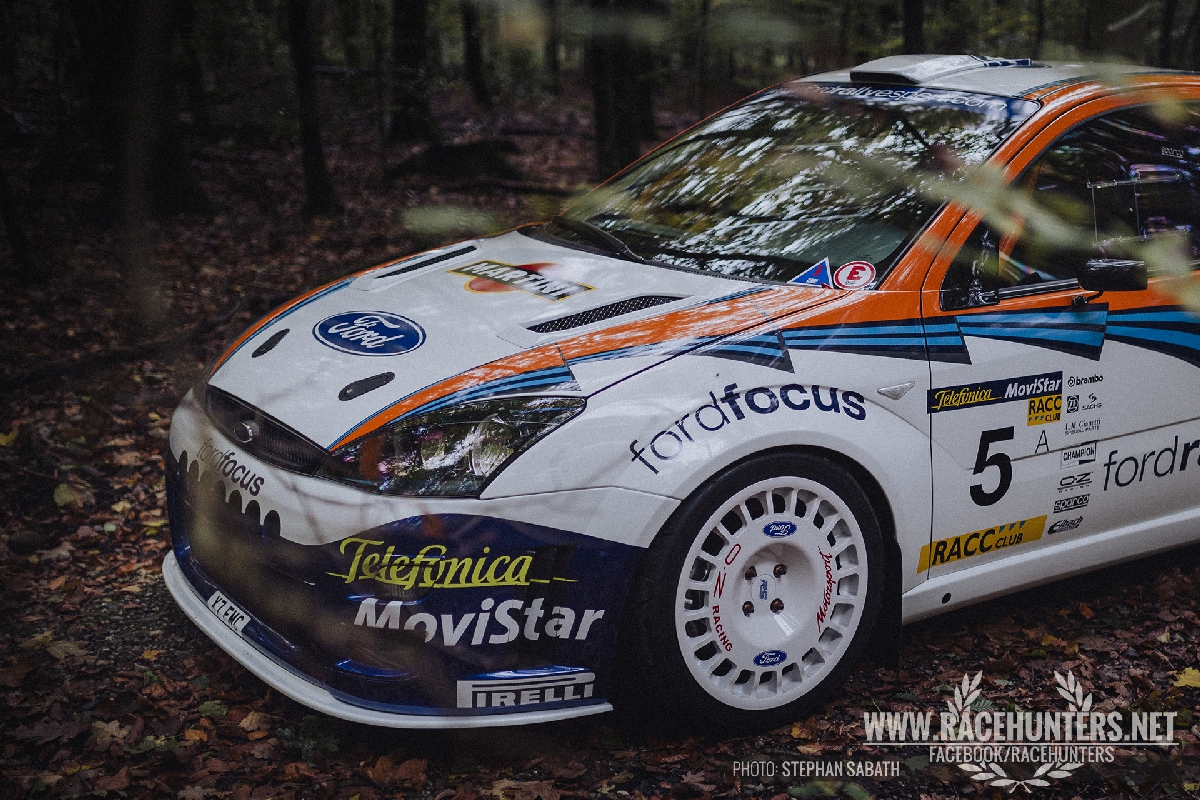 The white rims are only at the first sight OZ racing wheels. Sebastian bought 8 x 18 inch ET35 Compomotive TH1882 and put Toyo R888 Semis in 225/40 on it. The wheel studs were replaced by 82 mm long studs with open, copper-plated wheel nuts. The brake discs come from Tarox and in the front, ventilation hoses lead to the brake system with their Suhe Motorsport slots on the calipers. 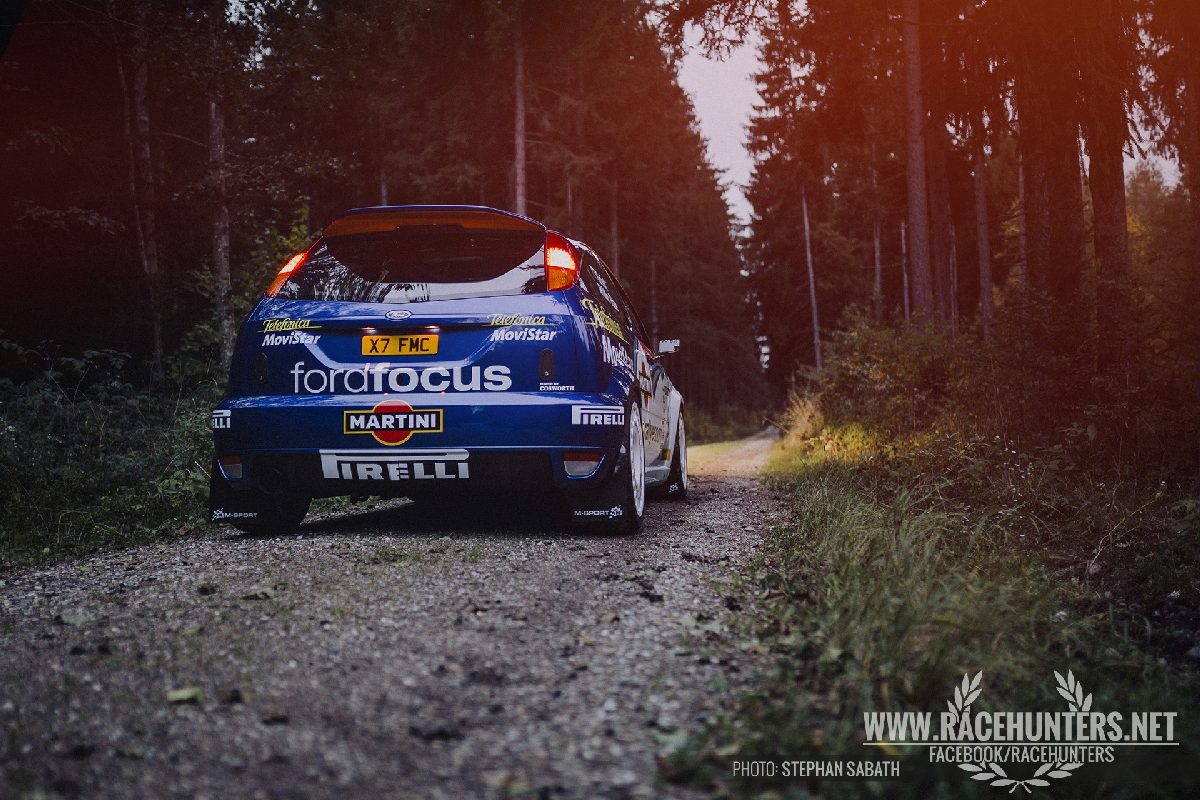 With his rally tribute the Ford fan, who is now working as an IT technician, even replaced all the windows with lightweight Macrolon windows. Sebastian removed unnecessary weight from the standard hatch and today it is a real lightweight. The WRC roof edge spoiler is from Mattig. The left reverse light comes from the UK. 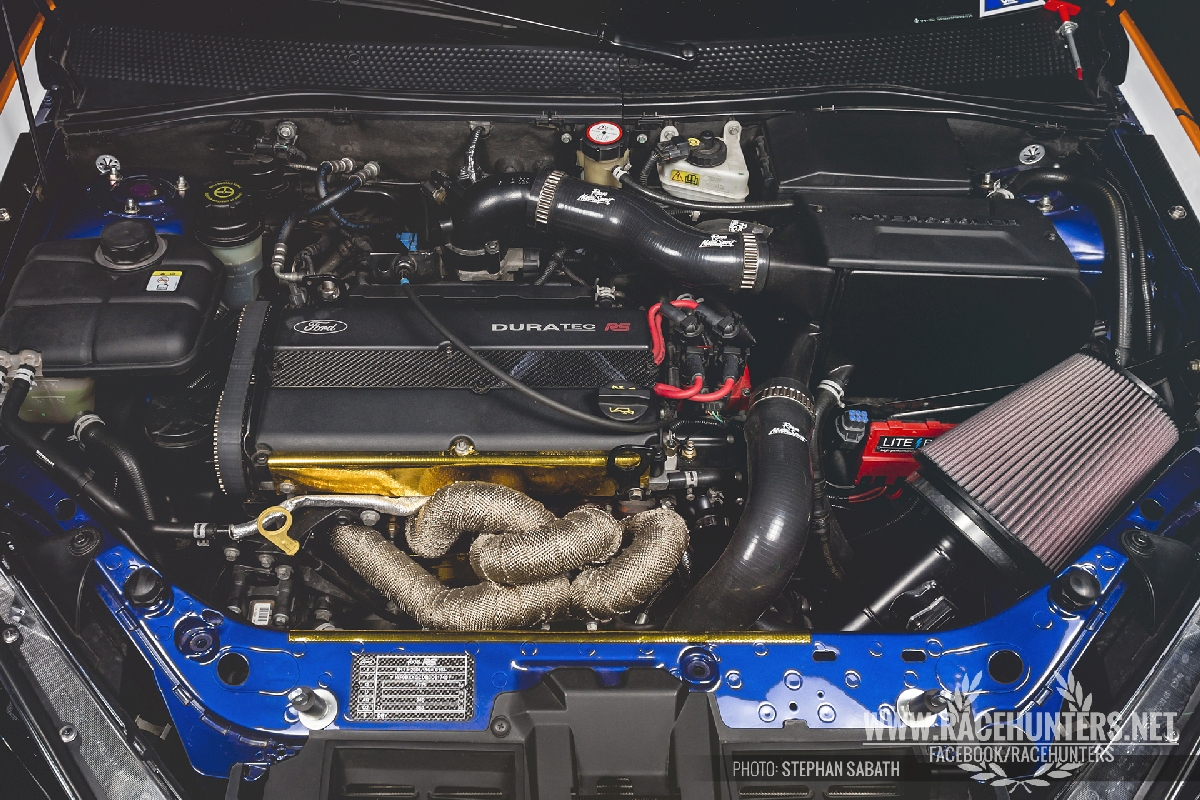 In addition to our KW Competition racing suspension, of course the four-cylinder turbo engine is the absolute highlight in the Focus. The 215 series hp are long gone. The series turbo was replaced by Sebastian with a Turbo Technics T36 charger and optimized the complete aspiration (RS500 intake …) and cooling circles. Of course, the engine compartment optics didn´t come up too short, just like the entire power yield. 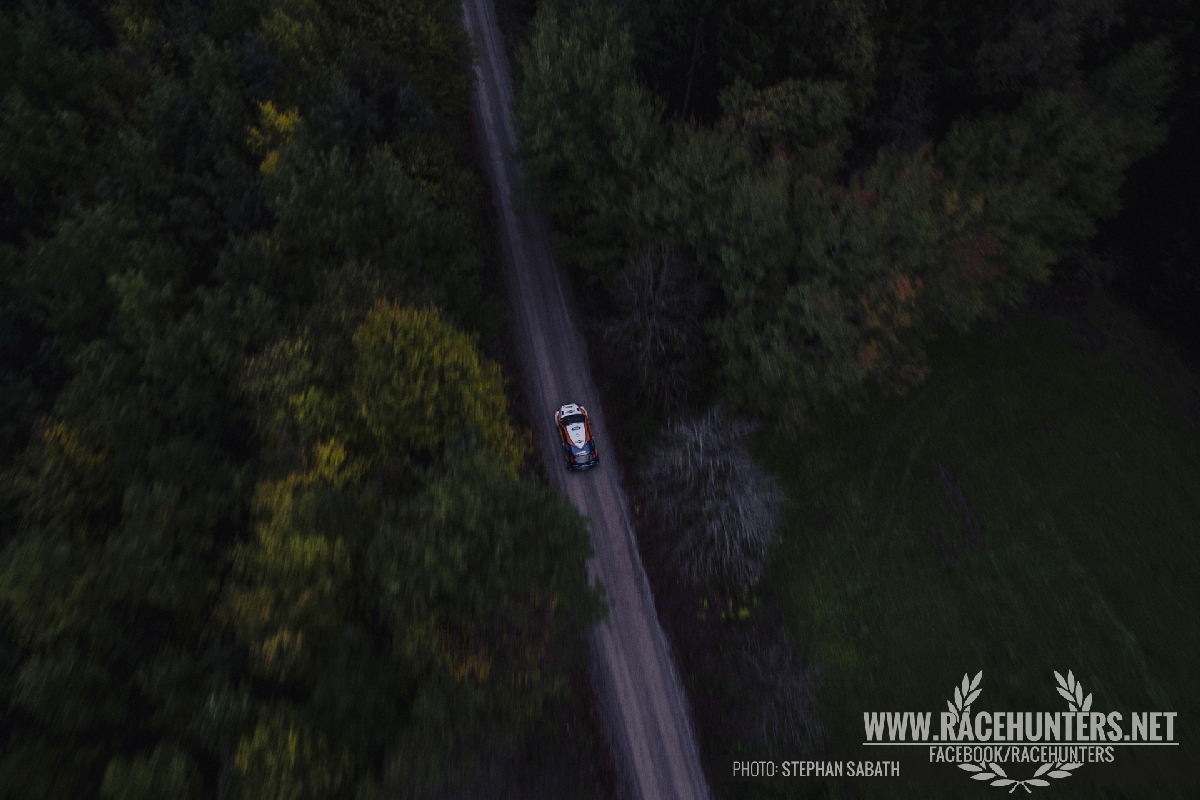 “Depending on the boost pressure, I either have 300 hp and 377 Nm at 6440 rpm or 396 hp and 475 Nm at 6700 rpm”, smiles Sebastian. The boost pressure is switched by a Sabre Stage 2 boost pressure regulator. A Sabre Stage 3 live mapping takes over the engine control. But until he got there, he also learned it the hard way. To make the Focus even more fun, the electronics have been reduced as far as possible except for the anti-lock brake system. 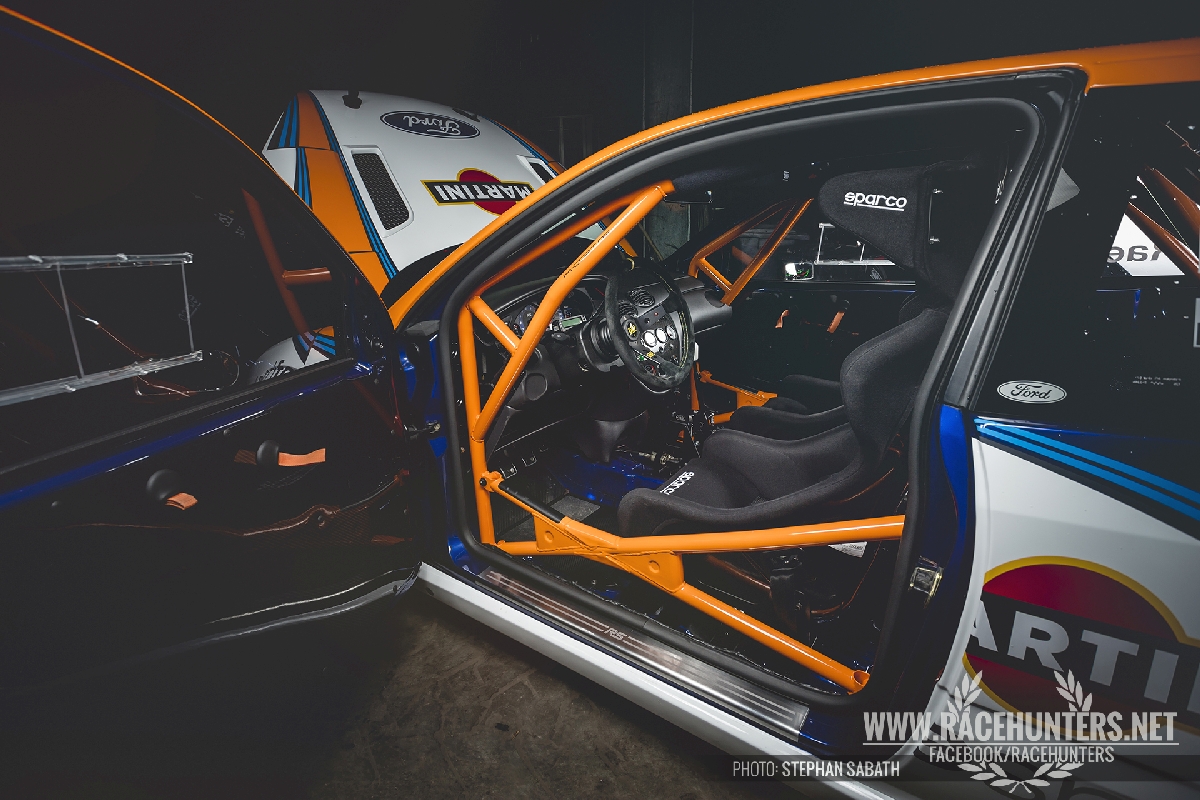 Everything you don´t need for sporty driving, was thrown out by Sebastian. Instead, a bolt-in safety cell from M-Coat and Sparco bucket seats on Recaro seat sliders move it. Of course, besides raw sheet metal, there is a lot of carbon fiber paneling and a little comfort with cage upholstery and a helmet box. 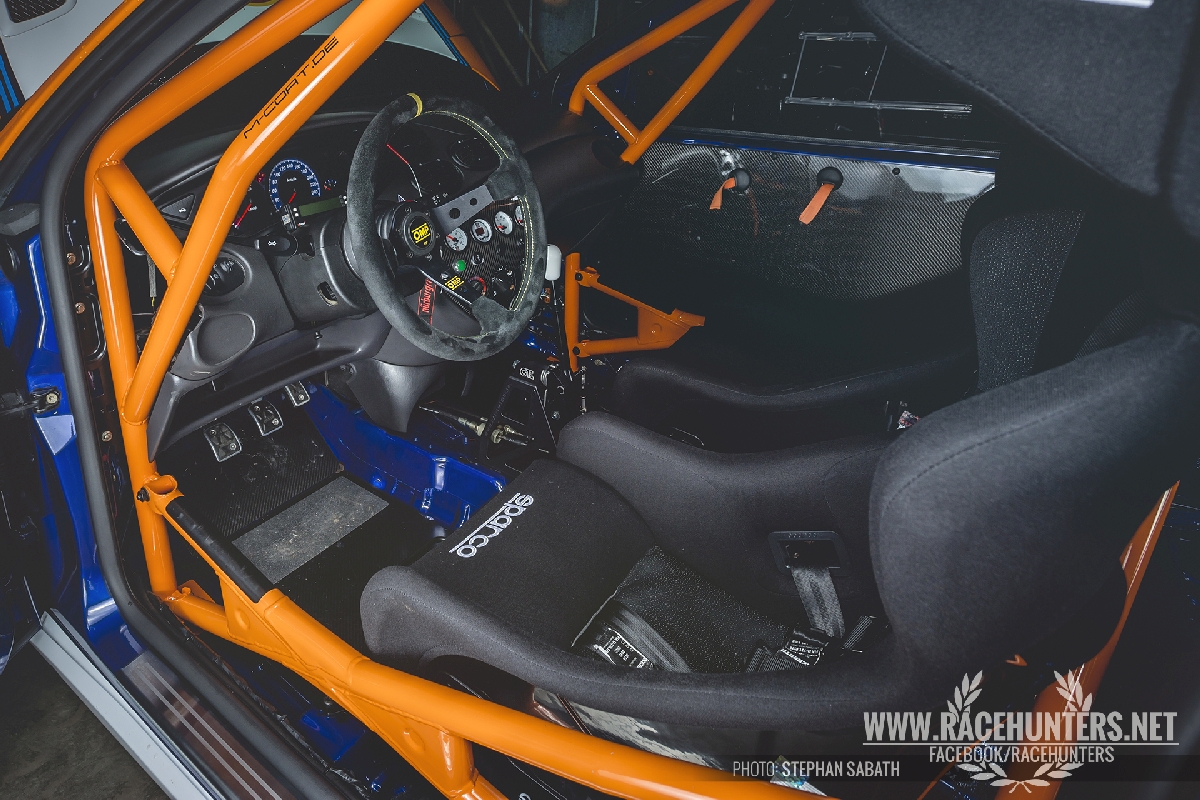 The handy sport steering wheel comes from OMP and the CAE ultra shifter is actually a must, just like the numerous Stack additional instruments and the six-point belt. 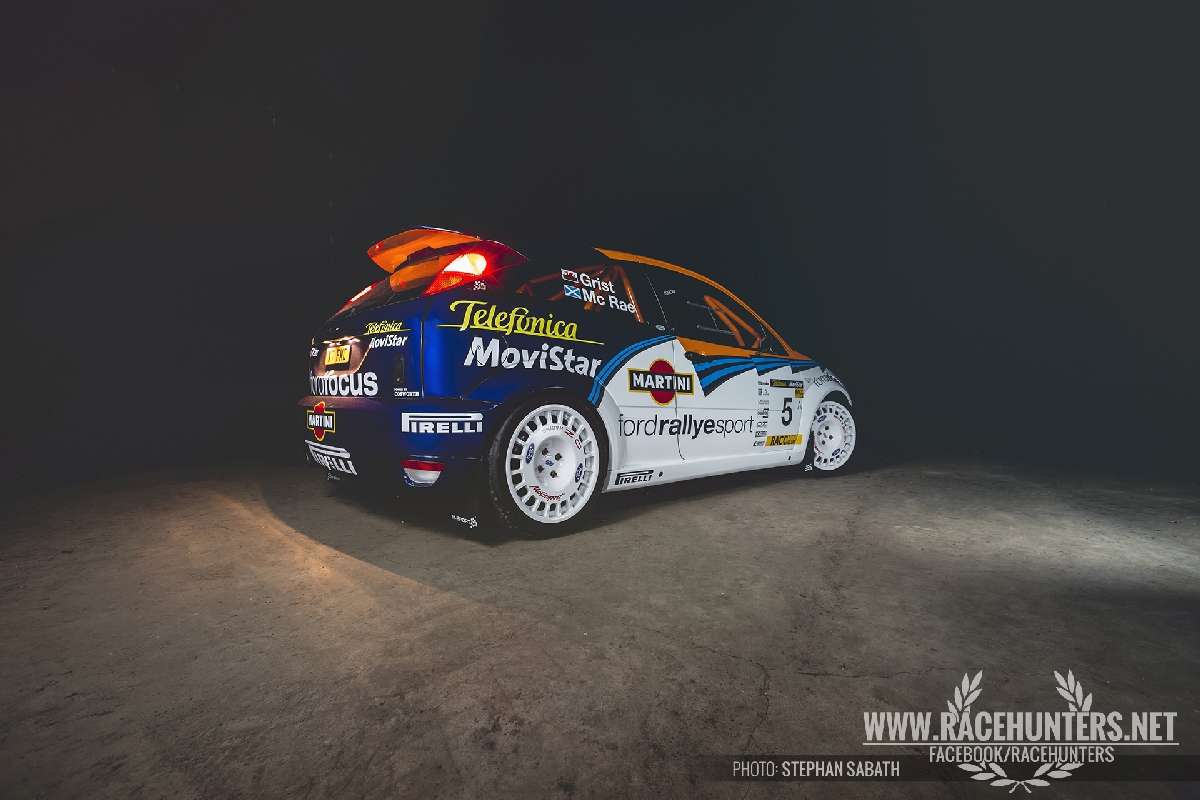 Sebastian often drives in his Focus RS on the Nordschleife or other race tracks. Maybe we will meet him some time at a track day or we can race with him over on a very special track with a famous corner close to the KW HQ in Germany.