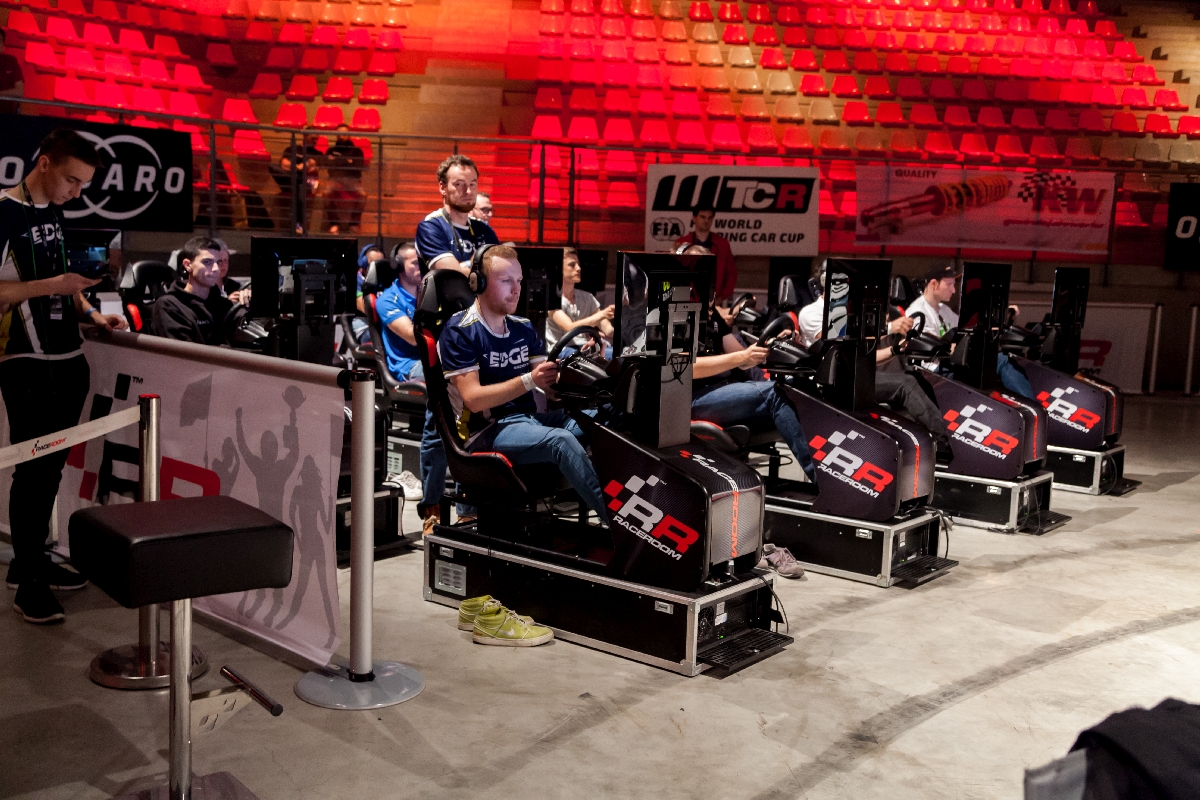 Last weekend, it was time for the Esports showdown at the Nürburgring – the Esports WTCR Oscaro Launch Event, held on RaceRoom. And the stakes were high in the Esports event: A 25.000€ prize pool was distributed amongst the drivers, split over four divisions.

James Kirk joined the presenter’s team, just like in the online races, and the whole RaceRoom crew was ready at the Nürburgring, having prepared an impressive stage and no less than 48 simulators for the event. Several hundreds of simracers, including almost all stars of last year’s online season, attended the event with hopes of winning their share of the big prize pool. 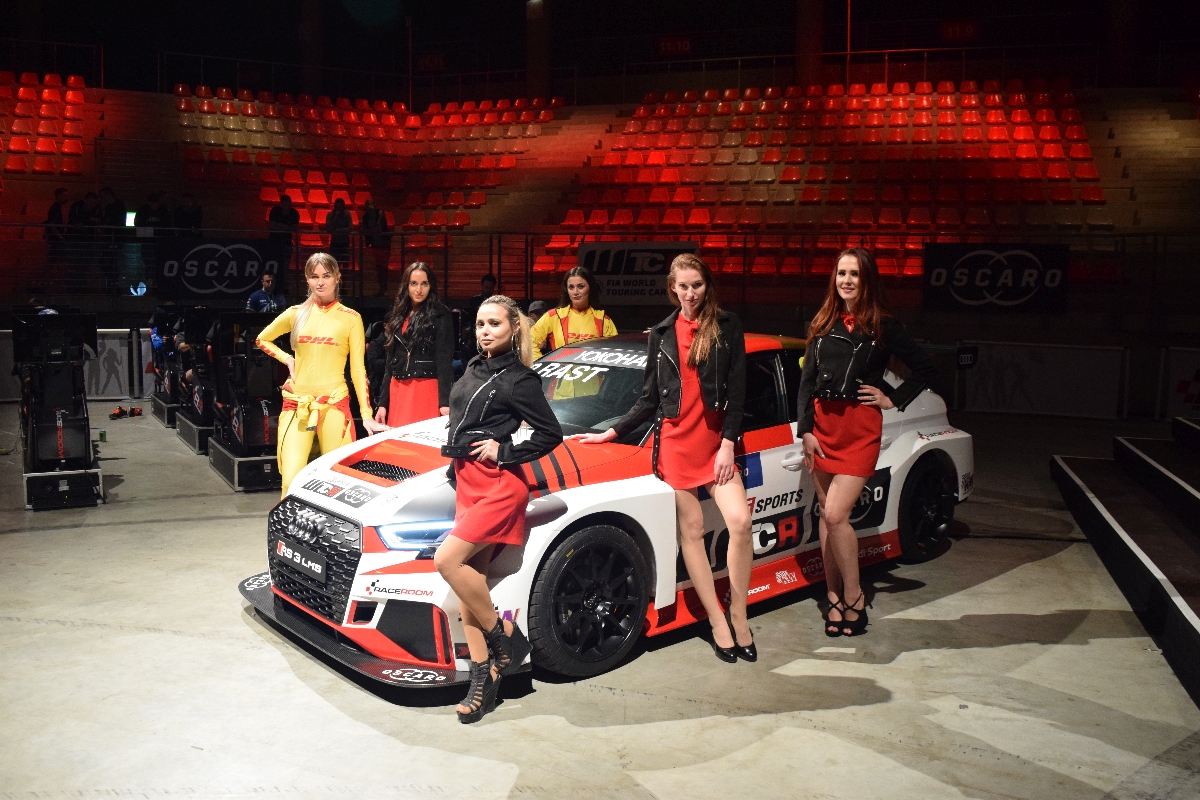 Oscaro and KW joined up as partners of the event, while Audi provided the official car of the competition with the Audi RS 3 LMS, competing both on the real track as well as on the virtual one. The occasion was special too: The Esports WTCR Oscaro Launch Event was held in the ring°arena at the Nürburgring, only a few meters away from the track. The 24 hour race and the FIA WTCR Oscaro races of Germany were held on the same weekend. 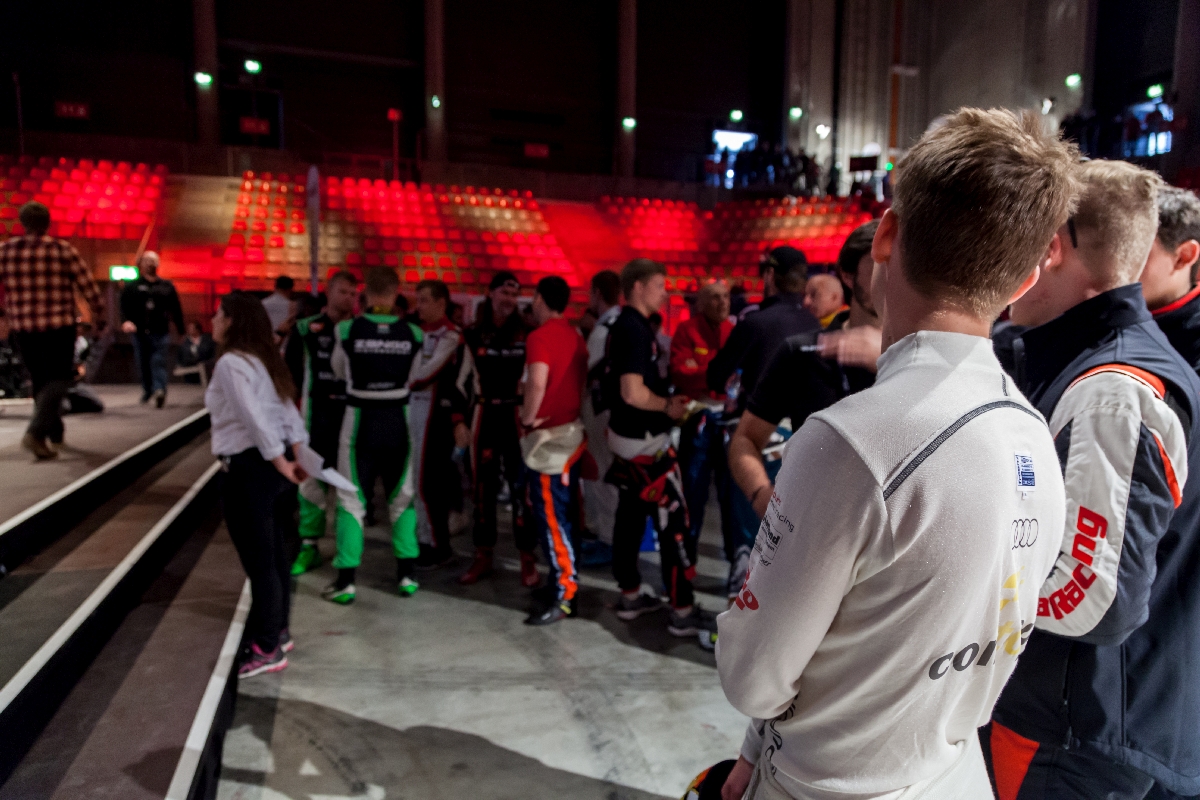 As René Rast was getting ready for his first drive in the real Esports-liveried Audi RS3 LMS, the simracers were getting ready for the first drive on the leaderboard with the virtual equivalent. Immediately, it became clear that the competition was on the highest level, even tougher than online, and drivers registered for session after session, to qualify for the races in the 4 Divisions. 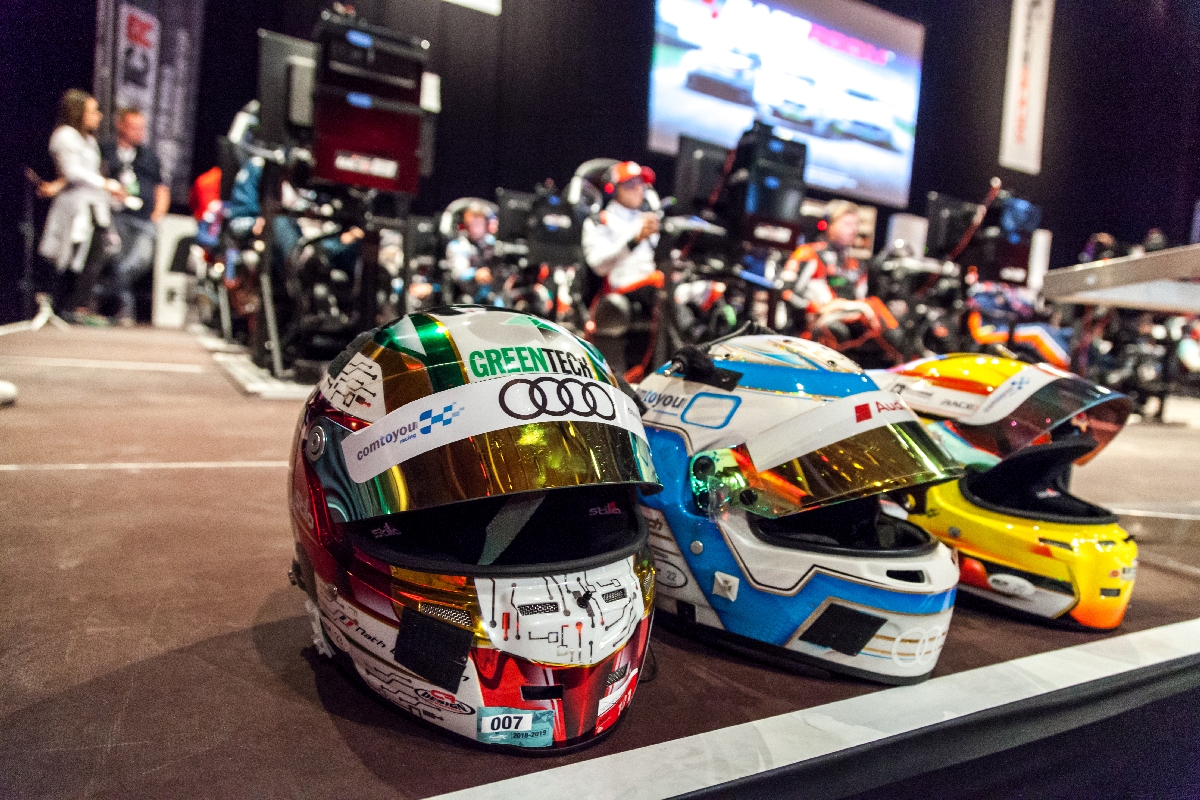 On the top of the leaderboard, Julian Kunze (EURONICS Gaming) set the pace early on, before Hungarian Gergo Baldi (EDGE eSports) took over the lead. Tim Heinemann (Turn1) tried his best at the end of the session, but he couldn’t beat the time of Baldi. Behind Heinemann, Rebernak (EDGE eSports), Dornieden (Veloce Esports) and Leaune (Oscaro eSports) rounded out the top 5. All 22 drivers in the top division were separated by less than half a second, and between P22 and P23, it was less than half a tenth. 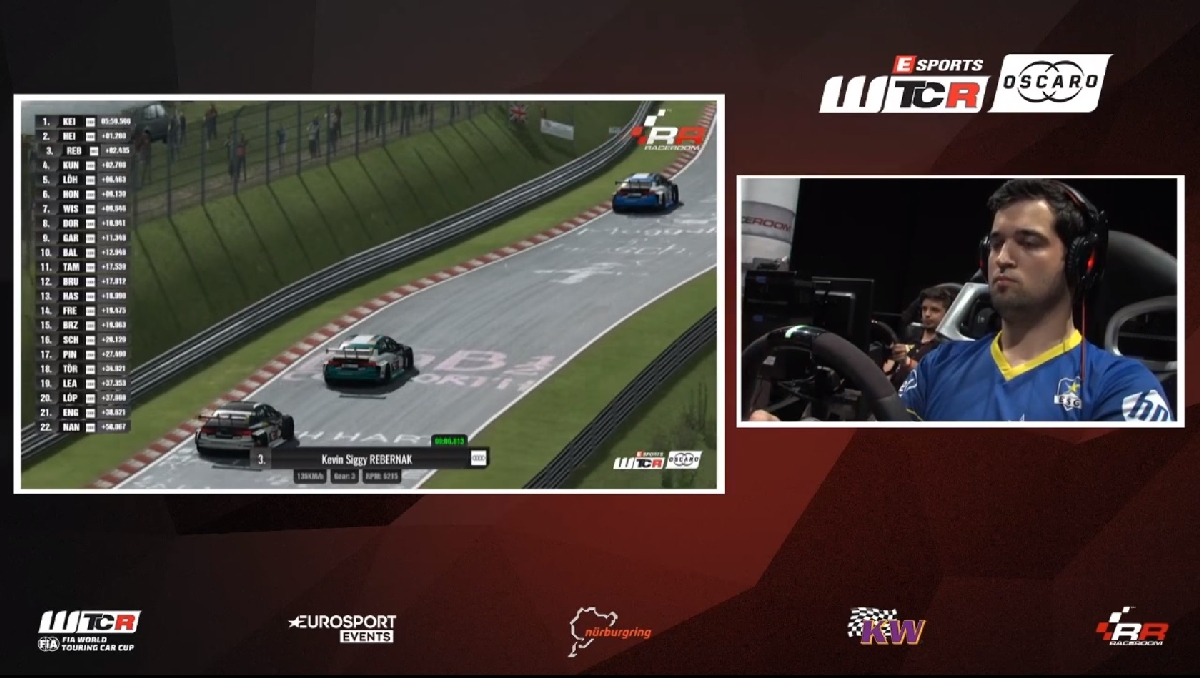 On Saturday, the tension was rising. No less than twelve races, three in each division, were coming up, and before the practice session, the drivers queued up on the grandstands to get as much track time as possible. The first race of the evening was held in Zandvoort, and the peace between the drivers lasted for 4 corners, until Leaune and Keithley collided on the qualifying outlap. The quickest driver in the qualifying was Slovenian Kevin Siggy Rebernak, who took pole ahead of Kunze, Baldi, Jack Keithley (ACR Zakspeed) and Moritz Löhner (Independent). 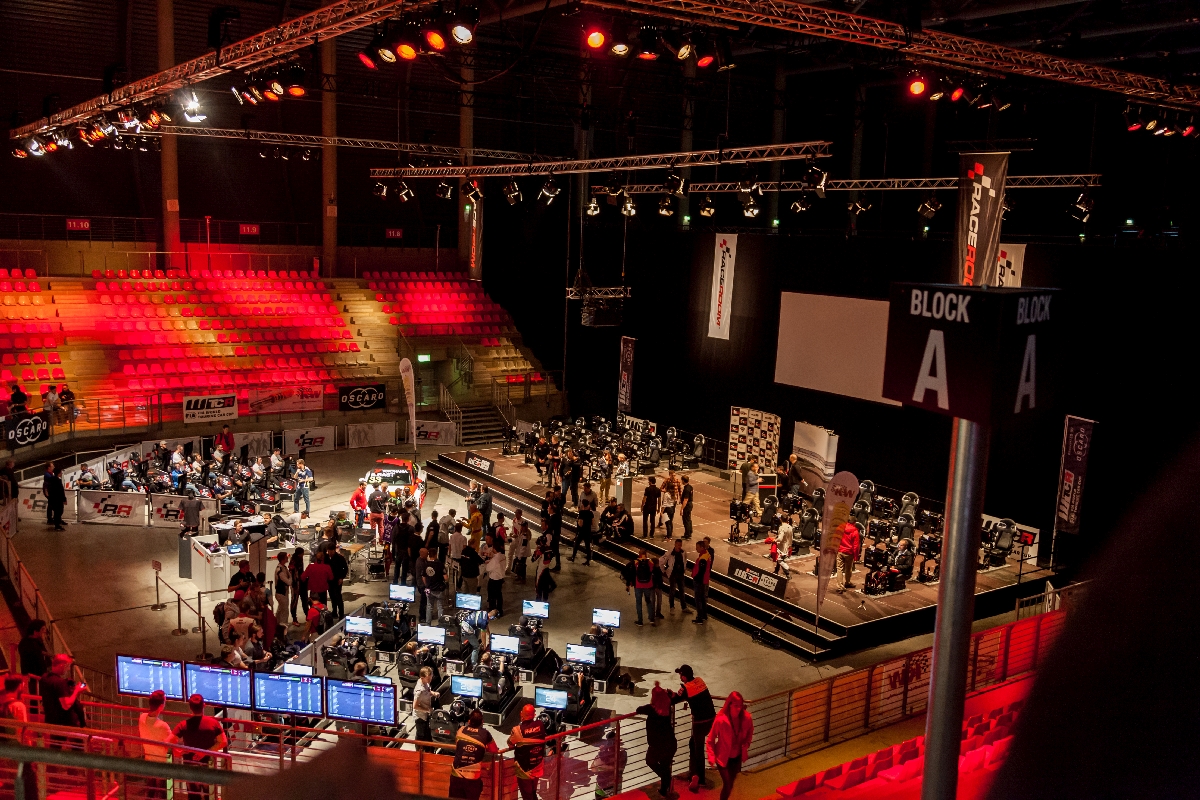 When the lights went out, Kunze had a great start and he shot into the lead with a fantastic clean pass around the outside against Rebernak. The two drivers started to gap the field, but behind them, it wouldn’t stay as clean. Fierce rivals Heinemann and Keithley got into a battle early on, which later also involved Leaune, Löhner and Baldi. In the end, it was Heinemann who made his way onto the podium, but the victory went to Julian Kunze ahead of Kevin Siggy Rebernak. 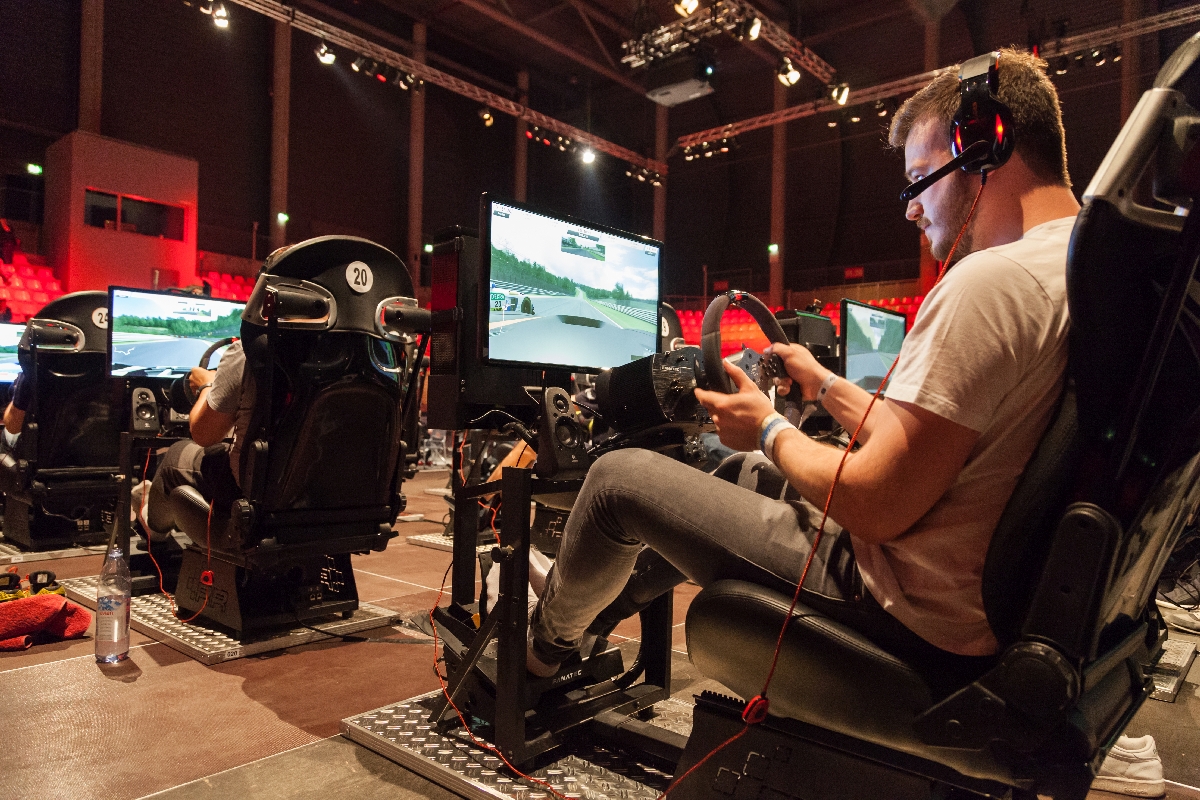 For the second race at Hungaroring, the cards were completely reshuffled. Nikodem Wisniewski (Oscaro eSports) from Poland, who was driving in the bottom half of the top 10 in the first race, took a shock pole position ahead of Gergo Baldi and Florian Hasse (EDGE eSports). 2017 eSports WTCC Champion Alexander Dornieden was in 4th ahead of Keithley, while Heinemann was only 7th, Kunze 9th and Rebernak down in 11th. 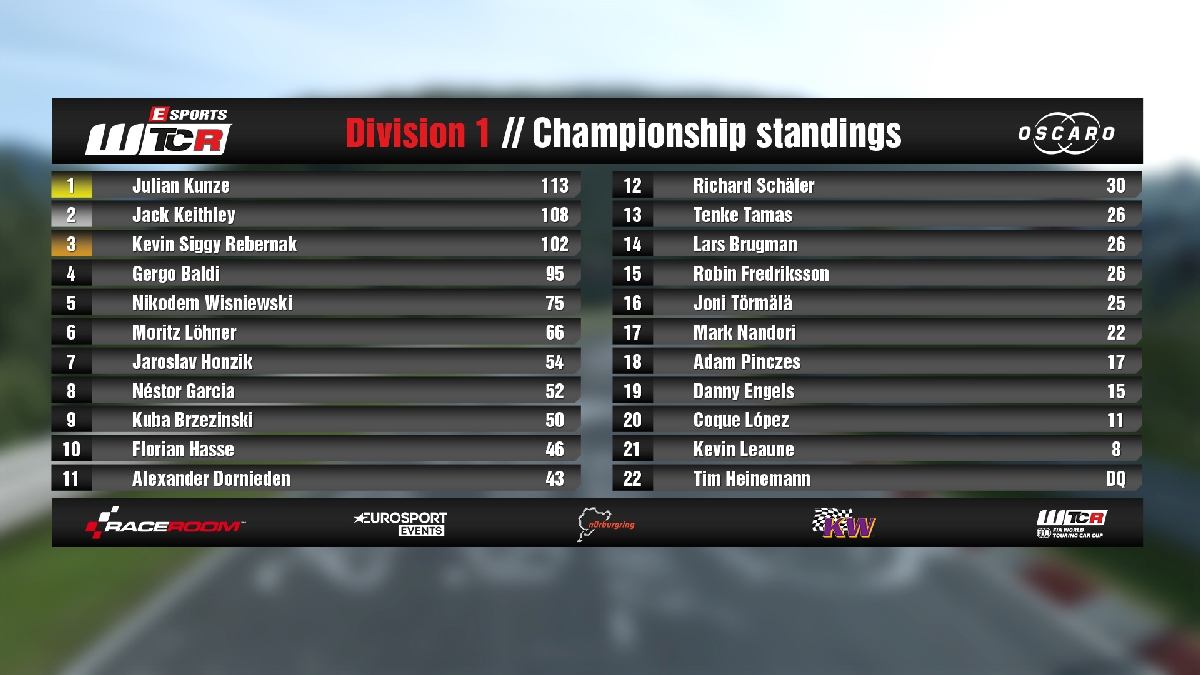 At the start, Heinemann shot up into 3rd immediately, but he picked up a penalty on the first lap, dropping down to the bottom of the field. Wisniewski and Baldi fought for the lead, and Baldi pulled off a fantastic pass around the outside to claim the lead and eventually the win. Keithley ran a lonely race in 3rd, but behind him, Julian Kunze and Kuba Brzezinski (Ragnar Rdest) impressed the audience with a stunning battle and several position changes, with the better end for Kunze. With the results of the second race, Kunze and Baldi were tied on points for the championship lead, heading into the final race on the Nordschleife, while Rebernak and Keithley also held realistic chances to take the title. 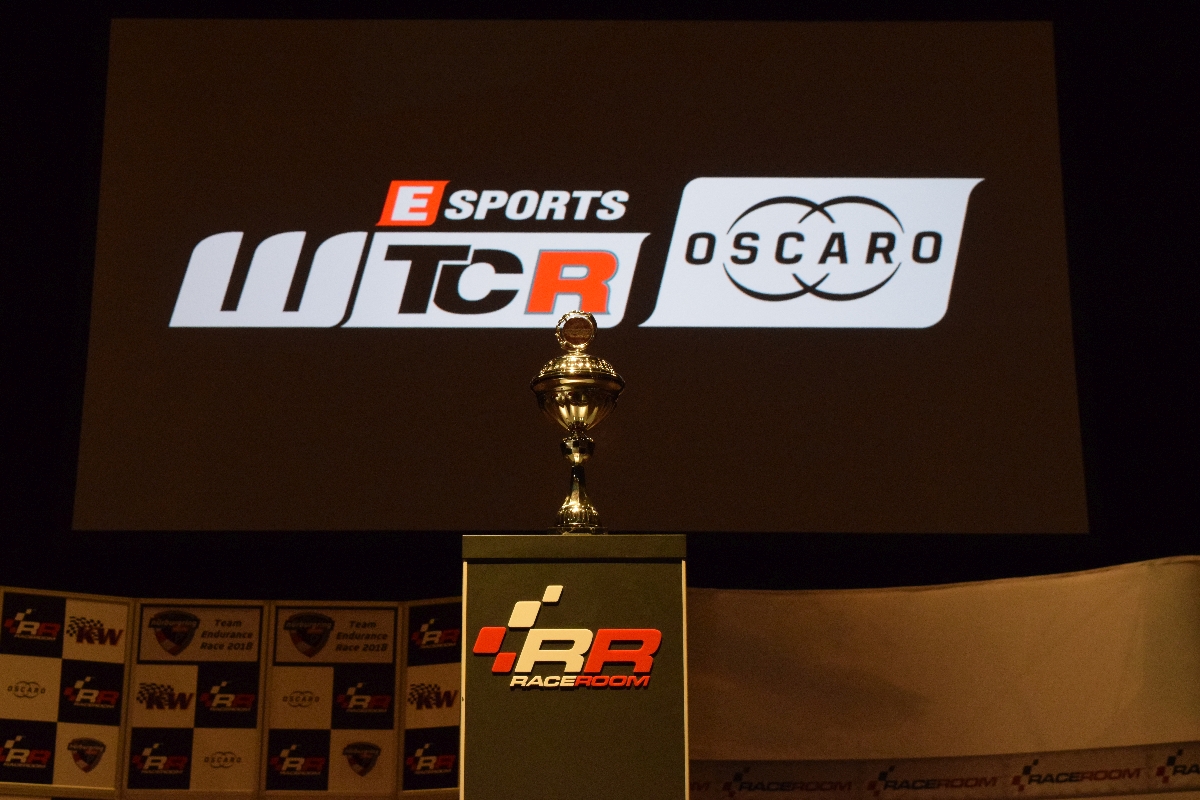 In the Nordschleife qualifying, drama struck for Baldi as he had a technical issue on the beginning of the session. He was not able to complete his qualifying lap, and had to start from the back of the grid. Jack Keithley kept his championship hopes alive by taking the pole ahead of Kevin Siggy Rebernak. Julian Kunze started in 5th, behind Heinemann and Wisniewski. Keithley won the start and stormed off into the distance, mastering the “green hell” like no other driver, while Kunze got into 4th place. Heinemann passed Rebernak with a brave move early on, which led to an interesting situation in the championship. Keithley and Kunze would be tied on points, if the results stayed the way they were, and the third place of Keithley in Hungary would be the tiebreaker in favour of the Brit. 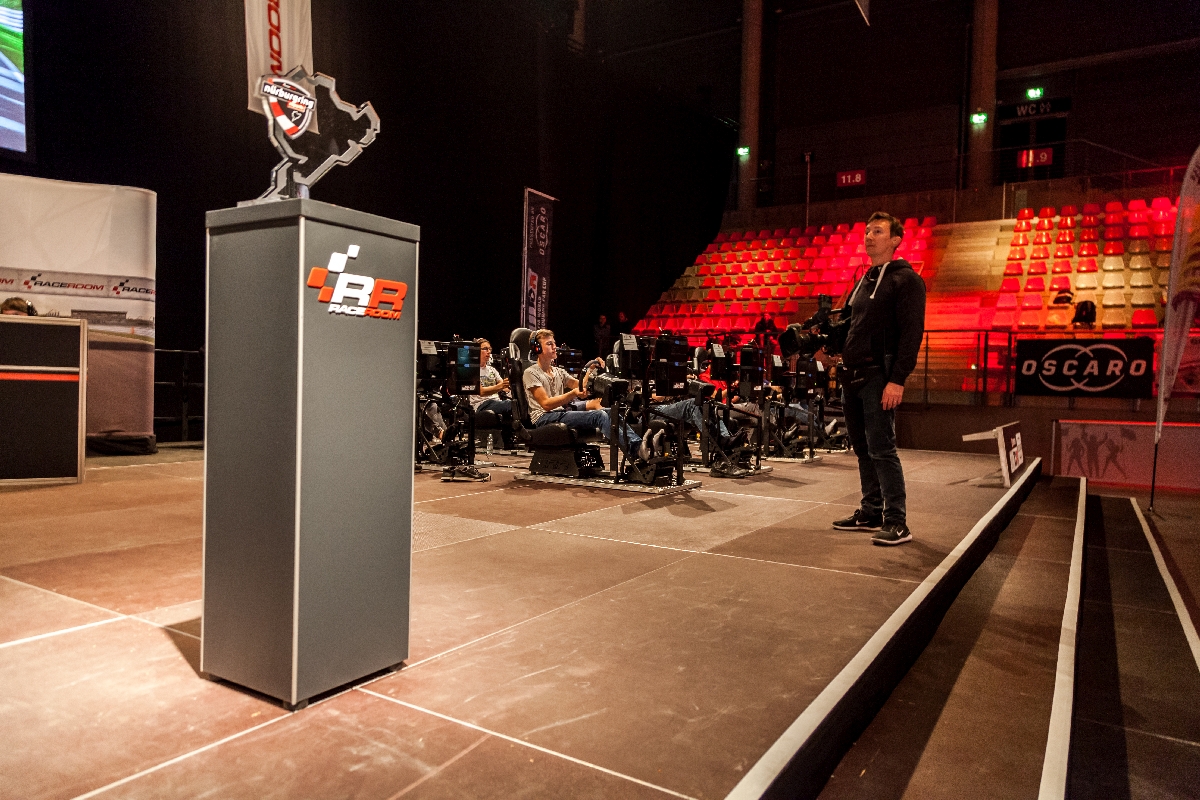 Heinemann tried to close in on Keithley, and Kunze put a lot of pressure on Rebernak, but it looked like none of the positions would change. Coming out of the final chicane, Keithley looked like the eventual champion, but Heinemann demonstratively slowed down to prevent his big rival from taking the championship. With this result, Kunze was provisional champion all of a sudden. The stewards had to take a look at the scene again, and after a long discussion, the official results were announced: Disqualification for Heinemann, but the championship title for Julian Kunze was confirmed. For Keithley, it was P2 in the end, while third place went to Kevin Siggy Rebernak ahead of the unlucky Gergo Baldi and Nikodem Wisniewski. 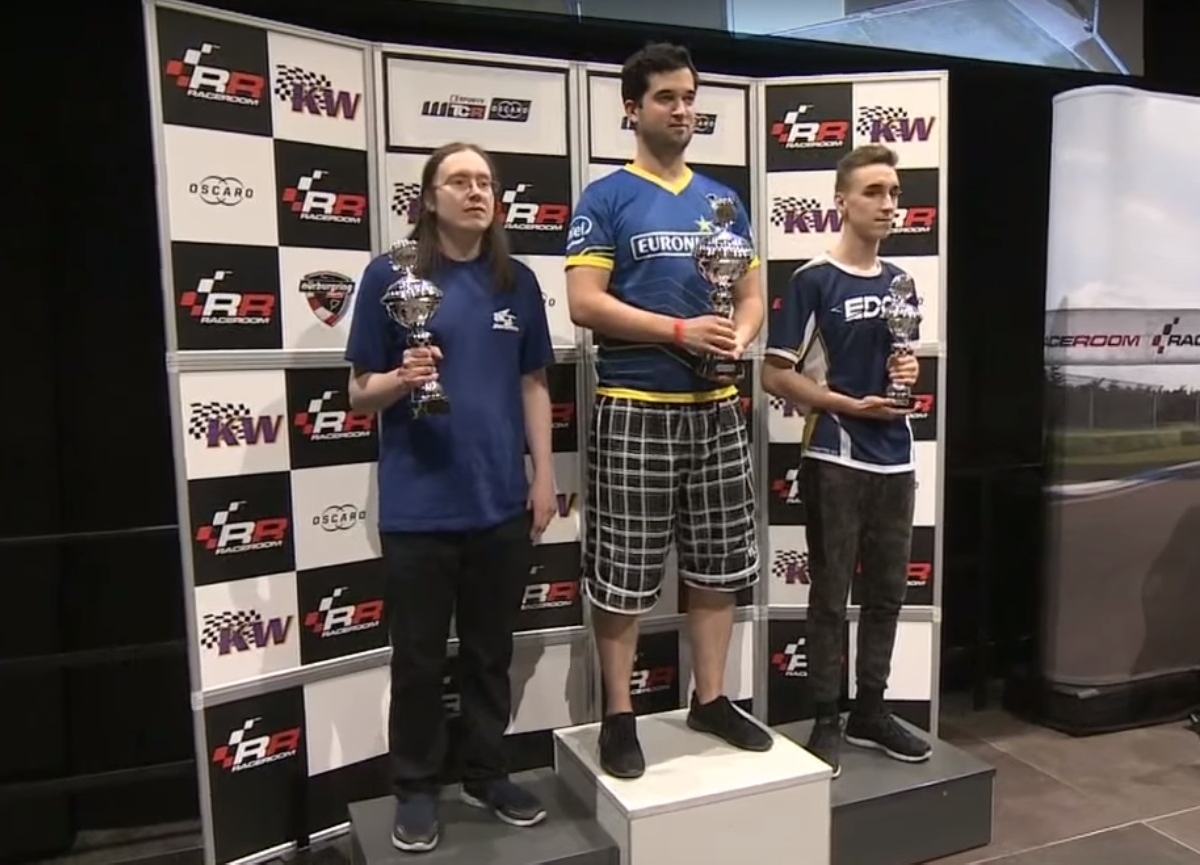 Other stories were written in the lower divisions. Division 2 was won by Swede Daniel Fredriksson, who had to face a strong challenge by youngster Tim Jarschel. Only at the final race on the Nordschleife, Jarschel made a few mistakes, while Fredriksson asserted his dominance and claimed the crown of Division 2. The hero of the races was Alex Mirea from Romania though, who completed the whole event with a broken leg and even finished in 17th. Division 3 was won by Rico Kistenmacher, while Max Duhr won in Division 4. Preparations are proceeding for the upcoming online season of the Esports WTCR Oscaro, as well as for the release of further WTCR cars for RaceRoom. Stay tuned!