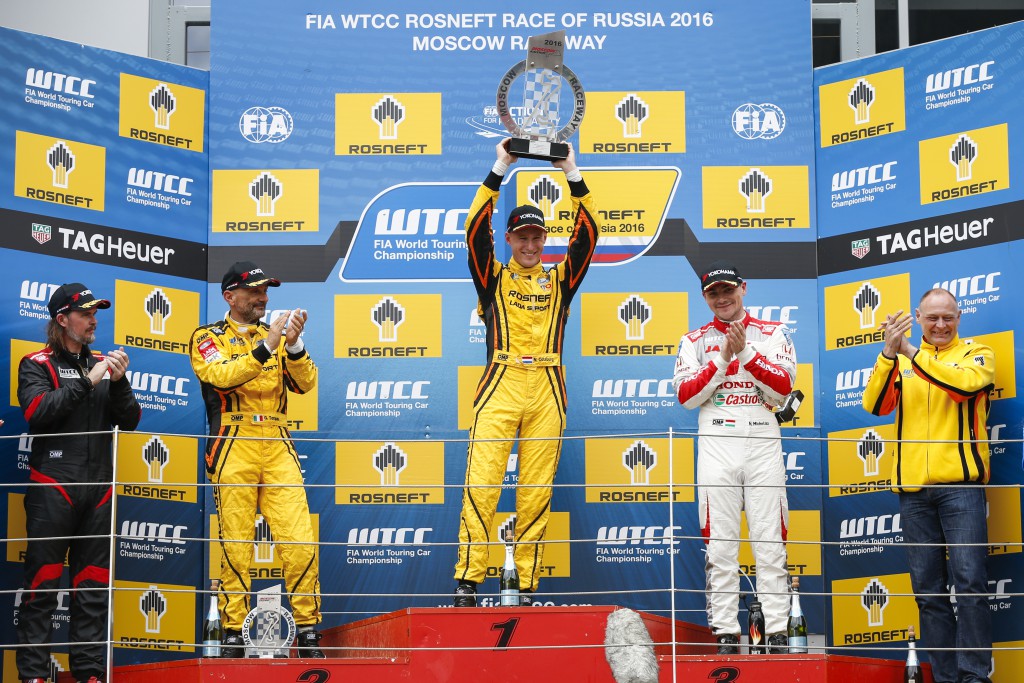 LADA Sport Rosneft made it a home round of the FIA World Touring Car Championship to remember with Nicky Catsburg and Gabriele Tarquini claiming an emphatic victory double for the Russian squad at the Moscow Raceway today.

Tarquini topped a LADA 1-2 in the all-action Opening Race with Catsburg leading home from the DHL Pole Position to win the Main Race for his first triumph in the WTCC. Yvan Muller completed the Opening Race podium for Citroën behind Catsburg with Honda’s Norbert Michelisz joining Catsburg and Tarquini on the Main Race rostrum, much to the delight of the 20,000 local fans. 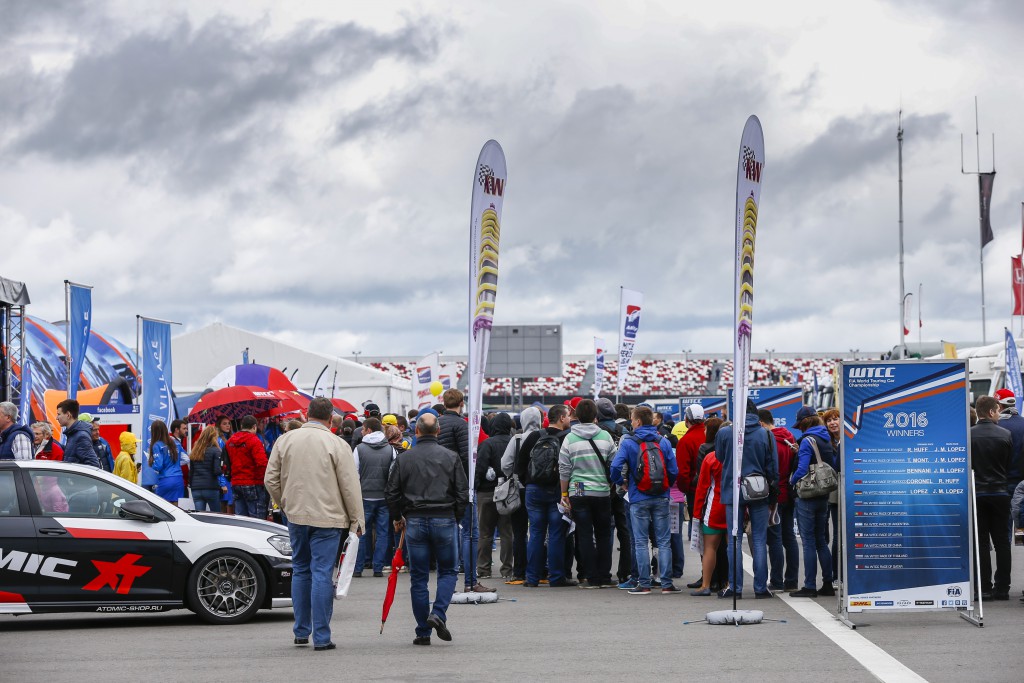 Elsewhere, James Thompson was a double winner in the WTCC Trophy for independent racers, while Ferenc Ficza, who turned 20 last month and is the youngest driver in the championship, won the TAG Heuer Best Lap Trophy to round out an encouraging weekend for the Honda privateer, who made light of the difficult weather conditions despite his limited experience. Famous Russian actress and friend of the brand Maria Shumakova presented Ficza with a TAG Heuer watch for his efforts. 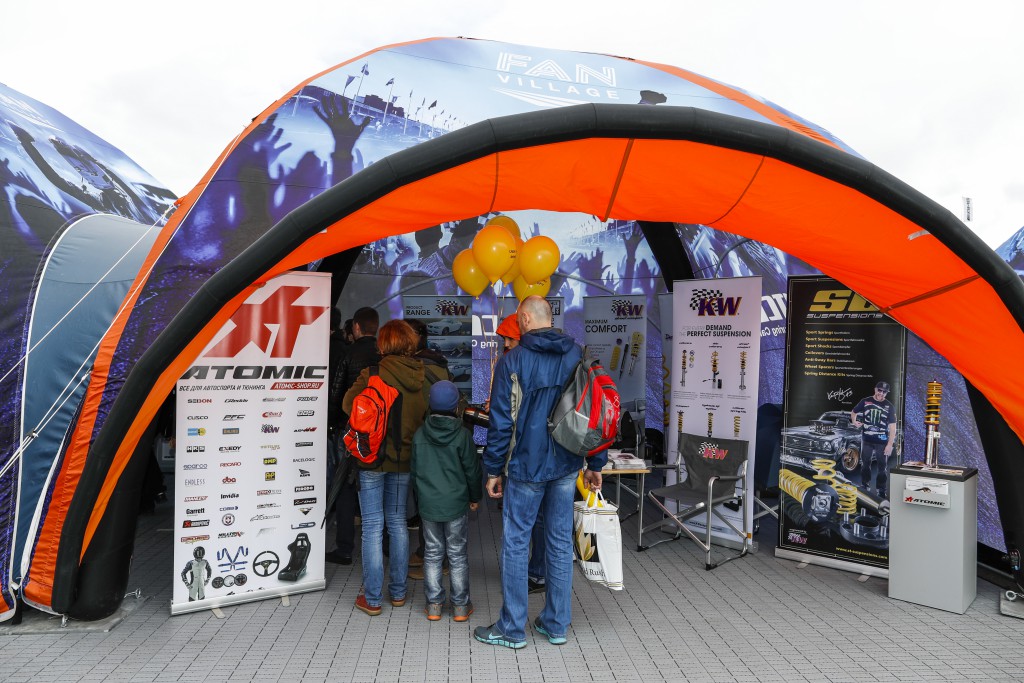 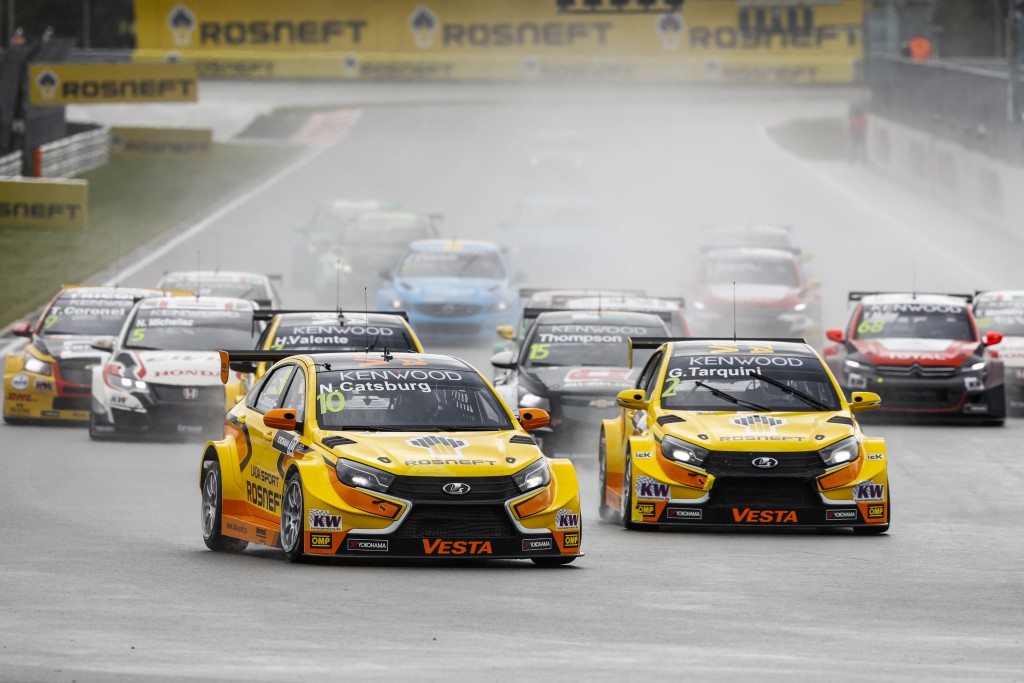 Gabriele Tarquini charged to his first victory for LADA in the WTCC as the wet weather shook up the Moscow Raceway. The rain caused the start to be delayed when it fell on the formation lap, with all drivers on slick Yokohama tyres. All switched to wet covers for the start proper, which Tiago Monteiro initially led from pole before slipping behind Yvan Muller, Mehdi Bennani, José María López and Tarquini, who had made a great getaway from ninth on the grid. 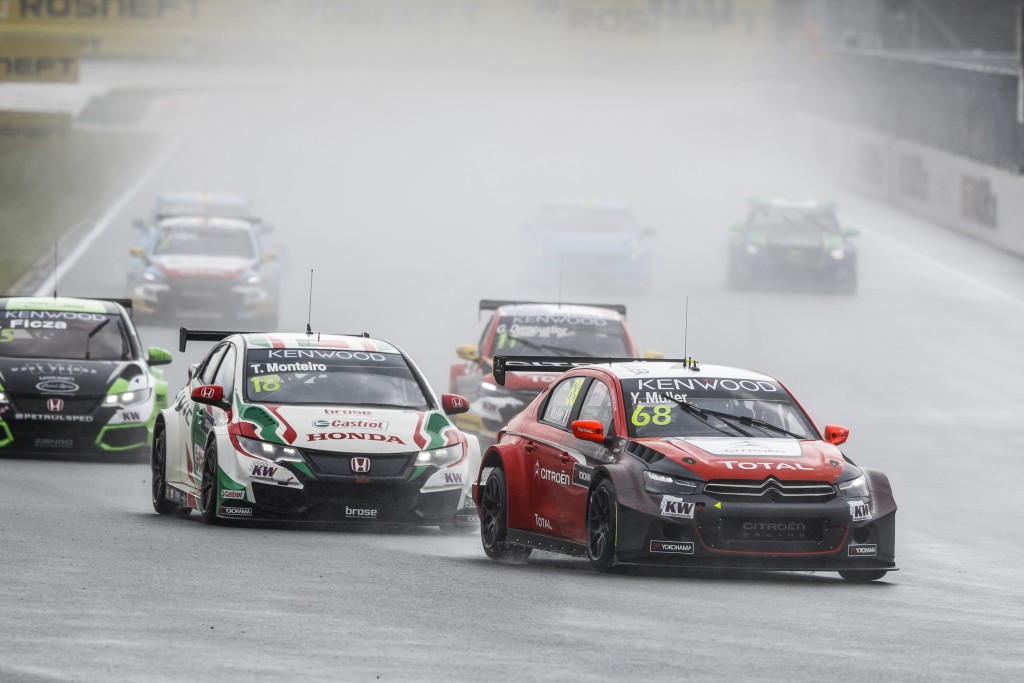 As had been the case in qualifying, the LADA Sport Rosneft trio excelled in the wet, with Tarquini working his way up to second and cutting the gap to Muller to pass the Frenchman on lap five. The Italian veteran was able to take his 21st WTCC victory by 4.782 seconds over team-mate Nicky Catsburg, who surged from P10 on the grid and passed Muller for second on lap nine of 15. Muller finished a distant third for Citroën, with Hugo Valente taking fourth in the third LADA ahead of López, who was chased across the line by the Honda duo of Monteiro and Rob Huff as well as the Chevrolet of James Thompson. The ALL-INKL.COM Münnich Motorsport driver claimed the WTCC Trophy honours with a pass on Bennani, who fell back to ninth as the race wore on. Norbert Michelisz and Tom Coronel were handed drive-through penalties for being out of position at the start, and finished P10 and P12 respectively with John Filippi finishing in between.

Nicky Catsburg secured his maiden WTCC victory in the Main Race at Moscow Raceway, as LADA clinched a double one-two on home soil. In another wet race, Catsburg led from start to finish ahead of his team-mate and Opening Race winner Gabriele Tarquini. Catsburg led by more than three seconds at one stage, but as the track began to dry, he found himself under increasing pressure from Tarquini and the Italian cut the gap to just one second, but Dutch driver Catsburg held on. Honda’s Norbert Michelisz looked as if he would offer up a challenge to LADA when he charged from fifth to third on the opening lap. 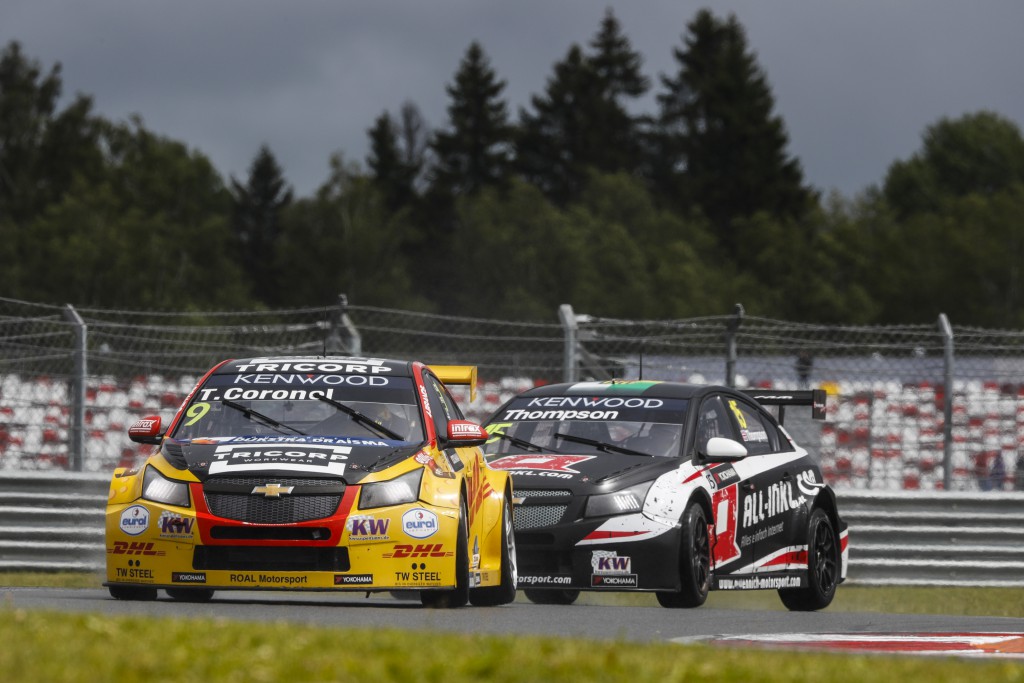 After pressuring Tarquini for several laps, the Hungarian would finish up 12s behind. He was shadowed home by his team-mates Rob Huff and Tiago Monteiro. Huff cleared James Thompson and Hugo Valente early on, and Monteiro would pass the same two drivers out of the final corner on consecutive laps before the end. Thompson overtook LADA driver Valente on the penultimate lap for sixth overall, as he completed a double WTCC Trophy triumph on his third appearance of the season in the ALL-INKL.COM Münnich Motorsport Chevrolet Cruze. The Citroën drivers struggled for speed in the conditions, with championship leader José María López the best of them in eighth, with Mehdi Bennani P10 and Yvan Muller P11. 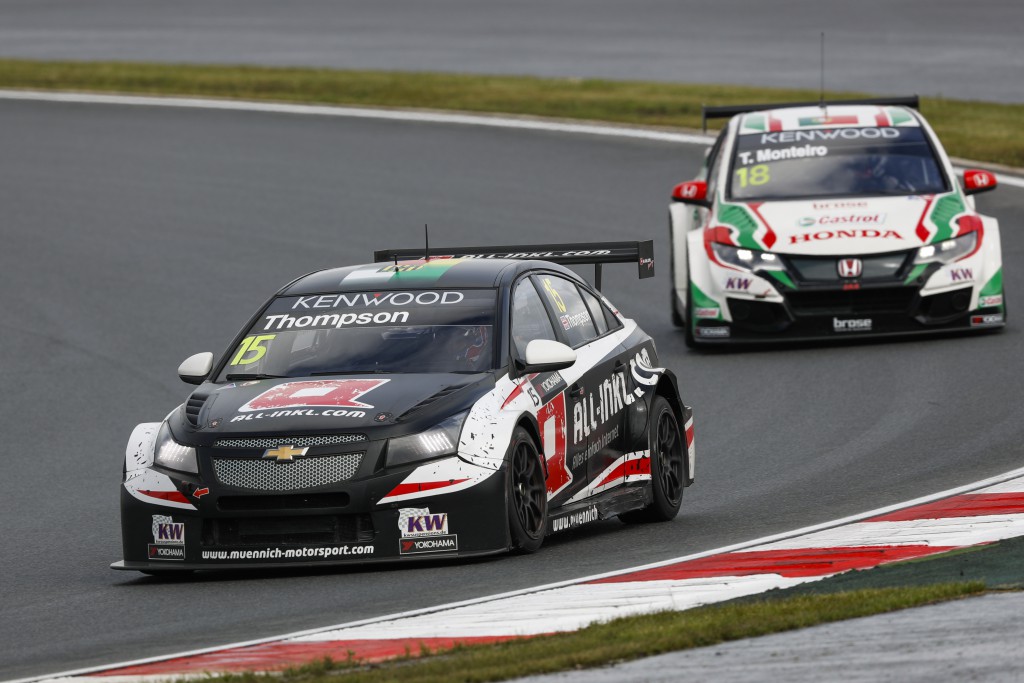 Zengő Motorsport’s 20-year-old rookie Ferenc Ficza shone in the closing stages in his Honda, winning a great fight with Muller with a superb move around the outside of Turn 3, and then also passing Bennani for ninth soon afterwards. As he pursued López, Ficza set the fastest lap of the race on the final tour to win the TAG Heuer Best Lap Trophy and his first WTCC points. Fredrik Ekblom bagged a weekend-best of P12 for Polestar Cyan Racing. 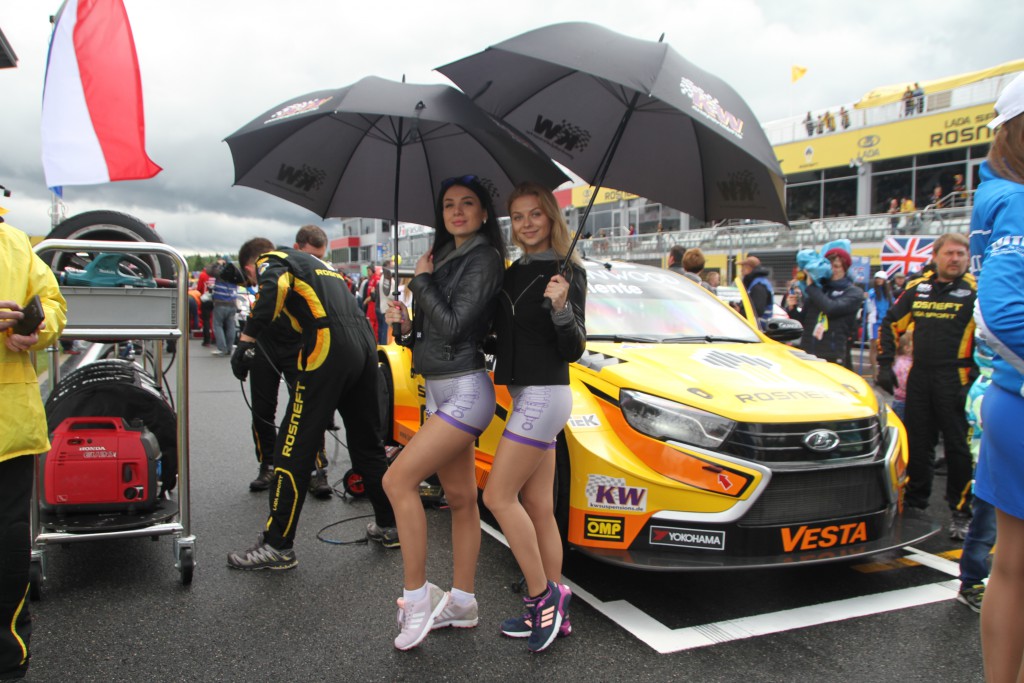