Throwback to the 90ies: The Last Action Hero from Honda

Many people who know the KW history know that almost 20 years ago we had our own racing team in the former DTC – Deutsche Tourenwagen Challenge – and among others Ellen Lohr as a driver. At that time our racing car was based on a Honda Integra.

From the suspension to the chassis and aerodynamics, to the engine, to all electronics and transmissions, everything was developed in-house, manufactured in our own garage and tuned on our own test benches. A racing car that had been “inferior” on paper until then, a Honda Integra caused a sensation and was used successfully by the own team for one year.

In a way, our colleagues from KW USA revived our own motorsport history at the SEMA Show in Las Vegas. Therefore, we exhibited a Honda Integra Type R (DC2) at our booth.

Before the Integra parked on our booth, we drove on our own four wheels from Los Angeles to Las Vegas to meet with Sidney Hoffmann and Larry Chen for a little YouTube video shoot.

Because the “KW Integra Type R” is now also available as a model car from Hot Wheels; after all, the DC2 is an absolute JDM cult car not only in the USA!

While worldwide the Integra was officially distributed as a Honda, the Japanese car manufacturer offered its sports models in Hong Kong and the USA under the brand name Acura. The special feature of the Integra Type R, which was introduced in Japan in 1995, was that the front-wheel-drive car mobilized an engine output of 190 HP from a cubic capacity of 1.8 liters – without turbo! The Integra with its 16V had a higher liter output than many a large sports car at that time.

The four-cylinder engine beneath the long bonnet is a high-revving organ with low-friction pistons, lightweight connecting rods, and high-performance valve springs. When engine builders didn’t yet have to deal with downsizing, the B18C6 revved up to the top of the rev range. At 7,300 revs, the maximum torque of 178 Nm was reached and the maximum output of 190 hp was 8,000 rpm. The rev-limiter was the spoilsport only at 9,000 revs. In Japan, the engine produced 200 hp and in the USA 195 hp.

But not only the engine was special then – and still is today – but the lightweight body is remarkably rigid. In combination with the double-wishbone axle geometry, the Integra R was a real cornering machine.

In our exhibition vehicle, which after the SEMA started at the Super Lap Battle x Global Time Attack 2018 in the “Limited FWD” class, we installed a 3-way adjustable KW Competition racing suspension. The brake system is a Spoon Sport brake kit. The steel braided brake lines are also from Spoon.

If one of you is the owner of a Type R, you can get the full range of KW Coilovers for the street. Beside our version 1 and Variant 2, most Integra fans choose our KW Variant 3, which is separately adjustable in compression and rebound. If you order a Coilover suspension from us, please check if you need a fork or eye mount for the rear axle.

With the interior, everything has remained almost in series production conditions up to now. Currently, there is “only” a Sparco shell for the driver and a removable Spoon sports steering wheel and a Spoon gear knob. The pedals are rare Mugen hardware.

The mounted rear wing is from Voltex. The rear wing was mounted on the boot lid via two aluminum feet. From the CAT onwards, a flow optimized GReddy Racing stainless steel exhaust system winds its way along the underbody; it has even less back pressure than the standard exhaust system installed ex-works.

The rims on the “Hot Wheels” style side, the passenger side, are Titan 7 T-S5 five-spoke forged wheels, which we had coated white. At the front and rear axle, they measure 8.5 x 17 inches and as rubbers, we have mounted Yokohama Advan A052 sports tires in 205/45R17.

The front splitter is from PCI and was extended with a black laminated self-made cup sword. But not only at our photo shooting the Integra Type R was fast.

About 14 days after the SEMA show, Dai Yoshihara piloted the DC2 to second place in the “Limited FWD” class at the Super Lap Battle x Global Time Attack 2018! Not bad for a rather close-to-production “JDM legend” from the nineties… 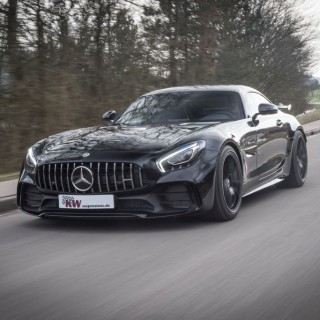 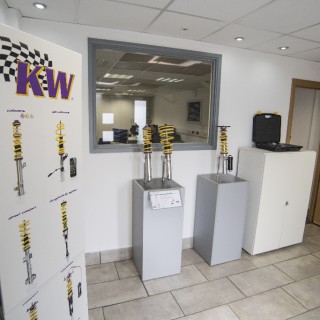 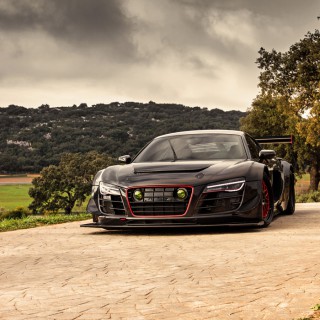 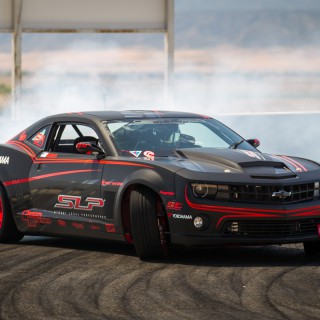 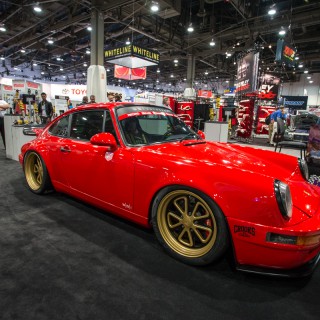 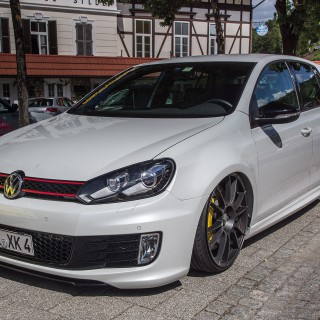