Hollywood in Vegas – tracking a RWB! 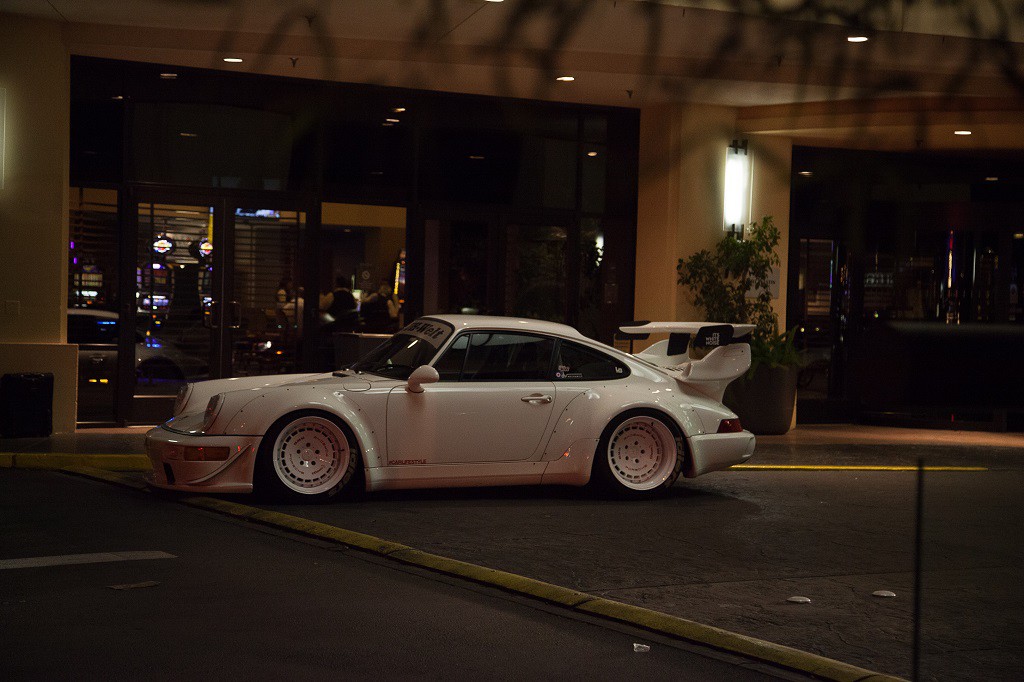 When the night has come in Vegas what should you do as a German? Going lost at the strip? Visiting the Hofbrau Haus or even better, going to a shooting range and fire a Panzerschreck? Feeding some crazy slot machine with your last Dollars? No, I’m not this kind of German tourist. I have a mission. Hunting one of the rare  Porsche. “RWB Porsches”. Rare? Yes, in Germany these kind of Porsches are rare – we don’t even have one with a German car id! I’m not kidding! 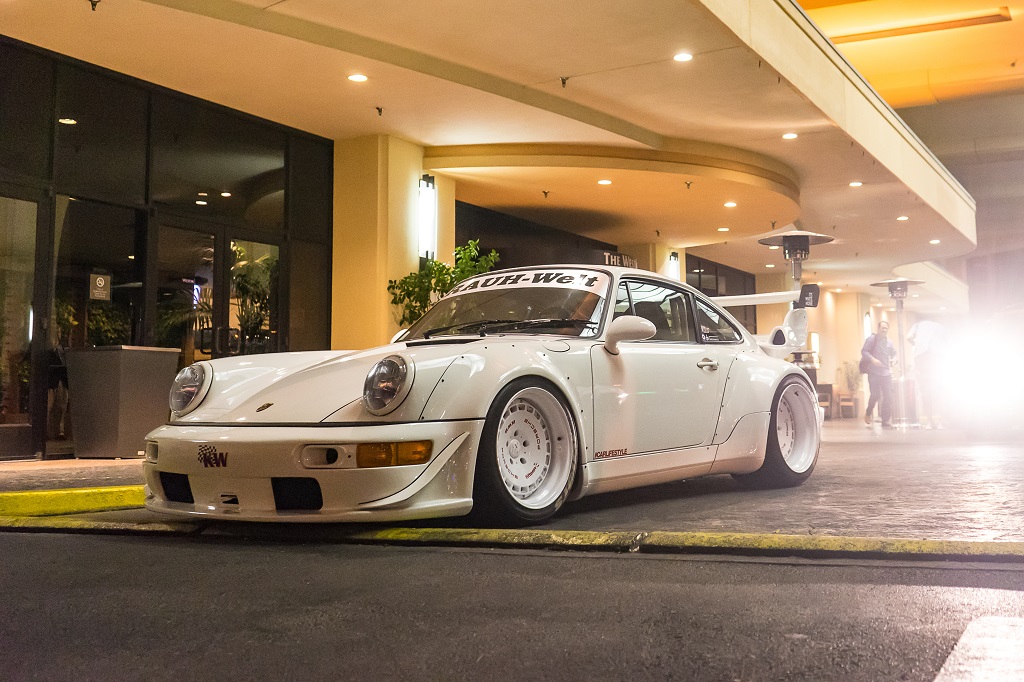 At the front of the lobby of the hotel “The Westin” I finally tracked down the 964. Low as hell, ultra wide and awesome Fifteen52 rims with semi tires! A Porsche like you think he left just some minutes ago a racetrack and hit the wrong lane for the pit stop. But it isn’t true. This Porsche only wearing the small street version of a Rauh Welt Begriff Bodykit … 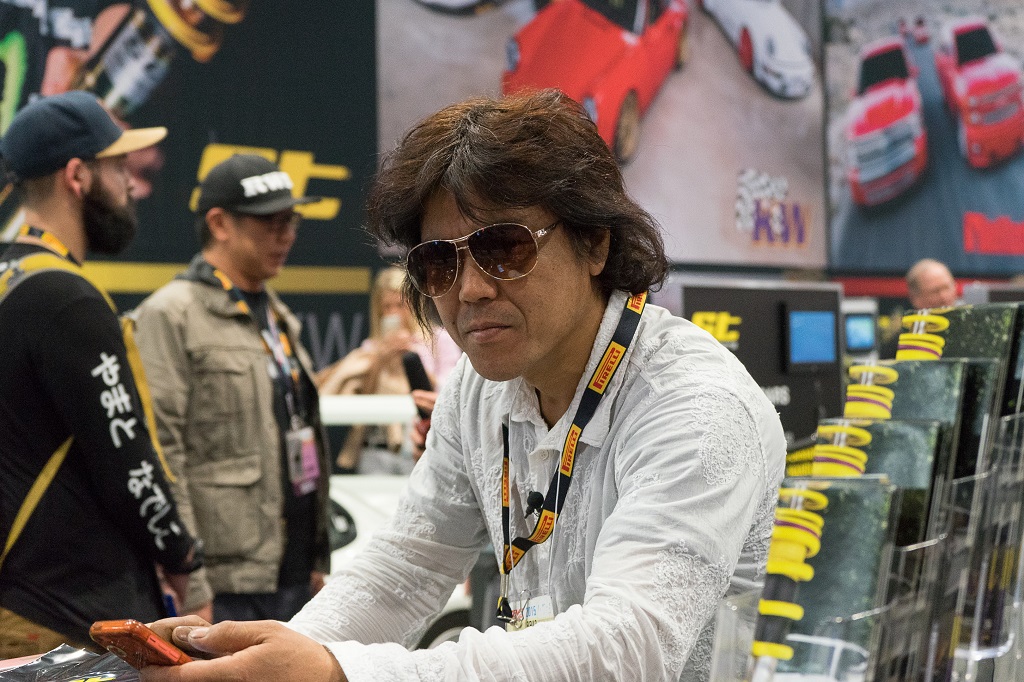 Like every Rauh Welt Begriff Porsche RWB Mastermind Akira Nakai build this nice white 964. “Until October this year I build 22 Porsche and this one lives around Los Angeles”, told me Akira himself in his beautiful “Jenglish” (Japanese accent English) at the SEMA show later these days. But I should be silent with my Schwarzenegger-English, but anyway we are petrol heads and we all speak one language somehow. 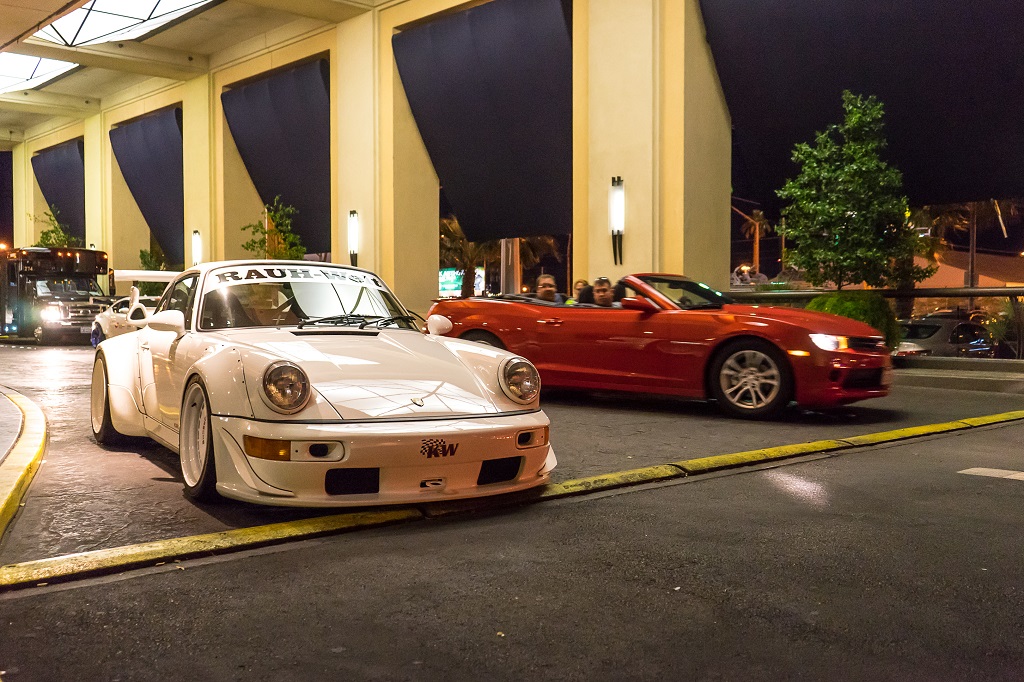 If you want to ride a “Rauh Welt Begriff”, you can’t call Akira in Japan and give him the order to build you one kit and he will send you his kit right away! No, this isn’t a Rieger, Vörsteiner, Ruf or any standard bodykit. It is a piece of art. And so it is no wonder the guys in the red Chevy Camaro Convertible getting big eyes in dawn of SEMA 2015. But who would expect a “RWB Porsche” in the front of the Westin – I guess the lobby of the Caesars Palace or the Wynn suits a RWB more … 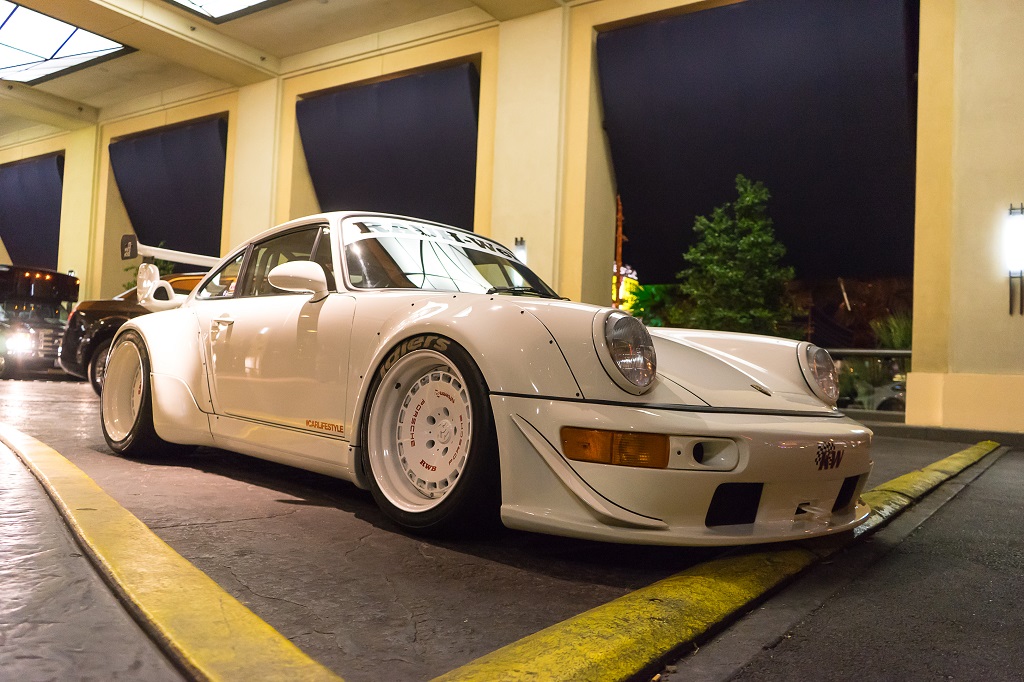 But at a Rauh Welt Begriff Porsche everything and everyone is a little bit different. Who wants to ride a “RWB” must earn the kit first. I don’t mean you need the money, that isn’t the matter, you need the connections to get a kit. A good friend of mine, this German TV-Host and KW Germany Testimonial Dude Sidney Hoffmann can tell you a thing or two about it. Since more than over a year he has had a tough time to get the kit, but now he met Akira in person. But that is a completely different story. 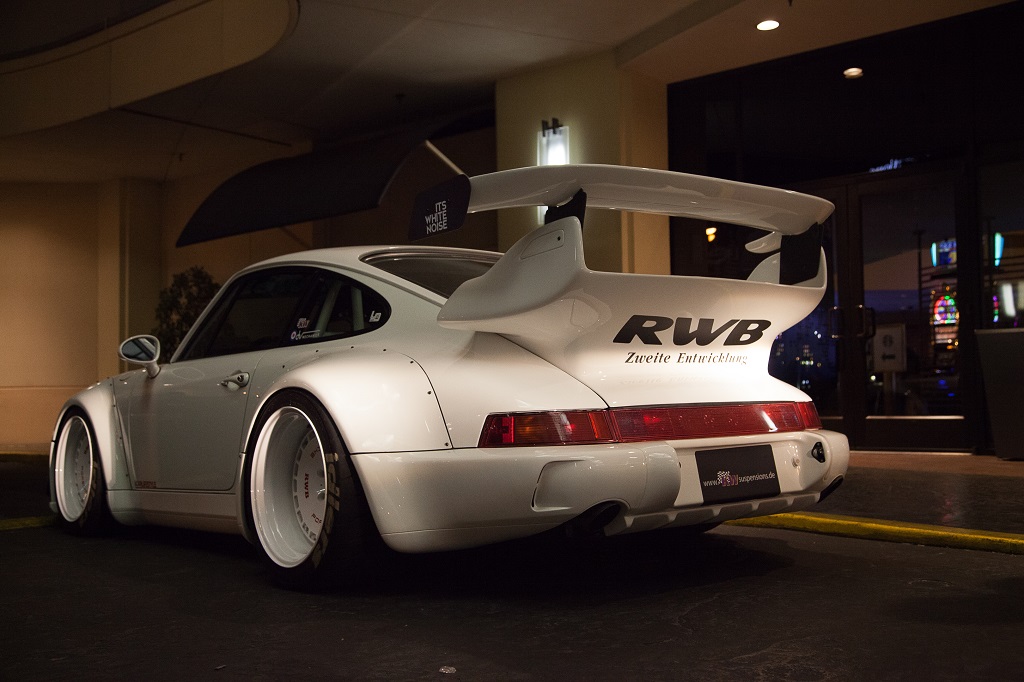 Like every little boy also Nakai-san dreamed of a Porsche 911. But he got to wait a long time to get the chance rebuilding and tuning his first Porsche. Okay Guys, if I speak in Germany to Volkswagen, Opel, BMW and even JDM fans mentioning the magic words “Rough World” only a fistful of them reacts. I hope outside of Germany you know what I mean, don’t you? 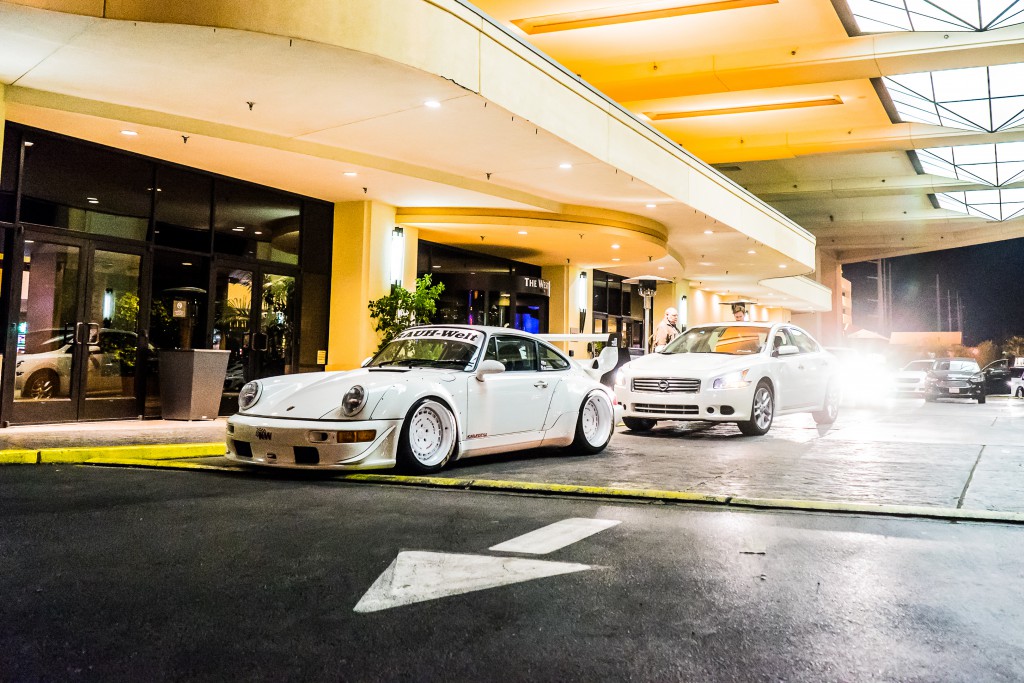 Something like the mid of the nineties Akira Nakai modified AE86 and was one of the heads of the legendary Street Drifter Gang “Rough World”. These guys drifted the mountain roads around Mount Tsukuba. This reminds me of searching my old Japanese VHS tapes of the early days of the mainstream days of drifting … In about 1996 Akira told me he got the chance to lay his hands on a wounded Porsche. He reanimated the holy piece of German Car Engineering and Akira felt punch-drunk love for the 911. It was the time he decided to drive and modify Porsche.

Today, 20 years after the even in the US popular one hit wonder “Macarena” from the Spanish Band Los Del Rio, a Rauh Welt Begriff Porsche is a kind of a lifestyle. Here in Germany a lot of so-called car experts and Porsche lovers discuss the creations from Akira Nakai – thank God everyone’s opinion is bound to be subjective. 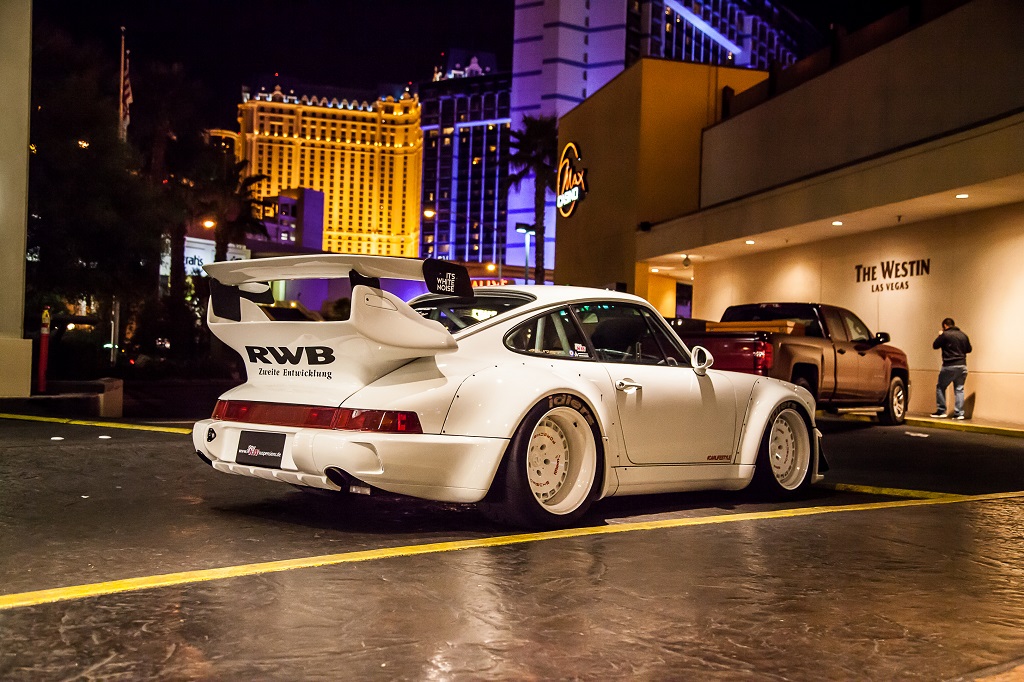 Here we got a kind of Hollywood in Vegas. By the way the 911 didn’t wear the KW stickers and KW ID plates without any reason. This Porsche was the star of the KW North America SEMA booth later the days. 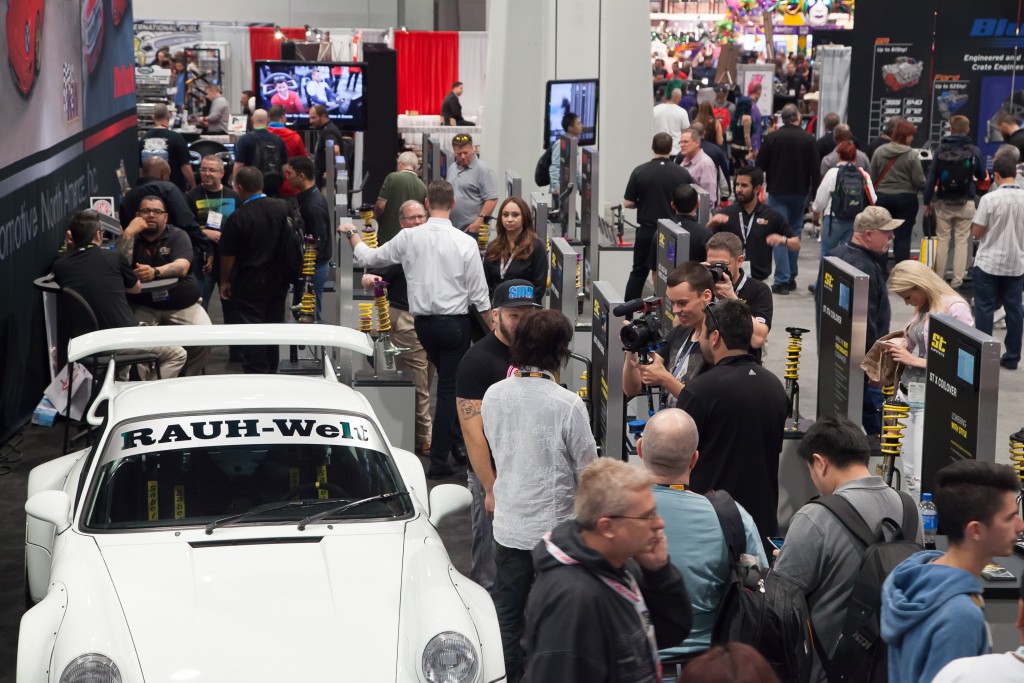 Okay, at SEMA you saw a lot of RWB later, but this 964 was one of the best. And even if a German suspension manufacturer like KW is showcasing a RWB it must be something special. Even Akira Nakai himself visited the KW booth with his friends . 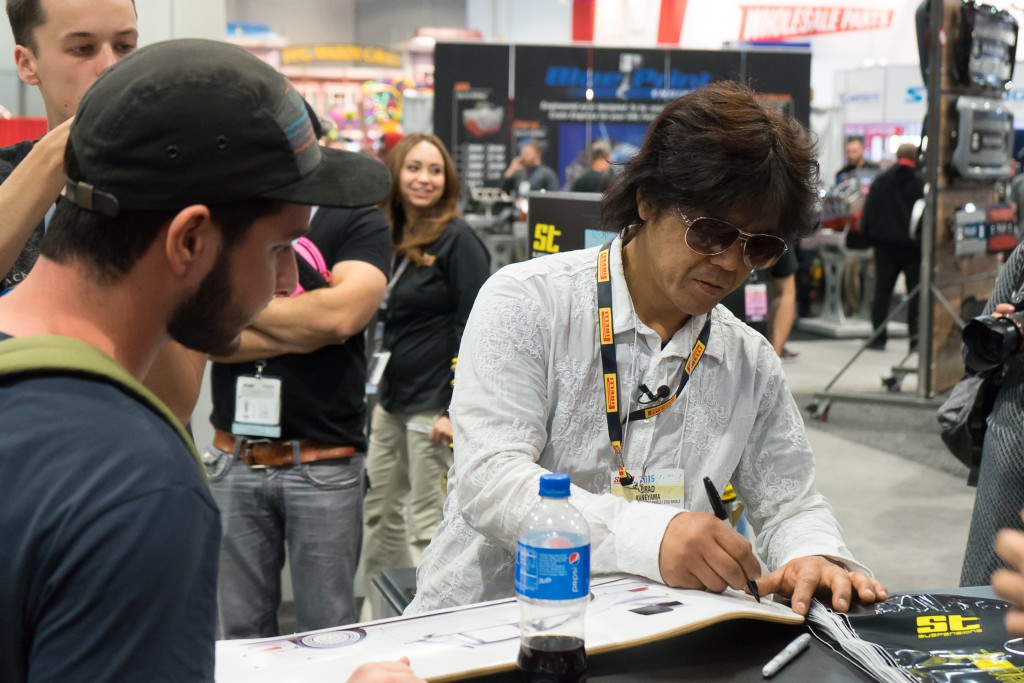 He also did a quick autograph session and somehow someone lent Akira a ticket for entering the SEMA show … Good guy, whoever you are I’m thankful!!

Also Sidney Hoffmann was very happy. He got the chance for a smalltalk with Akira Nakai and maybe we will se a RWB Porsche in Germany soon. 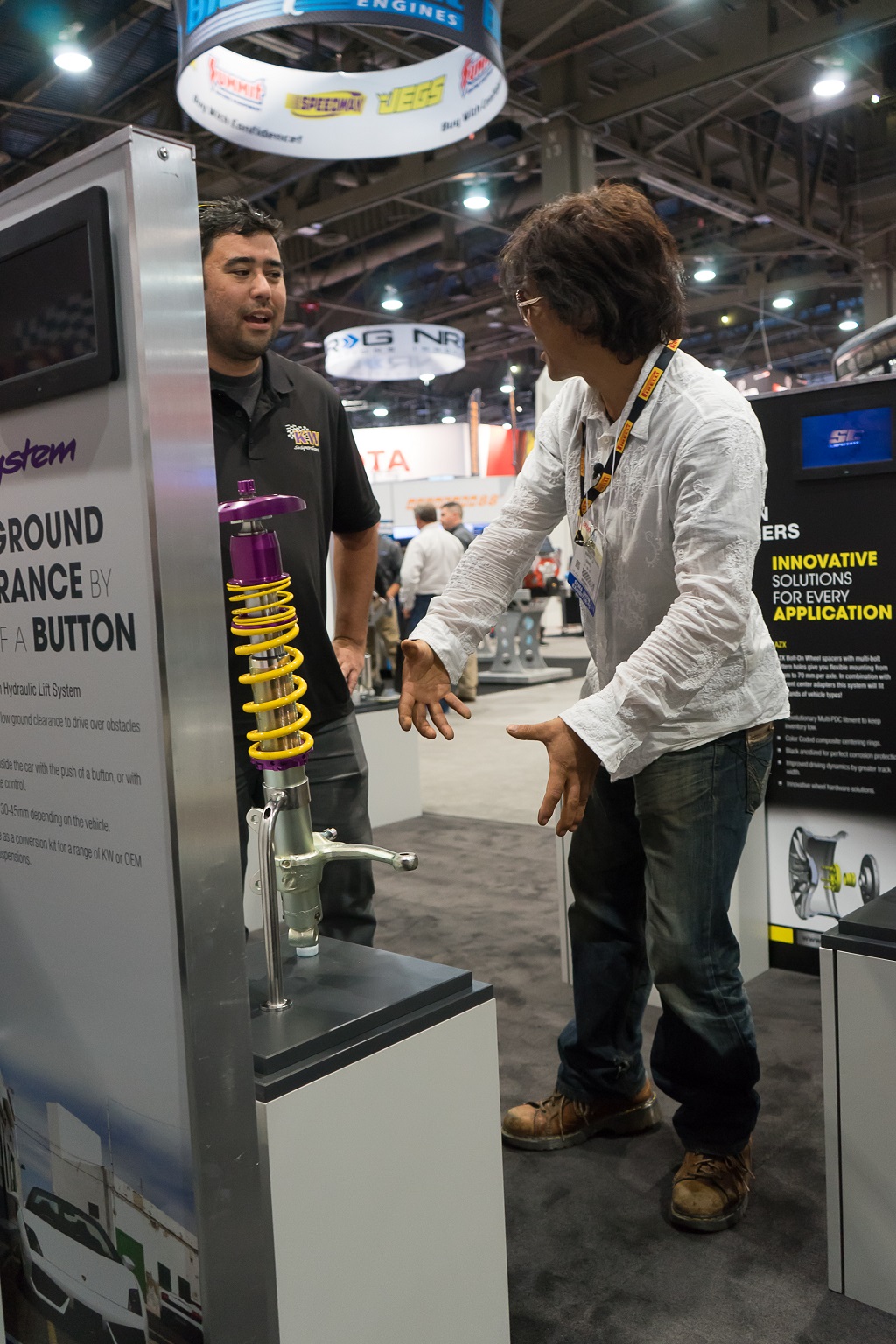 Later the day Chris Marion of KW US told me some new Rauh Welt Begriff projects are coming soon and Akira Nakai asked him for a very special static suspension he’d never get from any other suspension specialist. By the way if you ever want to see the birth of a Rauh Welt Begriff Porsche, please click here.