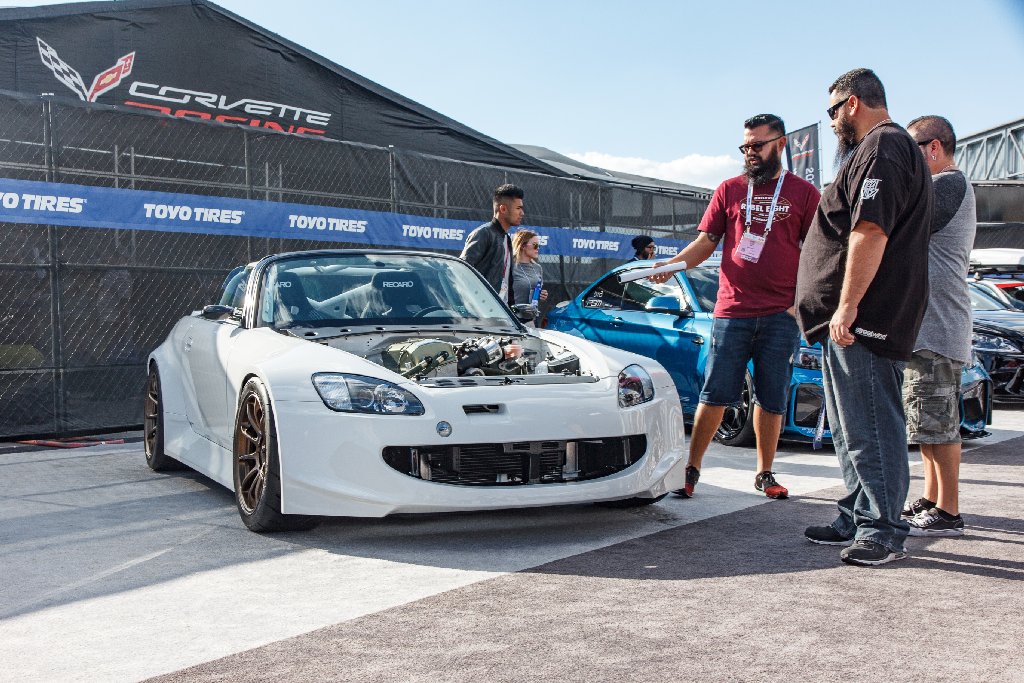 #Wasistdas? This is one of the coolest JDM cars of the SEMA Show 2017! For real? Yes, because at this Honda S2000 from Rywire Motorsport Electronics, the function is more in the foreground than the show & shine style. 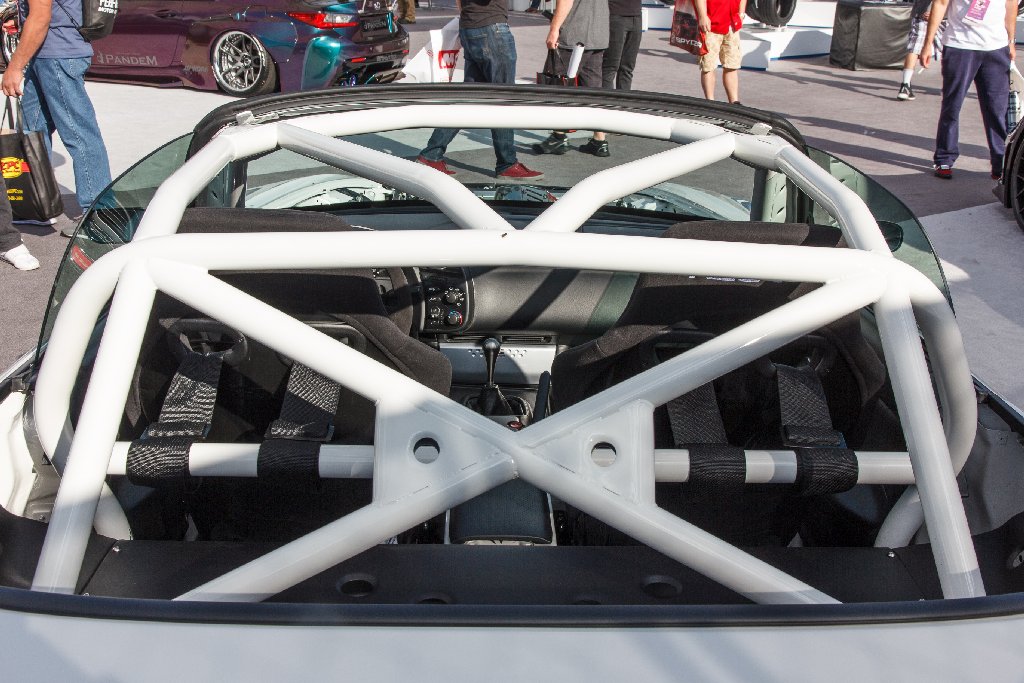 The soft top of the 17-year-old Honda S2000 (AP1) had to make way for the roll cage, just like the covering in the fond. Also the entire carpets had to go, just like the series sport seats. Sporty replacement is offered by two Recaro bucket seats. 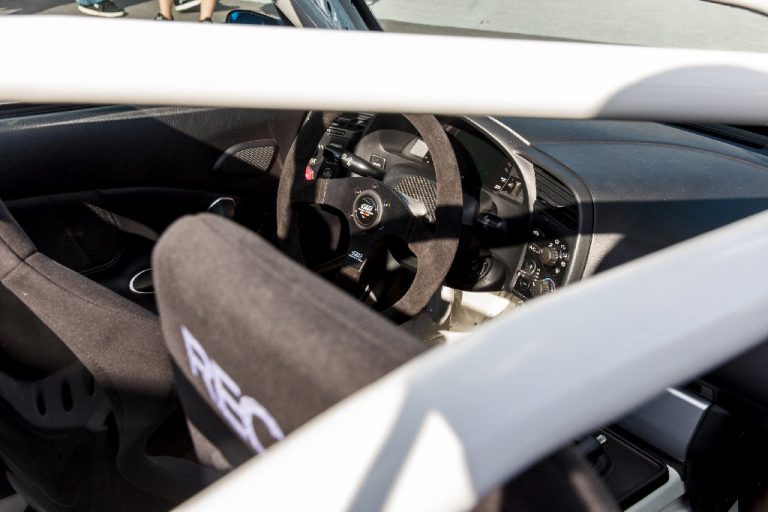 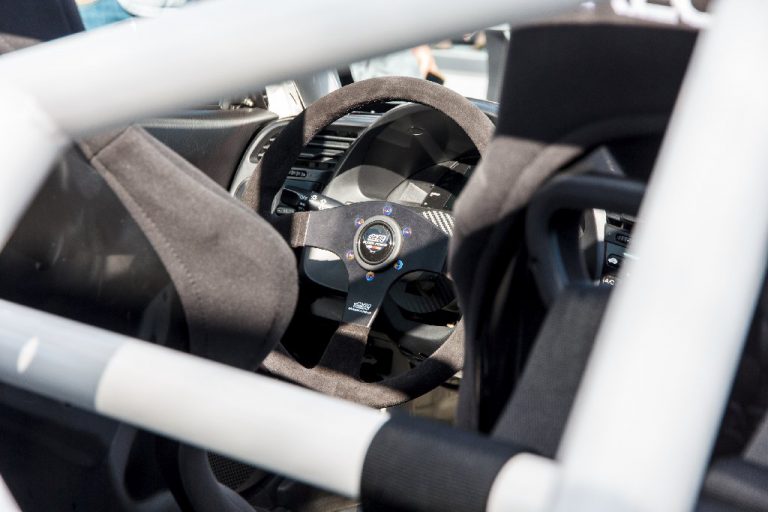 Like the seats, also the Mugen sports steering wheel wears Alcantara. The style-defining Honda S2000 speedometer left for the digital racing display; after all, the modified engine is the highlight of the JDM roadster. 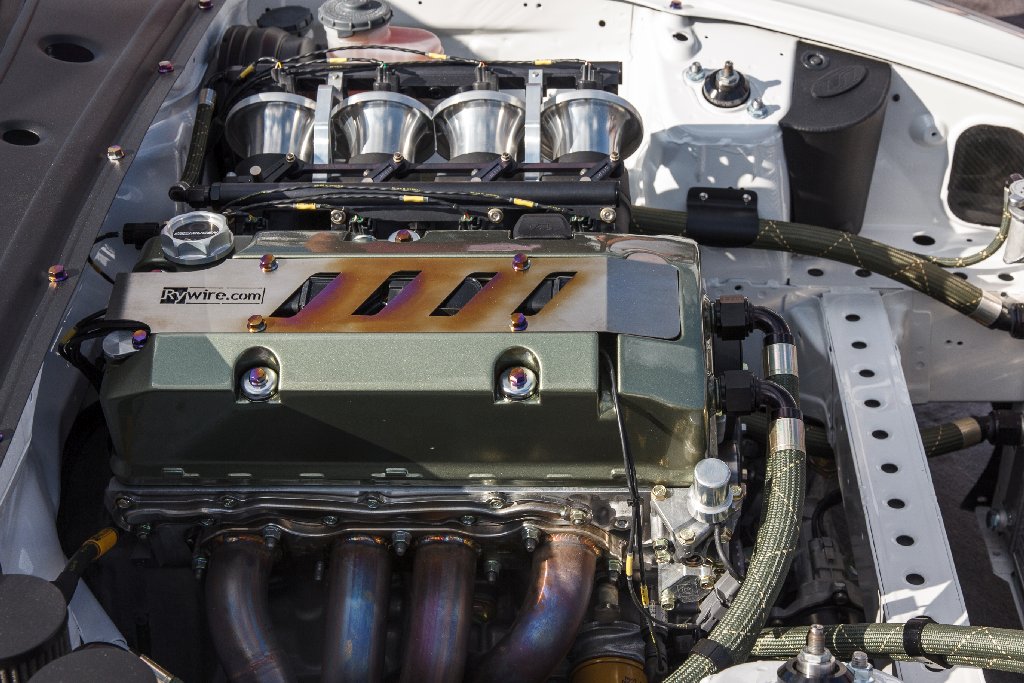 The high-revving “four-cylinder barrel organ” received an increase in displacement to 2,5 liter with a new crankshaft, new piston, piston rings, connecting rods and Co. But that was already a while ago. The Honda was standing in Ryan Basseri’s hall for a few years.

Ryan founded his workshop Rywire Motorsport Electronics more than 12 years ago and the company’s specialty is the manufacture of complete wiring harnesses, single wiring looms and much more. 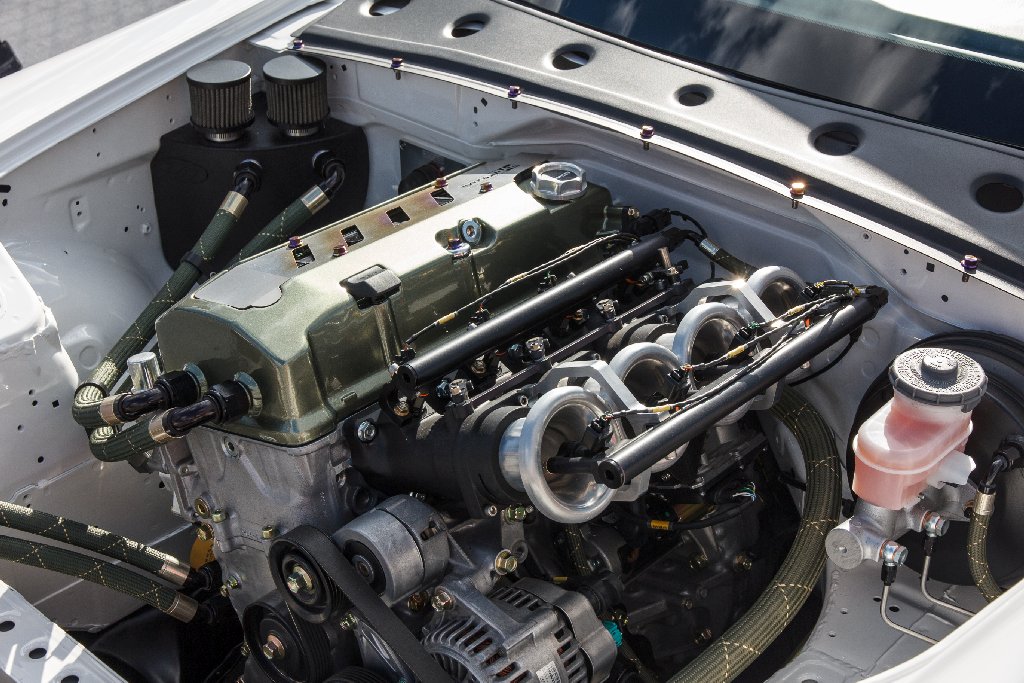 The visitors of the SEMA Show, who strolled over the “Toyo Tires Treadpass” between the “Central Hall” and the “South Hall” could barely trust their eyes. The four-cylinder was not trimmed as usual to more power by turbo conversion, but Rywire has installed an open Kinsler single-throttle system with freely programmable gasoline injection with eight nozzles! 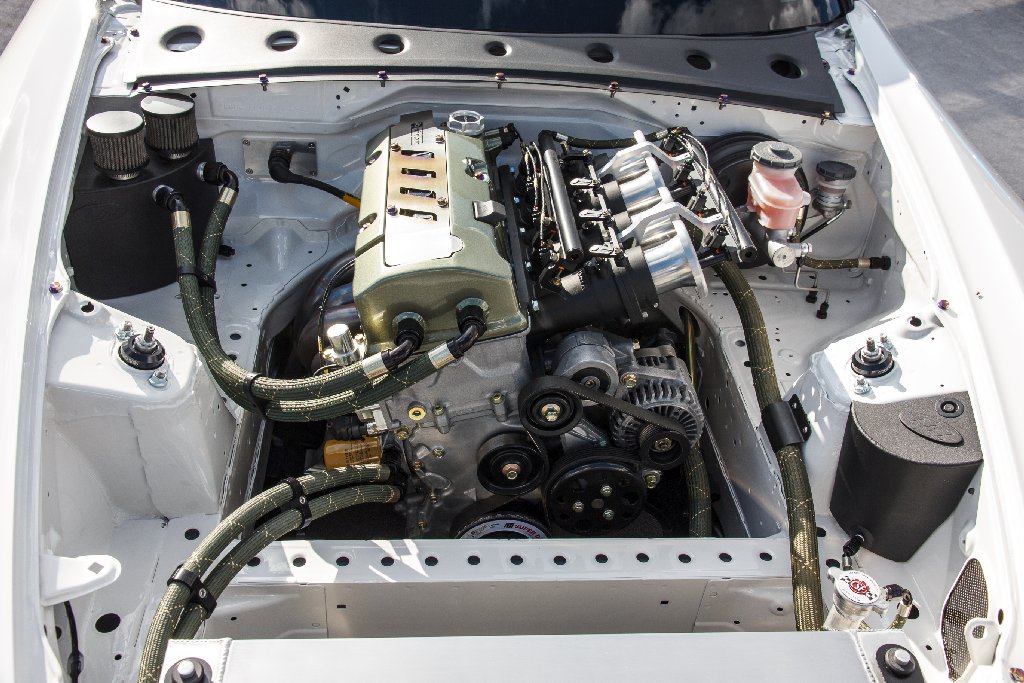 The engine compartment has been cleaned up a bit by Rywire, but the various original openings in the body and the engine mounts were not cleaned. This way, the entire conversion looks much more authentic. Various pipes for cooling, gasoline and oil circulation are also from Rywire. But enough of the “inside” – the JDM Roadster has much more to offer. 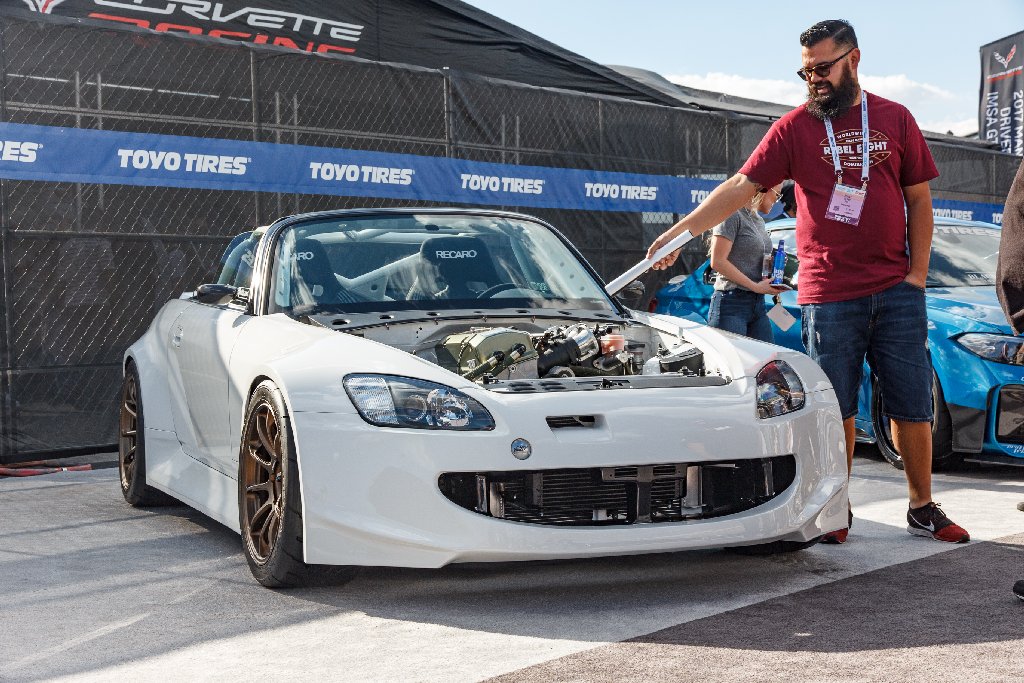 The mounted body kit is not just a component of a Mugen SS body kit, but Ryan Basseri asked Cody Casale for a little more styling assistance. 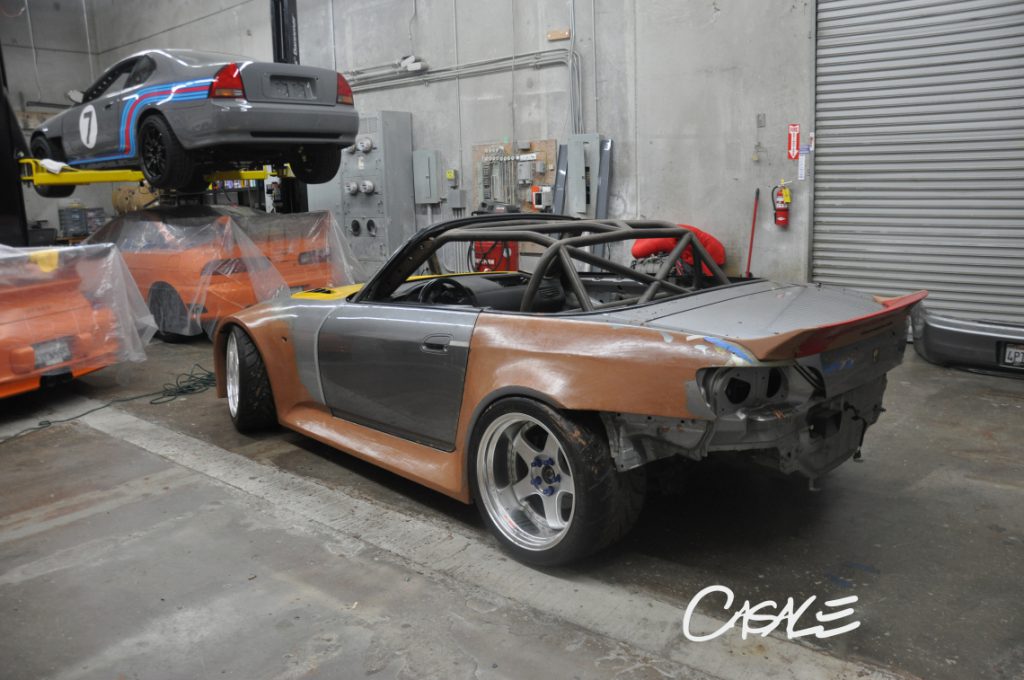 The industrial designer has been involved in various SEMA show projects with his company Casale Design LLC and is also responsible for the wide-spread construction that is only recognizable on a closer look. JDM fans can even purchase one or the other handcrafted accessory directly from Cody; as far as he is not sitting in a lecture, as he also studies Pasadena Transportation Design at the “Art Center”. 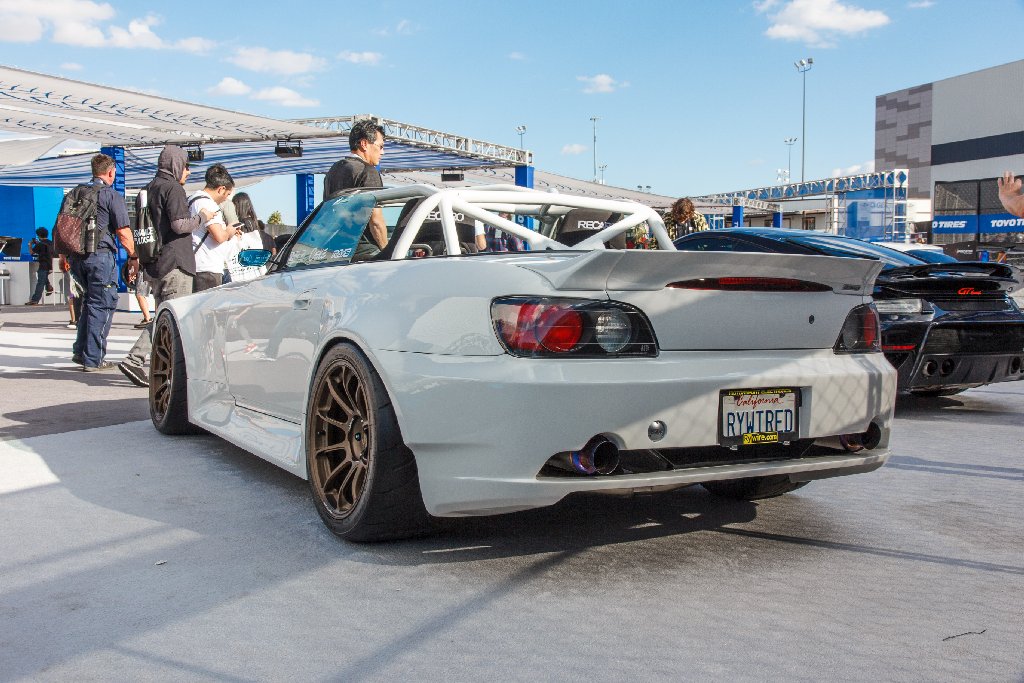 The fender flares, side skirts and modified Mugen rear apron are a creation of Casale Design.

Also the tear-off edge was created in Cody’s workshop, which in the end took on the formal language of a Mugen tear-off edge, but it turned out to be three-piece and a little bigger. 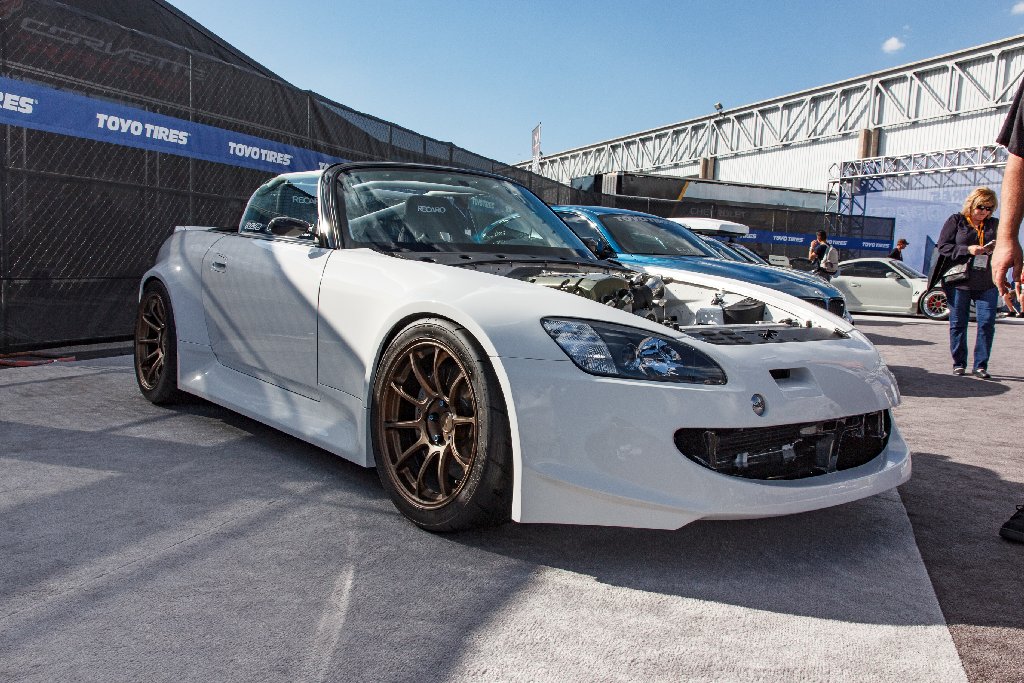 Also the Mugen SS front bumper, which has already been fitted for some time, received an additional styling element. Cody put on edges which go sideways and slightly obliquely upwards; of course the apron was adapted to the new width. In terms of suspension, a KW coilover kit Variant 3 was selected that is independently adjustable in compression and rebound forces. 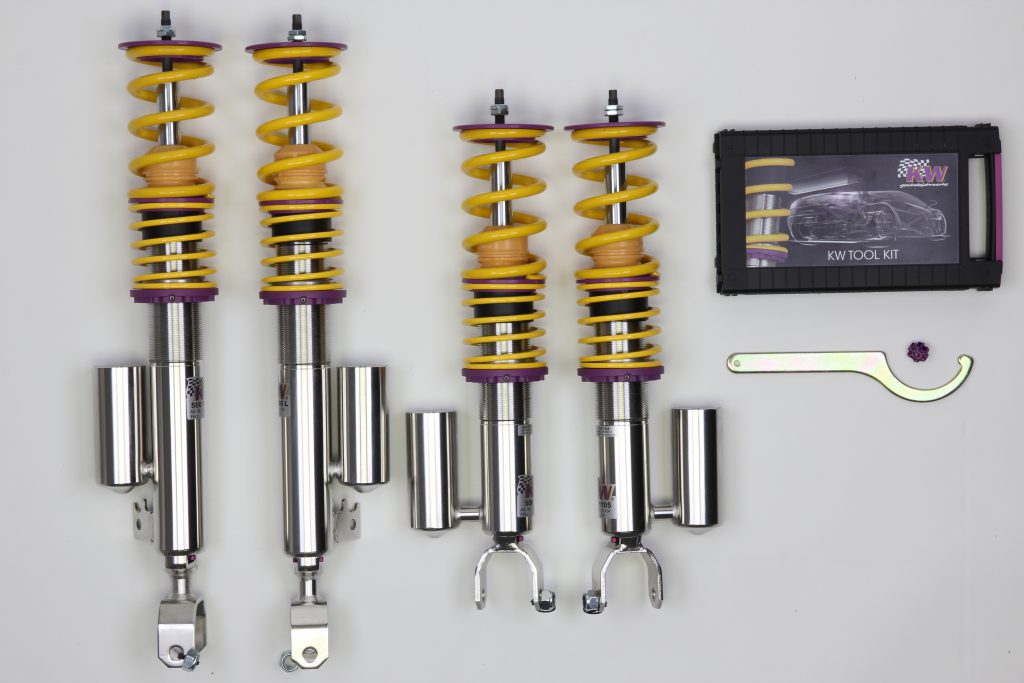 The rear-wheel drive Honda S2000 Roadster is famous for its sporty driving behavior. That in terms of driving dynamics you can put something here and there, was proofed by us from KW for over 25 years. Since the S2000 – which in our opinion would already have deserved a legitimate successor – has an independent single wheel suspension (double wishbone axles with A-arm), of course we are using four struts made of stainless steel. 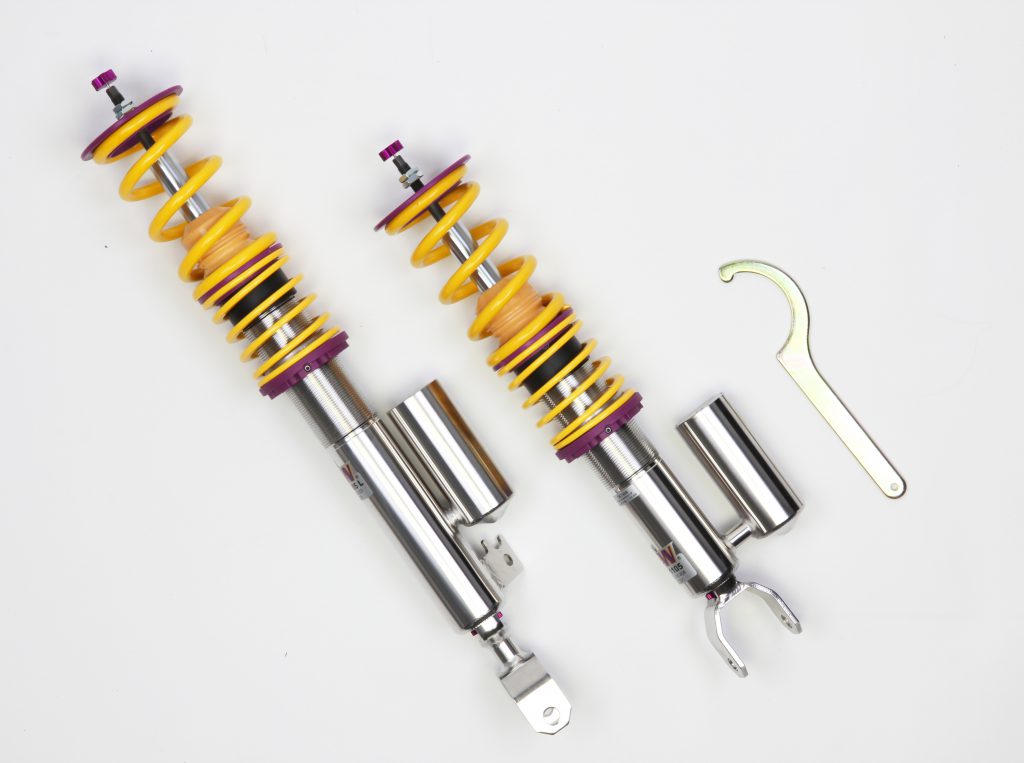 The Variant 3 for the S2000 also has linear springs as well as in compression and rebound independently adjustable dampers just like the KW Clubsport 2-way coilover suspension; but there is a huge difference between the two coilover kits:

While for our Clubsport coilover kit a regular track use with semi-slicks is in focus, the Variant 3 focuses more on everyday driving with road tires. For this reason, for the Variant 3 we use completely different components and individual parts (valves, rebound sleeves, bump stops, …) for the damper construction to achieve a different response. 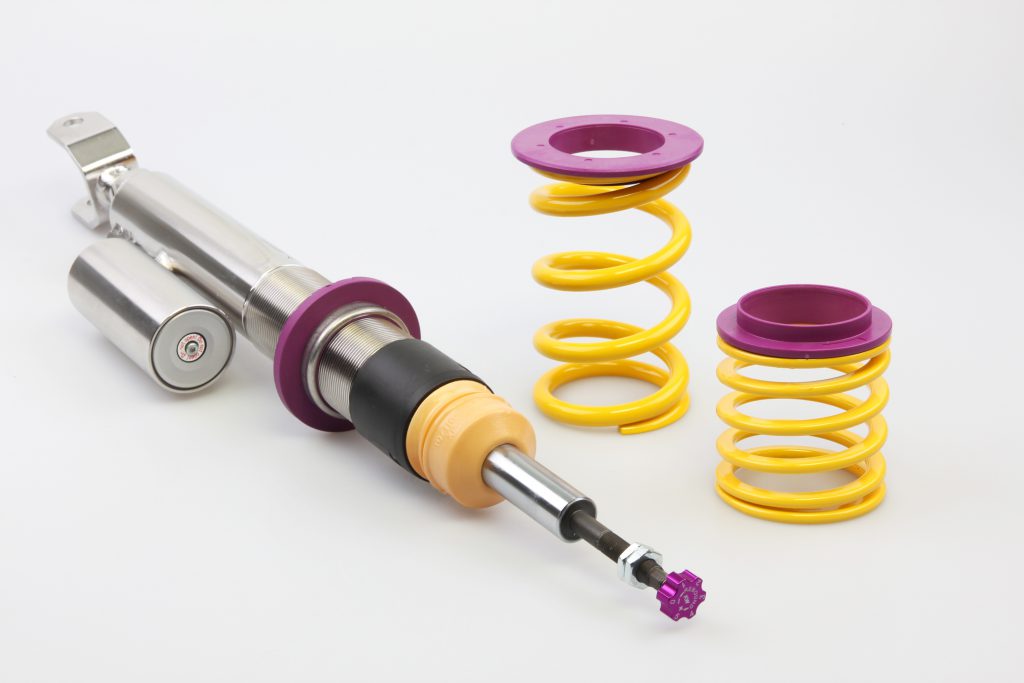 In addition, the KW Clubsport coilover kit is equipped with aluminum Unibal top mounts and also the spring rates and valve assembly differ seriously. It does not make much sense to simply equip a Variant 3 with Unibal top mount or even to mount tighter springs for a serious track day.

Those who drive their Honda S2000 (or another vehicle) most of the time on country roads or the highway and barely drive on a racetrack; make just everything right with our Variant 3! 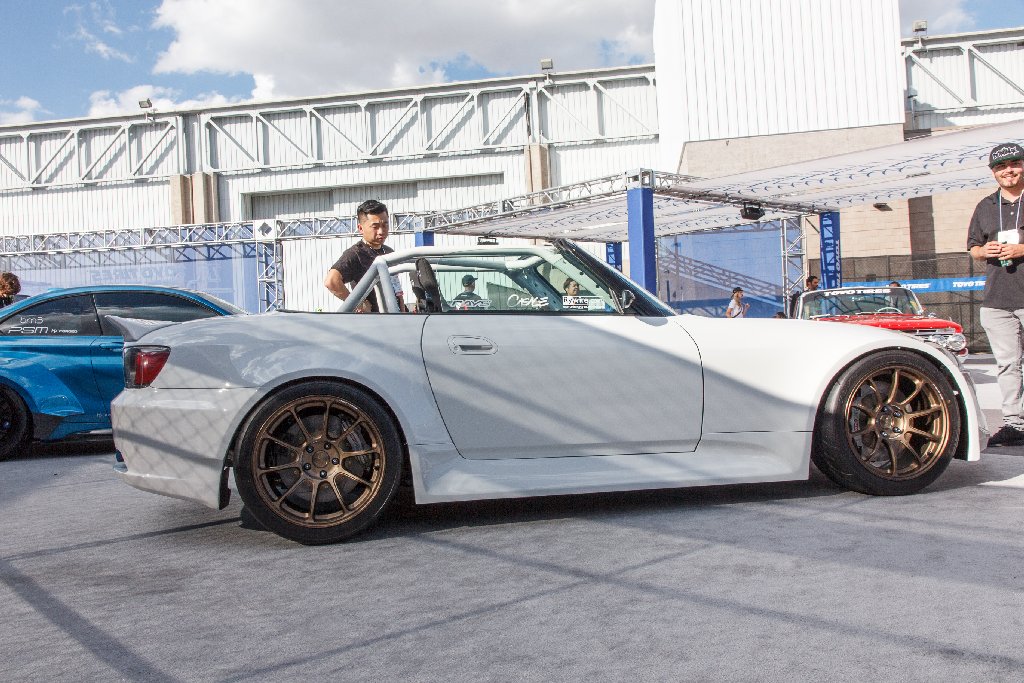 Ryan also did everything right with the question of the perfect wheel-tire combination in connection with the lowering by the KW coilovers Variant 3. 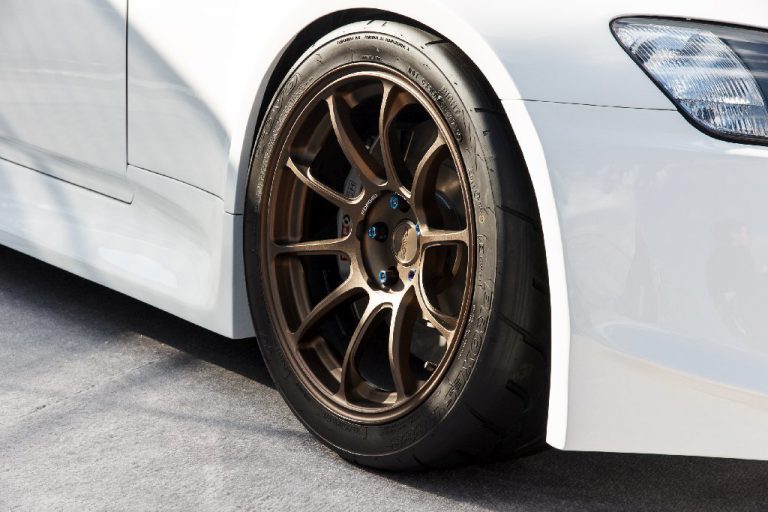 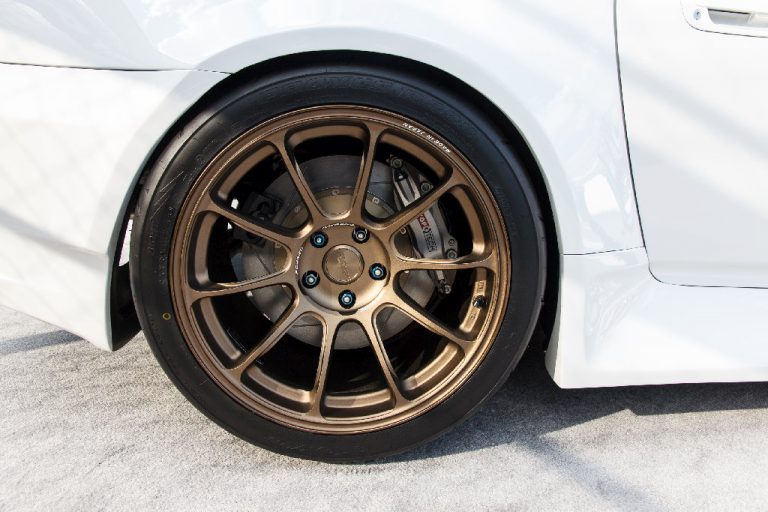 At the front axle, the classic Volk Racing ZE40 measure 10 x 18 inches and behind the spokes of the “JDM icons” a StopTech brake system is installed. On the drive axle, the rims bring up 12 x 18 inches – thanks to the wide fenders this is no problem! 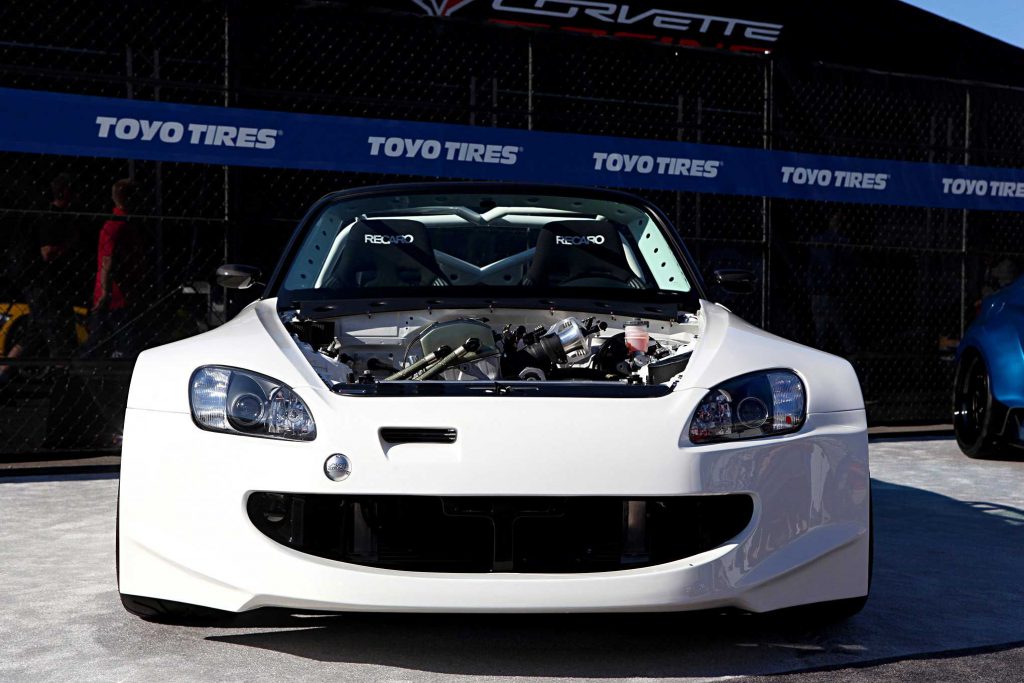 Ryan did not tell us how much power the Honda S2000 now actually has with its single-throttle system, but that doesn´t really matter. We much more like the fact that the Honda S2000 is simply classic clean and does not appear like a “typical Fast & Furious”-racer. But actually the so-called “Furious-Ricer” also had something special …