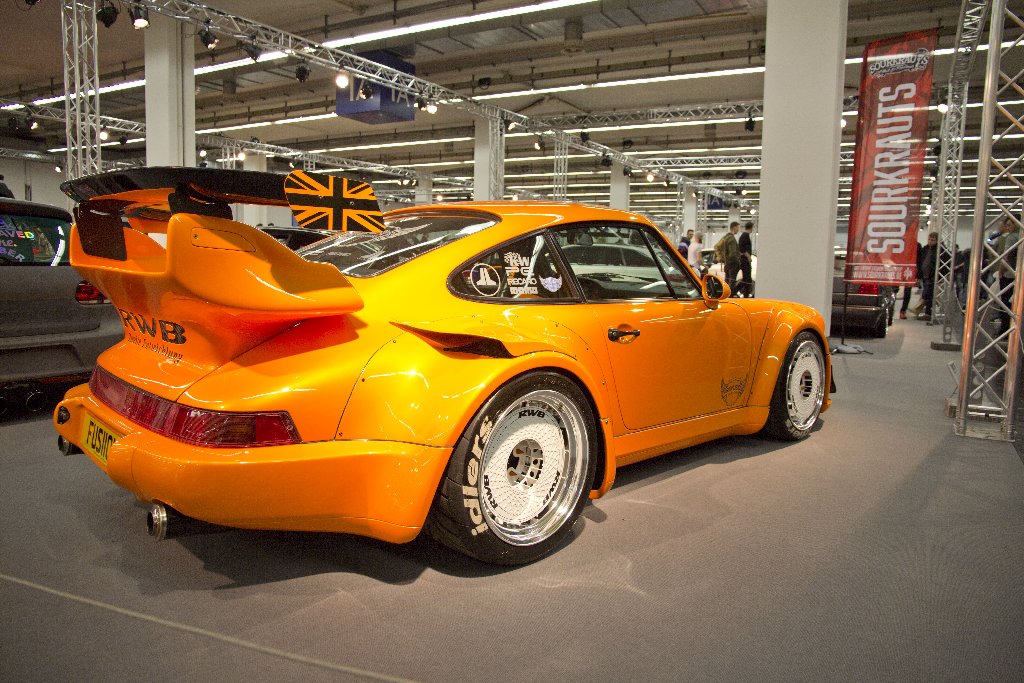 This color, this light, these wheels and these shapes – in the showground of the Essen Motor Show I quarreled with the aperture, the ISO and the exposure to light. I was just not able to capture Hibiki’s paint dress in a way, as the light is actually being reflected in the orange color.. In no video, on any blog and even in any magazine, the colleagues have really managed it to capture the “Sunset-Pearl-Orange” as the color actually is in sunlight. 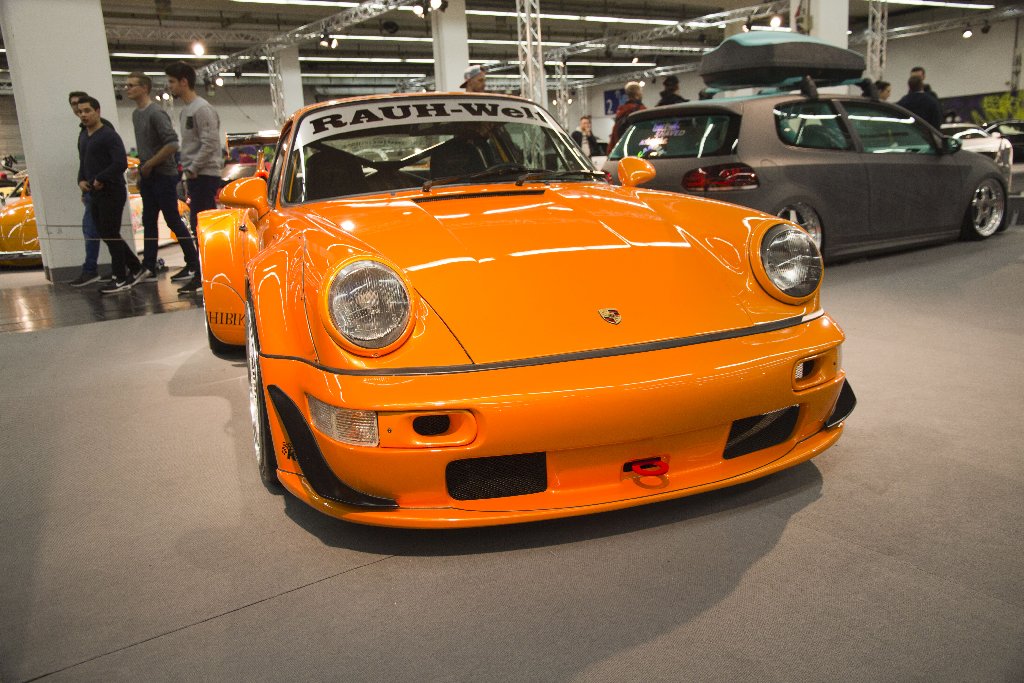 Maybe I should just get Max’s old analogue Pentax 67 medium format camera, grab a tripod and take pictures of my personal highlights after the official trade fair. Then I could catch the warm glowing Sunset-Pearl-Orange much more realistically. Unfortunately, many editorial offices cannot process analog pictures anymore. But that would be an idea to photograph a Rauh Welt Begriff Porsche with a camera that is just as old as the respective 911.

At Hibiki, that’s the name of the 964 from Raj Jagdev Proud and his father Jag, analogue photography would actually not be that difficult. When their 911 was built in 1991, there were already analog cameras with autofocus and the first steps of image stabilization. Incidentally, the two British who build exhaust systems under the label “Profusion Customs” are the first on the British Isles to build a RWB Porsche by Akira Nakai.

Anyone who has been following the fascination of Rauh Welt Begriff a little longer knows that not everyone can drive a RWB. No, I do not mean because of the budget. But even if someone can pay around 30,000 Euro for a RWB conversion, you cannot simply visit the RWB online shop and order a kit there. It’s a little different in the RWB community. Here, the old etiquette guide still counts: Business is completed between people. If Akira Nakai and his “inner circle” are not on the same wavelength with the potential RWB customer, then no RWB will be built for him. It´s that simple. 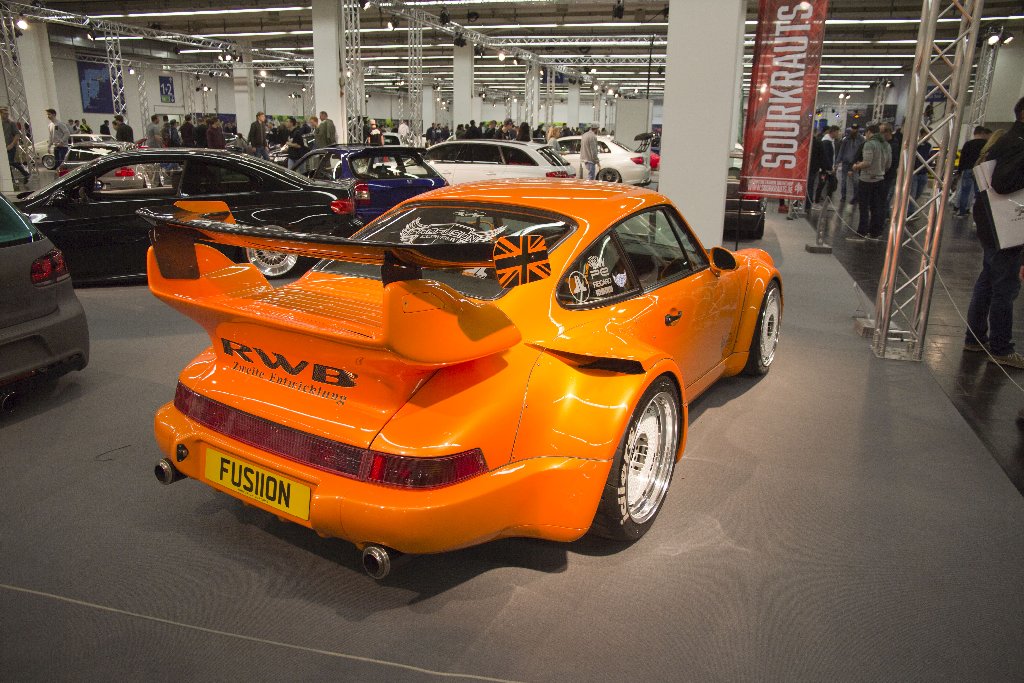 Fortunately, the two Britons and Akira Nakai share the same Porsche enthusiasm. Raj Jagdev and his father decided to get the 964-RWB-widebody and modify it with additional fender tearing edges and air vents. A style that once also Sidney Hoffmann of RWB Germany chose for his “RWB Furusato”. Even with the rear wing, the two “RWB” look a bit alike. But Sidney’s first RWB is a 993 and the British chose a 964 as “Rauh-Welt-base”. 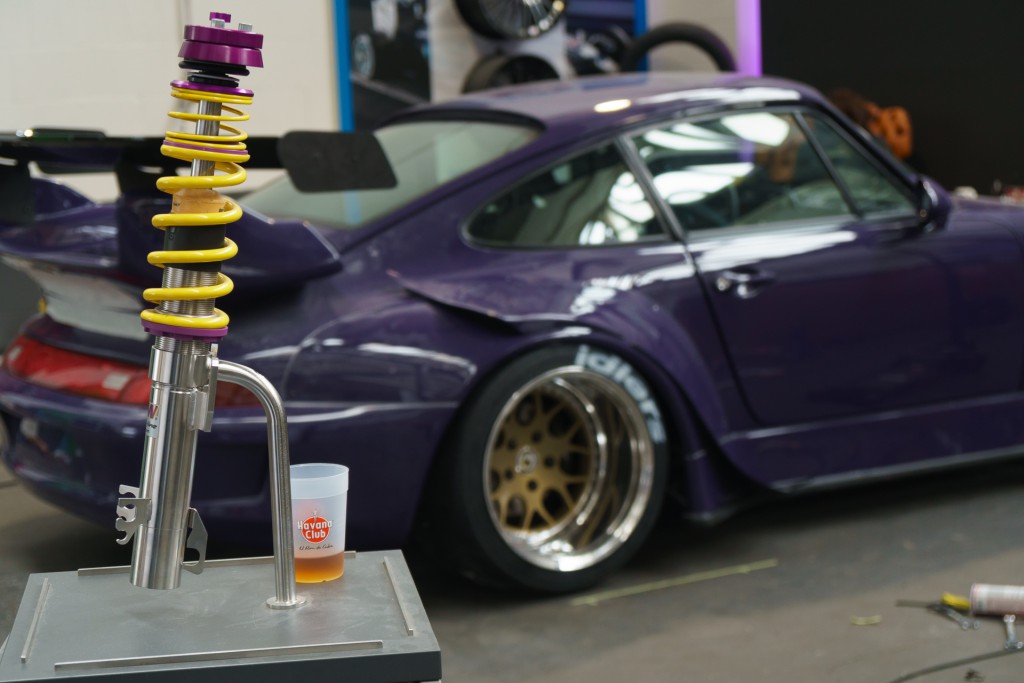 Both RWB Porsche, like so many other Porsche cars, are also equipped with a KW coilover suspension. In the UK, they decided to get the KW Variant 3 that is independently adjustable in compression and rebound stages and extended it on the front axle with our hydraulic lift system: the KW HLS. 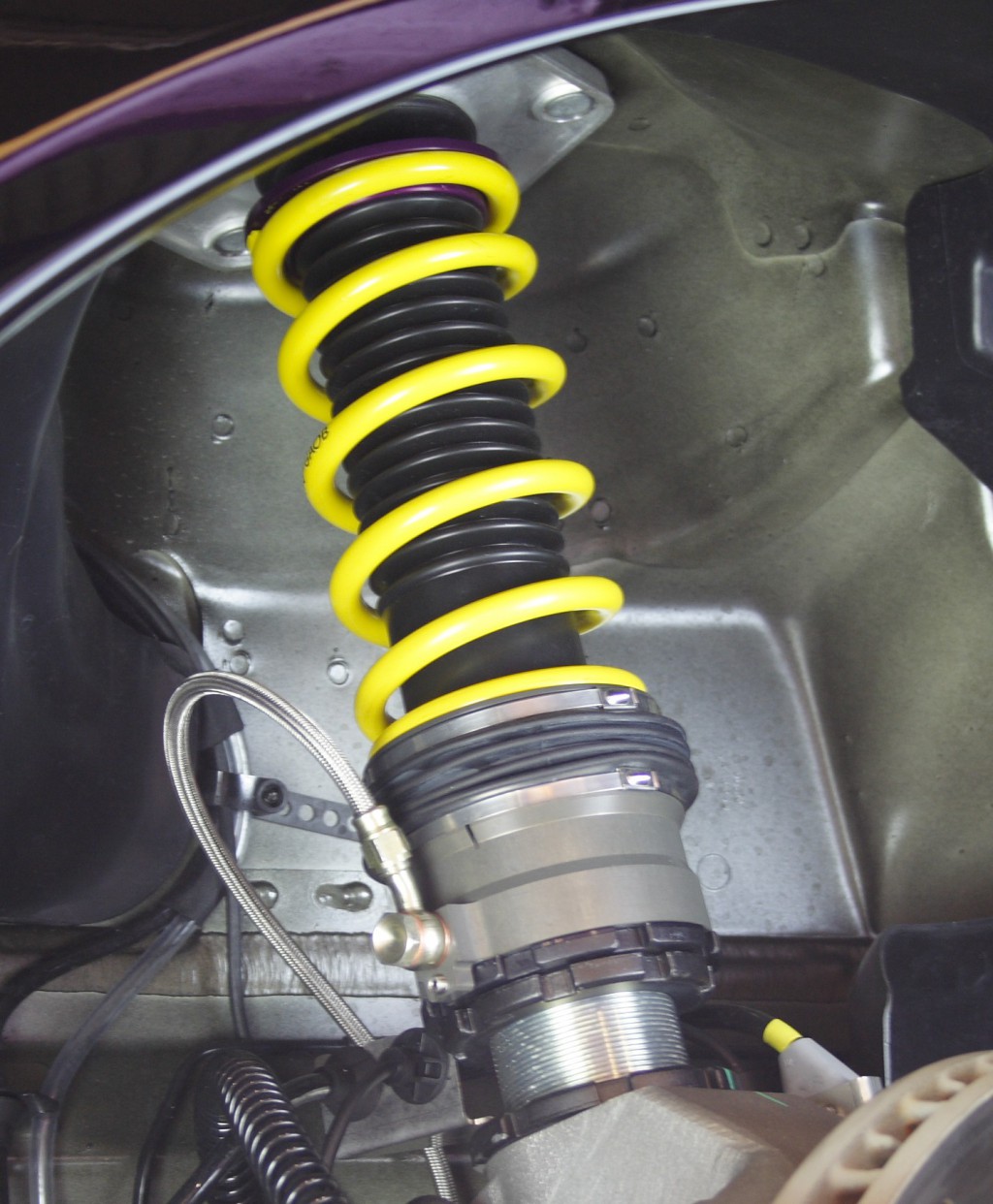 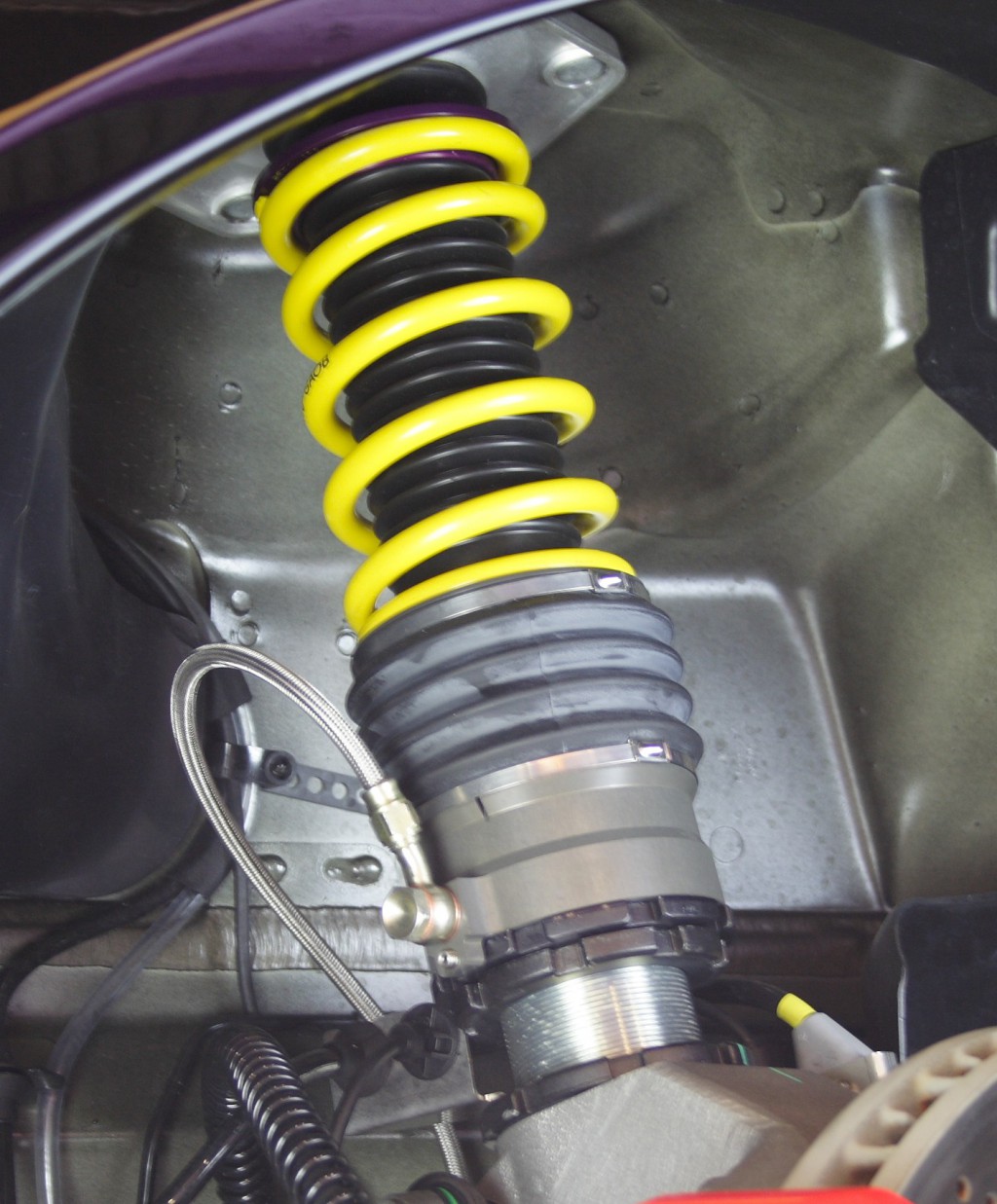 The HLS is a hydraulic lifting cylinder unit that is mounted between the spring plate and the spring directly on the strut, and by the push of a button it lifts the body by 45 millimeters. Compared to applications with air bellows, the KW HLS also has the driving dynamic advantage that the used KW springs are perfectly adapted to the respective HLS kit and the vehicle and the spring rate does not change when the Hydraulic Lift System is activated or deactivated. 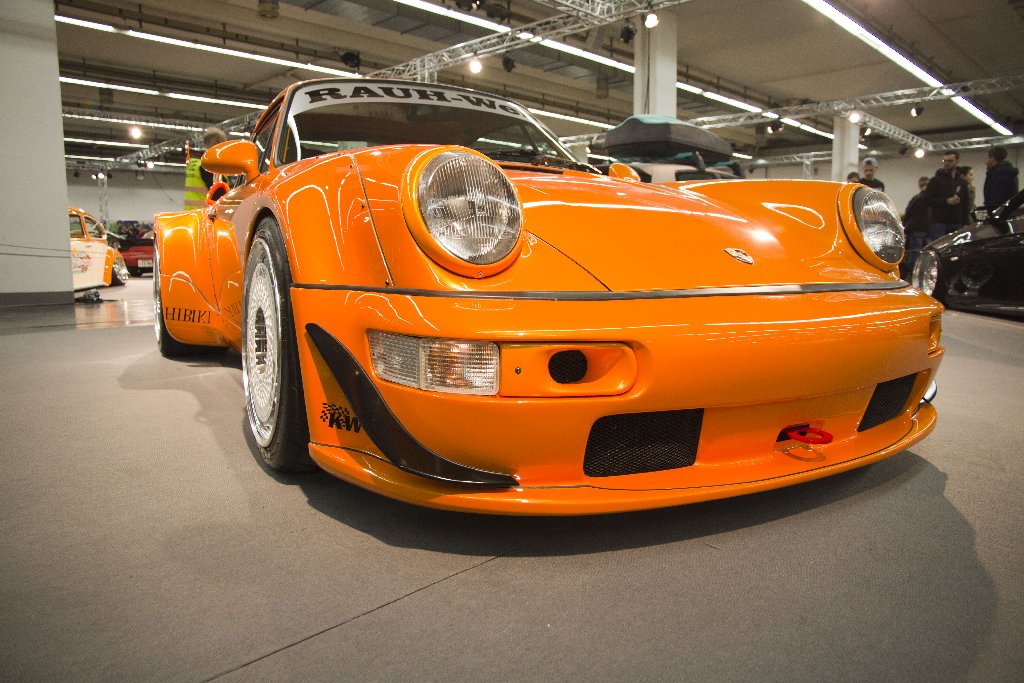 The HLS is always the last resort for RWB and other sportscars drivers, if the performance and the everyday suitability shall not suffer. Because who wants to sacrifice his RWB front apron for a parking garage ramp or a speed threshold? 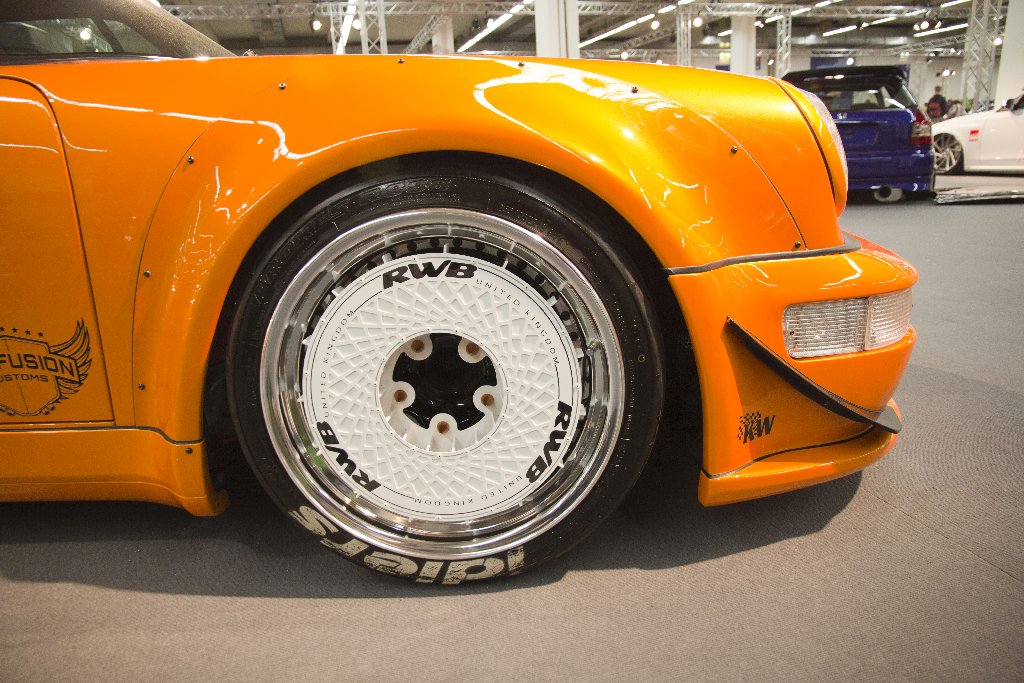 My personal highlight at the Hibiki are the KW HLS and the rare Japanese Work Meister S1 rims in 10,5 x 18 inches ET-1 and 13 x 18 inches ET-71 with custom rim star aperture. Although the RWB has received a comprehensive engine conversion and also the entire technology and the interior was revised by the British family business Profusion Customs (www.profusioncustoms.com); but the rim design and tire dimension overshadows everything. Just imagine, 255/35-18 and 335/30-18 – on a 964! 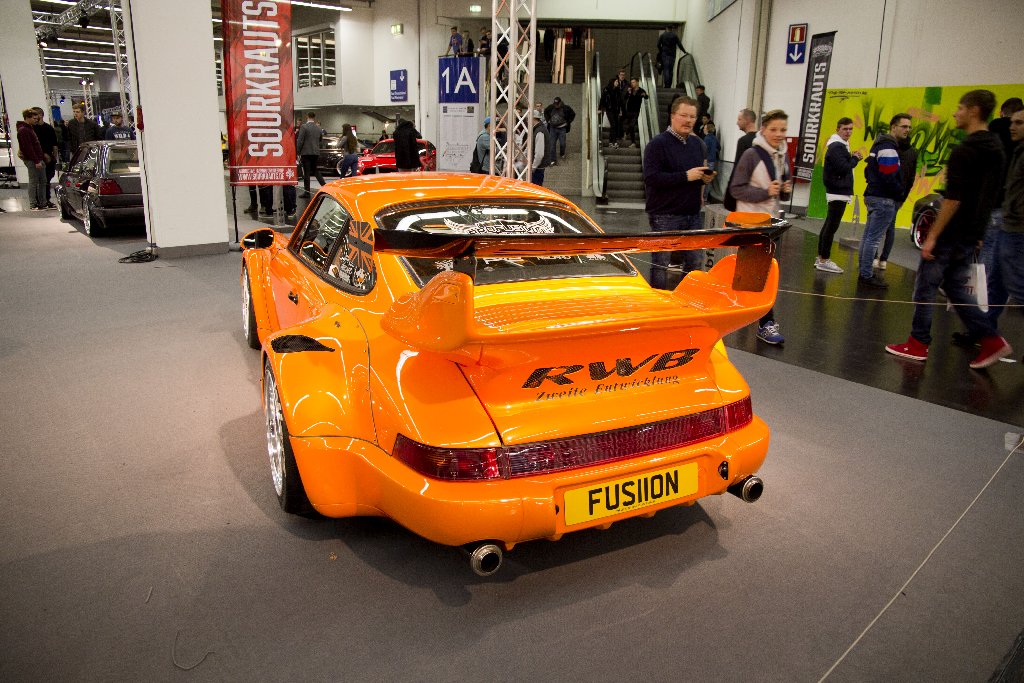 No wonder the so-called “Royal Wide Arches” turn out to be so wide. This is trumped by the RWB-GT2-wing with champion spoiler. At the Essen Motor Show 2017, Hibiki was not the only RWB Porsche and within all the crowding on the weekend, I have discovered at least three conversions – how many did you see in Essen?